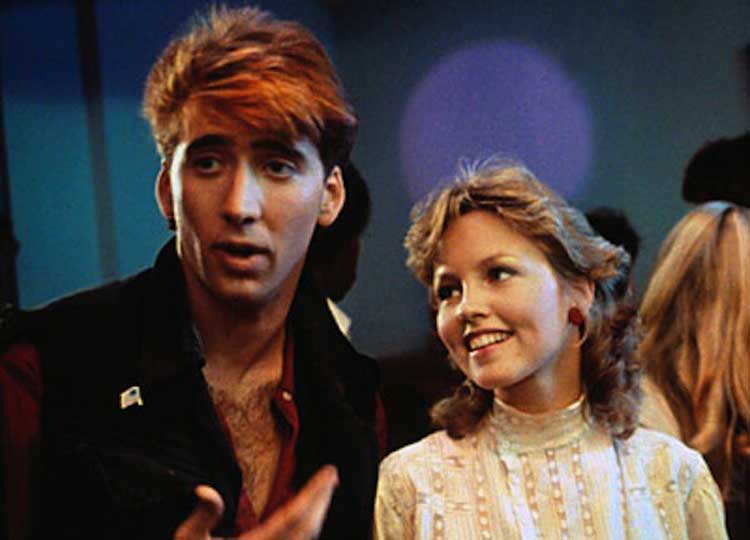 Valley Girl: That Techno Rock You Guys Listen to is Gutless

After watching Raising Arizona, I decided to go back even further and catch one of Nicolas Cage’s earliest performances. In fact, Valley Girl was the first movie where he actually went by that last name instead of using Coppola. Released in 1983, this comedy stars Deborah Foreman as Julie, a girl from the valley disillusioned with her dumb jock of a boyfriend.

Cage’s Randy is a gentle punk from the other side of the tracks in Hollywood. He crashes a rich kids’ party with his buddy Fred and hits it off with Julie. After an exciting night on the town, they begin a star-crossed relationship. But her are determined to split the couple and bring her back into their clan. Even though he’s a complete tool, Julie’s ex-boyfriend Tommy (Michael Bowen) remains a possible option as the peer pressure heightens to dump Randy.

This movie stands out from many peers with a classic soundtrack that sets the story perfectly in the early ‘80s. The main theme for Julie and Randy is Modern English’s “I Melt with You”, which plays over their relationship montage and then reappears later. It remains timeless and hasn’t become laughable kitsch like many tunes from that era. Randy’s theme songs come from The Plimsouls, who perform several tunes at a rock club like their signature tune “A Million Miles Away”.

Although Cage isn’t entirely believable as a young punk, his character’s rejection of the fake aesthetics of the valley is refreshing. The actor’s finest moment has Randy at his lowest, stumbling around drunk at a club after being dumped by Julie. During this sequence, we see flashes of the crazier Cage performances of the future like in Bad Lieutenant: Port of Call New Orleans or Leaving Las Vegas.

Valley Girl has a relaxed charm that has attracted many fans over the years, and part of that draw comes from its flaws. First, Foreman looks way too old to be a junior in high school, even though she was just past 20 when it was released. Even worse, Bowen was nearly 30 at the time and looks creepy when putting the moves on the teenagers.

Another silly fact is the small age difference between the actors playing the parents and their kids. Colleen Camp plays Julie's mom and was only nine years older than Foreman, so she spends the entire movie wearing ill-fitting clothes and sporting unattractive glasses. These are all minor things, but they actually add fun and match the goofiness of the entire picture.

There’s also not much story or logic to be found with the characters’ actions. Julie is obviously in love with Randy, and Tommy is definitely a jerk who hits on everything that moves, yet she actually considers going back to him. Even if she decides her social status is more important, why go back to Tommy? There have to be a few nice guys with money. According to this film’s world, that actually might not be true, though.

This is an R-rated comedy with some random nudity, which seems out of place with the pretty virtuous main romance. Taking out a few raunchy discussions, the overall tone is more in line with a John Hughes movie than a nastier film. Director Marsha Coolidge takes a shot at delivering both an innocent and candid look at teens, and it works for the most part. It’s not a genre classic but has enough unique fun to make it worth your time.