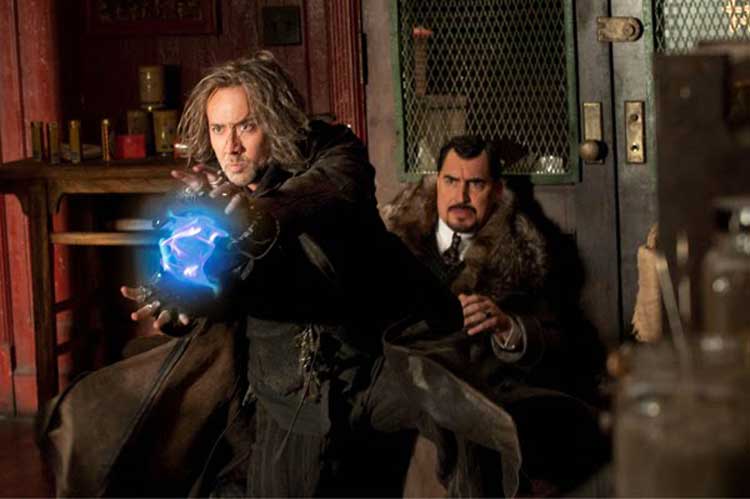 I don’t feel that a Nicolas Cage marathon is complete without seeing one of his recent exploits into mainstream adventure films. I wasn’t ready to spend two hours with a National Treasure movie, so I chose The Sorcerer’s Apprentice, a modern take on the Disney animated short from Fantasia. This 2010 big-budget feature has little in common with the original besides one scene involving magically enhanced mops getting out of control.

Cage plays Balthazar Blake, an ageless sorcerer from the times of Merlin who learned under that famous wizard. Over the centuries, he’s protected our world from the dangers of Morgana La Fey (Alice Krige), who’s trapped in a nesting doll. Hoping to bring her reign of terror to our modern world, her ally Horvath (Alfred Molina) escapes and starts causing havoc. Balthazar needs help to save us, and he gets it from an unlikely source, bumbling college student Dave Stutler (Jay Baruchel). This awkward guy is actually a sorcerer prophesized to defeat Morgana, but he has no clue. Balthazar must give a crash course in magic with little time to spare. Dave’s more interested in trying to date his childhood crush Becky (Teresa Pamer), now an attractive college radio host. We are so doomed.

Crazy, though his outfit qualifies as totally insane. Along with his curly flowing locks of hair, he’s wearing a large-brimmed hat, gloves with holes for his fingers, and a black leather jacket. Balthazar’s trying to keep magic a secret, but he’s definitely not inconspicuous. Cage has a few moments where he gets to act over the top, especially when battling Molina with magic, but I would have liked to see him go crazier. When the movie’s premise is this fantastical, you might as well go for it. At one point, Balthazar and Horvath reappear after being trapped in an urn for 10 years, and it’s like nothing’s happened. You’d think he’d want to catch up on the latest trends or pop culture.

Jay Baruchel actually receives the most screen time, though he’s really playing second fiddle in our interest. His style fit perfectly on Undeclared, but he seems determined to go even further here and creates a more grating doofus. Palmer is attractive but a bit flat as his love interest, but I think it’s more about the writing than her acting. I guess the five credited writers didn’t focus much on making her original. Molina is a good villain and just needs to sneer to create serious menace. Horvath’s a scary bad guy, even if his motives aren’t very clear. There was a love triangle that he lost to Balthazar eons ago. Is that supposed to be enough to explain his pure evil? Thankfully, Molina makes it work for the most part. 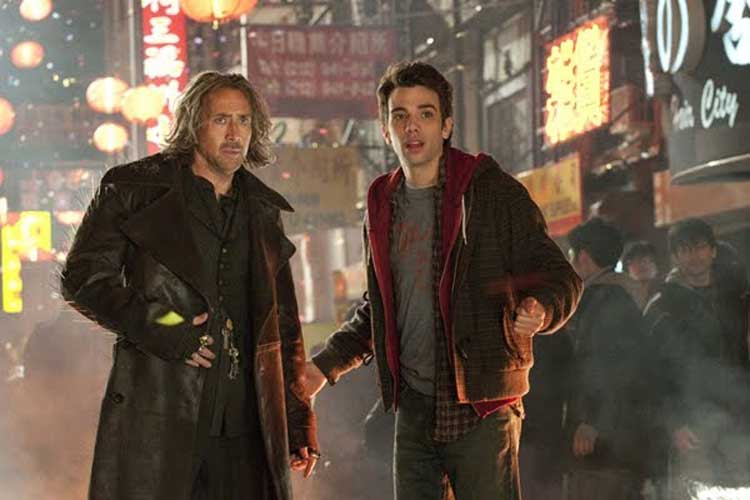 The Sorcerer’s Apprentice is directed by Jon Turteltaub, who’s known for such gems as 3 Ninjas, Cool Runnings, and the National Treasure films. This isn’t the type of movie that bears the stamp of a highly original director. Turteltaub’s job is to make sure the effects are believable and the action keeps moving. His success with some recent blockbusters has shown he can please audiences, but there’s little to recommend from him here. It’s okay work from a journeyman studio director who takes no risks.

This movie has large-scale visual effects in many scenes, and a few transcend the norm and are exciting. Horvath’s first appearance involves him being reconstructed from a huge group of nasty bugs. The sense of doom is best in this scene but isn’t recreated much later. The homage to the famous mops sequence works fairly well, but it seems tacked on more for Disney fanatics than to build the story. There’s also a grand, massive dragon magically created from a fake one in Chinatown that earns some chills. And you can’t go wrong with the giant eagle from the Chrysler building swooping over town at Balthazar’s command. Even Turteltaub can’t mess up that stirring image.

The Sorcerer’s Apprentice does provide some mild, family-friendly entertainment for a casual night at home. Cage’s screen presence helps the movie, though he doesn’t have to do much more than show up. I just wasn’t interested enough in Dave as the fabled apprentice. He’s supposed to be an unlikely hero, and I can get behind that story line. I just didn’t care enough about him and the ultimate survival of the world. The effects are well-done, and you can’t go wrong with Molina as the heavy. It’s ultimately a forgettable movie with some neat tricks in the middle.