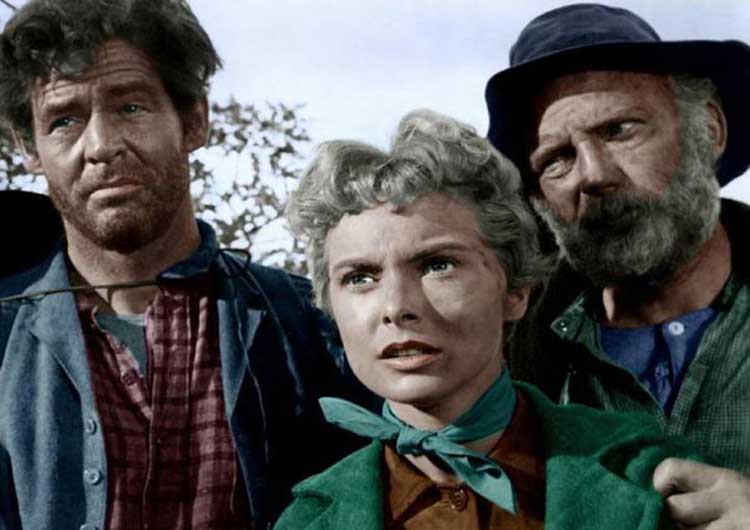 Now in his third collaboration with Jimmy Stewart, Anthony Mann is really clawing away at the darkest sides of the actor's personality. This intriguing minimalist picture brings five characters together and lets them work for almost the entire 90 minutes. There's a brief interlude with a Native American attack, but that's mostly designed to bring some action into a talk-heavy middle act.  The majority involves surprisingly bitter interactions between the group as they slowly break down into nasty internal battles.

Stewart stars as Howard Kemp, a name without the same flair as Glyn McLintock or Lin McAdam.  Maybe if his last name was McKemp, that would have worked better. Kemp is a cold bounty hunter tracking the murderer Ben Vandergroat, played masterfully with villainous glee by Robert Ryan. After ensnaring him with some deft moves in the earlygoing, Kemp aims to take him back to Abilene to be hanged. By chance, he's acquired the help of old-time prospector Jesse Tate (Millard Mitchell) and former Army man Roy Anderson (Ralph Meeker) to catch the killer. This makes them partners who aim to split the reward three ways for this capture. Vandergroat spots holes in this plan and exploits them mercilessly to gain an upper hand. Each guy has a weakness, and when large sums of money are involved, they become vulnerable to suggestion.

The intriguing part about this film is that Kemp is not a good guy and has hunted Vandergroat just for the money. He's also aiming to recover from being swindled, which makes him even more bitter. The other guys aren't so perfect either. Tate appears to be a charming old man in the vein of a typical Walter Brennan-like character.  But his thirst for striking a big score of gold could be a weakness. Anderson is considered "unstable" by the army and is fleeing from his own past. It doesn't take much to push this trio into some near-deadly fights over the reward. These confrontations are surprisingly brutal and showcase Stewart's ability to play crazy better than almost anyone. One showdown inside a dark cave reveals just how angry and far gone this once-proud guy really is. It's brilliant work from Stewart to make his character even more unlikable than the callous murderer. 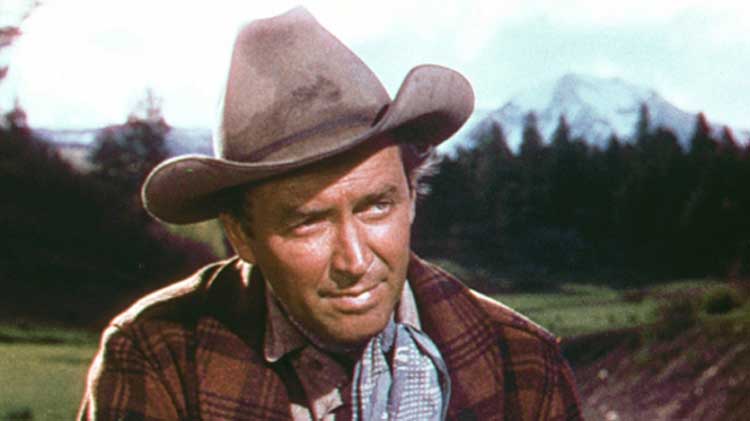 I love the way that Mann and screenwriters Leigh Brackett and Jules Furthman have found a way to take Stewart's gee-whiz persona and completely demolish it. The previous two movies revealed a few scenes where his characters went too far, but it was nothing like his vicious behavior here. He generally moves back from the ledge at the last minute, but the harsh emotions stay with you throughout the story. Ryan offers the perfect counterpoint to Stewart with his gleeful, clever character who's willing to do anything to escape. He bides his time and waits for just the right moment to strike.

Janet Leigh also does a solid job as Lina Patch and overcomes some issues with her thin character. Her relationship with Vandergroat is purposely odd, and the connection to Kemp is slightly inexplicable. Leigh also brings a rougher edge to this part than her prominent later roles in Psycho and The Manchurian Candidate. Mann still doesn't seem as interested in the female lead as the males, but this does mark an improvement in this area over the previous two movies.

I'd rank The Naked Spur on nearly the same level as Winchester '73, which reinforces my choice to do this marathon. I wondered if the other Mann/Stewart westerns would live up to their first collaboration, and thus far I haven't been disappointed. I've rarely seen any movies in the genre that depict such a small group of characters in such in an entertaining fashion. This is really a hidden gem for any film lovers. Next up is 1954's  The Far Country, with the great Walter Brennan!