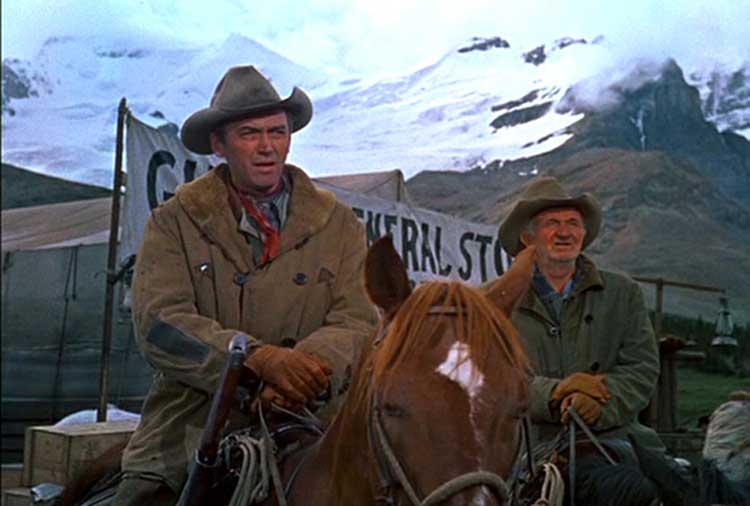 In their fourth collaboration, Jimmy Stewart and Anthony Mann finally hit a misstep with The Far Country. Many of the themes about civilization versus the wilderness, the corruption of money, and the grizzled loner against a mean group of villains are all here. However, it feels a bit too familiar and lacks the original charge of the first three pictures. The production is made effectively and stands well on its own, but it suffers when considered in the entire Mann/Stewart canon.

Stewart plays Jeff Webster, a cold, tough gunfighter who's willing to kill ruthlessly when it's needed. At the film's opening, he's returned from a cattle drive where he murdered two others for trying to leave. Webster doesn't see anything wrong with this act and refuses to accept the rule of law. Fleeing from the authorities, he meets Ronda Castle (Roman), who appears to share his attitudes. She's also pretty attractive, which makes her actions seem more helpful. As the story progresses, we'll learn that Castle is far from a good person, though it takes Webster a long time to figure that out. A second rival for his affections is Renee Valon (Calvet), a French-Canadian young woman who adores him. He's totally oblivious, though, and talks to her like a little girl.

Webster's primary opponent is Gannon (McIntre), a corrupt lawman who's angered when Webster interrupts a hanging. He uses the system to steal Webster's cattle, which is possibly the worst thing he could do.  When the “hero” takes his cattle back and journeys to Alaska, Gannon bides his time before striking back against his foe. Their gun battles are down and dirty and lack the majesty you might expect from a western fight. This follows Mann's tradition of depicting the nastiness of the old-school outlaws regardless of the nature of their intentions.

Stewart does solid work here playing yet another manic character, though it's not as clear why this guy is so difficult. There is some nobility still in Webster, but it takes a lot for the goodness to come out. His loyal friend is Ben Tatum (Brennan), who tries to keep his pal focused in the right direction. Brennan excels at this type of role, which Millard Mitchell has played a few times in the other Mann films. McIntre was memorable as the tricky card shark in Winchester '73 and brings the right level of conniving to Gannon.

The Far Country still provides decent entertainment but suffers in comparison to the other films in this marathon. One interesting twist is using a female villain, though she is given a last-minute reprieve that  reduces this change. Some experts cite the Calvet performance as a main issue, but I didn't have a problem with her work. The part is definitely under-written, though it goes along with Mann's use of women in each of his films. Calvet give it her best shot, and is more successful than the stiff Roman.

The main issue with this picture is the similarity to scenes from Mann's earlier films. A lot of the moments resemble Bend of the River, particularly when the goons disagree with Webster over the cattle drive. That film did a better job introducing the regular folks, who barely resonate in this movie. They appear halfway through the story in Alaska and don't carry the same weight this time. Next up is 1955's The Man From Laramie, the final movie!