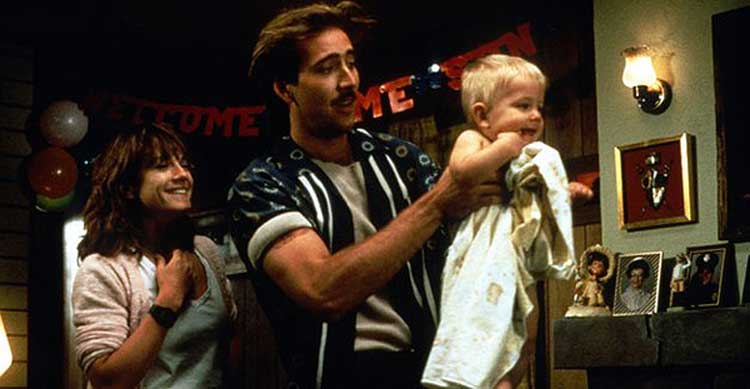 The next film in my That Crazy Nicolas Cage marathon is Raising Arizona, an early film from the Coen Brothers. While this selection is known more for its directors than its star, I hadn’t seen it before, which is pretty embarrassing.

H.I. McDunnough (Cage) loves robbing convenience stores, but he’s not very talented, so he does a series of tours in prison. When arriving each time, H.I. meets Edwina (Hunter), a cop handling the fingerprints. Their connection inspires him to go straight, and they get married and plan to start a family. Sadly, they’re not able to have kids, so the couple decides to steal a baby from the quintuplets of local businessman Nathan Arizona (Wilson). That choice leads to all types of mayhem, which gets worse when H.I.’s old buddies Gale (Goodman) and Evelle (Forsythe) escape from jail and shack up at his house. All signs point to disaster for the McDonnoughs and their newly stolen son, Nathan Jr.

Crazy. Well, at least his hair is crazy. Although H.I. is a lovable doofus, Cage mostly plays him straight, at least within the movie’s comic structure. This was a fairly early role for the actor, and he’d yet to develop some of the overacting tendencies that created issues in some later films. In this case, Cage finds a way to make H.I. dumb and likable, even when he makes poor choices. The writing from the Coen brothers offers the perfect framework for a strong and funny performance.

Cage does a good job, but he rarely chews scenery. Compared to the louder acting by Goodman and Forsythe, he’s actually fairly sedate. The other guys create such raucous criminals that Cage can sit back and watch them chew the scenery. Hunter is perfect in the role of Edwina, which was written specifically for her nuanced talents. The chemistry with Cage is strong, and they’re believable as the unlikely couple. I also have to mention the great Randall “Tex” Cobb (picture above), whose hulking presence as the evil biker scares everyone in sight.

Although the comedy is broader than much of the Coens’ work, it still maintains their dark sense of humor and signature style. Raising Arizona was one of their early features, and the brothers' original talent is obvious right away. The bank robbery offers a perfect example of the Coens’ humor, with the innocent bystanders questioning the conflicting orders from Gale and Evelle. It pushes an already odd scene into hilarious territory with just a few great lines.

There are too many classic scenes in this movie to mention them all, so I’ll just list a few that stick with me. One is the ridiculous chase sequence involving the H.I., the cops, a crazed convenience store clerk, and a large pack of dogs. The silly pursuit goes through a random suburban home and a supermarket and becomes more outlandish as it goes along. The ever-growing band of dogs makes little sense but adds the right level of silliness to the entire thing. Another memorable sequence is the visit from their friends Glen (Sam McMurray) and Dot (Frances McDormand) with their five rambunctious kids. This very odd couple and their out-of-control kids, who write “fart” on the wall and attack everything in sight, make H.I. question if having a child is such a great idea.

This is no surprise, but I’ll join the chorus and say that Raising Arizona is a great movie. It has an effective mix of broad physical comedy, winning performances, and clever touches from the Coens. It lacks the emotional punch of their best movies, but it offers a very enjoyable 95 minutes.