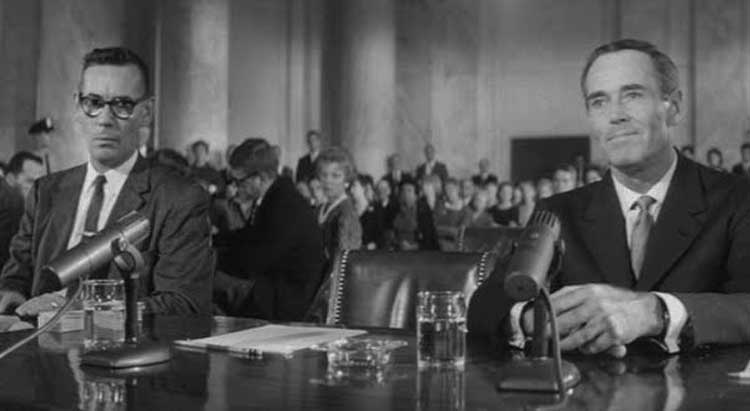 This week, the final choice in the Politics on Film marathon cranks up the red scare for Otto Preminger’s star-studded Advise and Consent. It’s actually my first experience seeing one of Preminger’s films.

The U.S. President’s (Franchot Tone) health is failing, so he decides to nominate a Secretary of State that almost no one will like, the controversial Robert Leffingwell (Henry Fonda). The loyal Senate Majority Leader Robert Munson (Walter Pidgeon) rallies the party to support this move, but it’s not an easy task. South Carolina’s Senator Seabright Cooley (Charles Laughton) has a personal grudge against Leffingwell being confirmed and digs into his past. Possible Communist leanings are not acceptable in the climate of the early’60s. Meanwhile, Senator Brig Anderson (Don Murray) tries to fairly stick to the middle but may be destroyed by his own past demons. A wide array of political forces merges in the end and brings extra relevance to the ultimate vote.

The story’s first hour does an excellent job setting up all the key players and building a convincing political environment. It's generally just guys talking, but Preminger and Writer Wendell Mayes bring relevance to even the most basic conversation. The large group of veteran actors sells the material completely, which is the main reason the scenes work. The best is Walter Pidgeon, who brings credibility and intelligence to a central character. Munson earns respect from all sides, and he even makes a key deal with a rival near the end. This script is adapted from former reporter Allen Drury’s Pulitzer Prize-winning novel, and the scenes don’t feel simplified for movie audiences. Unfortunately, the conclusion falls short and includes too many unlikely coincidences, but it fails to derail the entire picture.

The anti-Communist propaganda of the Red Scare hangs over the entire plot, and several of Advise and Consent’s actors did face the House Un-American Activities Committee in the ‘50s. That paranoia doesn’t relate directly to our current world, but the culture of fear remains, especially coming from hawkish Republicans. If a lone wolf like Leffingwell was nominated today, the rhetoric opposing this move would likely be stronger than Cooley’s. Another hot-button issue covered during the final act is a senator trying to hide his past homosexual activities. Although this film came out more than 50 years ago, the homophobia that he fears is still present today. I was surprised to see this topic covered in a 1962 movie, but its handling is hardly a positive depiction.

There are several big speeches during the subcommittee hearings, mostly coming from Cooley and Leffingwell. In his final role, Laughton plays the smooth Southern gentleman perfectly and deftly avoids becoming a caricature. Although I disagree with his overly patriotic sentiments about war, Cooley makes a persuasive case. Leffingwell’s responses are extremely subdued, but they are no less effective. Fonda effectively plays the self-described “egghead” as an intellectual counterpoint to the blustery senators. We also see impassioned speeches from the fiery hothead Senator Von Ackerman (George Grizzard), but his pleas fall mostly on deaf ears from the older veterans. Keep an eye out for Betty White and Rocky’s Burgess Meredith in small roles.

There’s nothing easy in Advise and Consent, which raises questions about the best approach to our political process. The quality drops off in the second hour, but it remains a smart, well-written film.