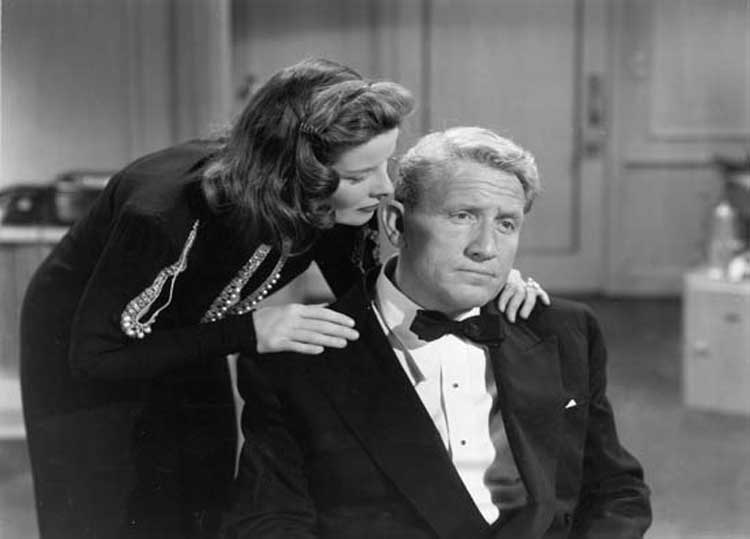 Similar to Mr. Smith Goes to Washington, the story combines cynicism about politics with an idealistic, sometimes corny perspective. Corrupt Washington insiders are again trying to pull the strings of a principled guy new to the game. This time, the ultimate prize is the highest office in the land.

Spencer Tracy stars as Grant Matthews, a self-made businessman who owns a thriving aviation company. His marriage to his wife Mary (Katherine Hepburn) is on the rocks due to his affair with newspaper owner Kay Thorndyke (Angela Lansbury). The story actually begins with Thorndyke witnessing the death of her father and vowing revenge on the Republican establishment. With Grant as her tool, she’ll take over the presidency and run the show from the back room (or the bedroom).

He decides to run with thoughts of telling it like it is and siding with the people, not politicians. This approach is a common genre trend in political films, with Robert Redford’s naïve guy in The Candidate having the same feelings. Encouraged by Mary to speak his mind, Grant seems set on being real but eventually falls prey to Thorndyke and political expert Jim Conover (Adolphe Menjou). He appears to have a shot at the nomination, but it may cost him both his soul and a once-promising marriage.

State of the Union begins with a series of scenes of characters talking about people who aren’t there. Thorndyke and Conover talk about Grant, then he arrives and they all talk about his wife. Mary enters the picture and then she sits with Conover and chats about Grant. The dialogue is snappy and includes some clever barbs, but the static moments do take their toll. Without the strong personas of Tracy, Lansbury, and especially Hepburn, the material would become tiresome. They keep the story interesting, and Grant’s moral downturn has a convincing effect. Even though I expected he would come to his senses, the possibility of his ethical destruction remains for a while and keeps the tension high.

Hepburn is sharp and contrasts well with Lansbury’s cold newspaper baron. Looking at this film and her even scarier performance in The Manchurian Candidate, it’s remarkable to see how nasty Lansbury could act in the right role. I grew up seeing her in Murder She Wrote in the 1980s, so these young performances are a revelation. She was only 23 at the time of this release and exudes much greater maturity here. Musical star Van Johnson brings energy to journalist Spike McManus who feels like he’s in another movie. Adolphe Menjou also deserves credit for never overplaying the nastiness of Conover’s political ambitions.

Although this film mostly occurs indoors, it includes an inexplicably long aerial sequence that shows Capra trying to inject life into the story. Grant is traveling by plane towards a campaign speech and happens to come alongside his test pilot buddy. Following an increasingly dangerous macho bet, the guys try all manner of aerial stunts to have fun. After crazy loops and dips, they eventually end the contest by jumping out of each plane and parachuting to an airfield. While all this is happening, Mary is casually knitting and Spike is freaking out and nearly puking. Along with providing some fun, this sequence also sets up a moment with the test pilot where Grant’s not so care-free. It seems like quite an elaborate sequence to make an obvious point, but Capra rarely underplays when pushing the message.

State of the Union would be considered “minor Capra” and is going to alienate some viewers with its very long, passionate speeches. Grant delivers several very long discourses about the issues of the day and saves one last over-the-top moment for a final radio address at his house. It’s interesting to note the focus on Republicans, which makes sense with the Democrat Truman as the president at the time. I’m not familiar enough with the politics of the late ‘40s to know which party was the more liberal group. Grant does talk about helping the poor, supporting our unions, and rejecting corporations, so his views probably wouldn’t match with today’s conservatives. Of course, he’s also crazily patriotic, believing Americans should push our way of life to the whole world.

Considering the anti-Communist sentiments of the time, this jingoistic pride seems more understandable. As an overall theme, Capra sides with the common man over the establishment in nearly all cases. Screenwriters Anthony Veiller and Myles Connolly give all the stars many speeches to clearly outline the issues at hand. The end result is a relaxed story that lacks punch but delivers an engaging two hours from its capable stars.