Top 5 Reasons that The Room is Ridiculous (and Awesome) 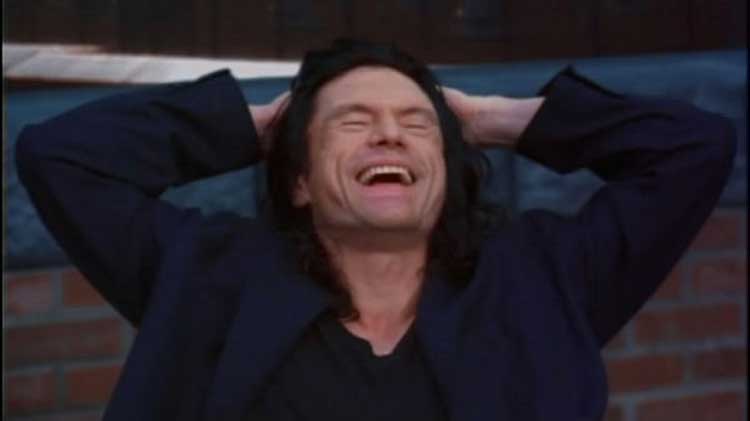 One of the leaders of the “so bad it’s good” category, The Room has earned a grand reputation as one of the worst movies ever created, but that label fails to truly capture its unbelievable craziness. The hulking Tommy Wiseau serves as the writer/director/star of this San Francisco drama, which delves into back-stabbing, relationship problems, and guys playing football in tuxedos.

Wiseau plays Johnny, a nice guy who appears to have a great life with his young girlfriend Lisa (Juliette Danielle). He seems dim-witted and dull, but he buys her lots of red roses, so of course he’s a good guy. Lisa spends all her time in their apartment waiting for someone to arrive, so it’s not like they’re living a high-flying life. When she hooks up with his best friend Mark (Greg Sestero), all hell is ready to break loose.

The Room is easily one of the most ridiculous movies I’ve ever seen, so it would take several long books the size of War and Peace to cover all the chaos. So I’ve narrowed it down  to five reasons that you should see (or run away from) this cult film:

1. The actors play it straight.
Although the material is terrible, the cast appears to believe they’re performing in a dramatic Tennessee Williams play. Even when Wiseau imitates a chicken several different times, he seems confident it’s not a ridiculous move. He also goofily mumbles his stilted language with an odd Eastern European accent that varies dramatically and is frequently dubbed. Delivering wonderful lines like “Thank you honey, this is a beautiful party! You invited all my friends. Good thinking!” is made even better by Wiseau’s unique delivery. Also, Danielle is trying so hard to make Lisa a femme fatale that she fails to realize the character isn’t alluring at all. Another great example is Carolyn Minnott’s overbearing mother, who gives an extended monologue outlining a laundry list of tragic events. The dialogue is pure hokum, but Minnott never winks at us or shows that she’s aware that it’s nonsense.

2. Important scenes occur and are never referenced again.
Another confusing element is the character of Denny (Philip Haldiman), a teenager who lives in their building. Out of nowhere, a gun-wielding thug attacks Denny asking for his money and nearly kills him. We learn that the kid has a past of drug addiction, which seems headed towards some type of resolution. It never arises again. Even better is Lisa’s mother, who throws in a line about being diagnosed with breast cancer, then never mentions it again. These instances might be enough, but it gets even better. The guys are all wearing tuxes and proceed to go outside and throw a football around while standing only a few feet apart. A second later, they’re in different outfits, and the story keeps moving. Brilliant!

3. Wiseau steals directly from classic films.
Although The Room is a terrible film, it is clear Wiseau believed he was creating a tragic masterpiece. The promotion might call it a black comedy, but that’s revisionist history based on the audience reaction. There are two blatant examples of Wiseau “borrowing” from other movies. The obvious one is Rebel without a Cause and its memorable “you’re tearing me apart” scene. Wiseau steals the line directly and uses it when Johnny is frustrated with Lisa. Obviously, he doesn’t match James Dean’s intense delivery. The other instance is near the conclusion, where Johnny goes through a Citizen Kane-like destruction of his room. Let’s just say his approach differs a bit from Welles’ performance.

4. Many plot situations are strangely removed from reality.
One of the main reasons for the ongoing popularity is the series of head-scratching moments that make little sense. In my favorite moment, Johnny is determined to find out if Lisa is cheating on him, so he connects the phone to a tape recorder. This might seem clever, but he leaves the record button pressed at all times and appears to be using old-style cassette tapes. Unless the call happens in 90 or 120 minutes, he’ll be screwed. However, the tape player ends up playing a key role a few days later. This is just one of many examples that lead to hilarious, yet confusing reactions from viewers.

5. The love scenes are totally ridiculous.
The Room’s first half includes several lengthy romantic interludes that might be the least sexy scenes ever put on film. They’re shot from strange angles, and Wiseau even reuses the same footage in multiple sequences. Slow, groovy tunes blare during each scene, and they drag on for an unbelievably long time. They feel more like a parody than anything even remotely engaging.

I enjoyed Troll 2 less than I expected because the best scenes were spoiled by watching Best Worst Movie. The Room was a much purer viewing experience. I knew little about Wiseau’s blundering masterwork beforehand, which led to many hilarious moments. If you’re in the mood to watch a bad, yet entertaining movie, you can’t make a much better choice than this remarkable clunker.