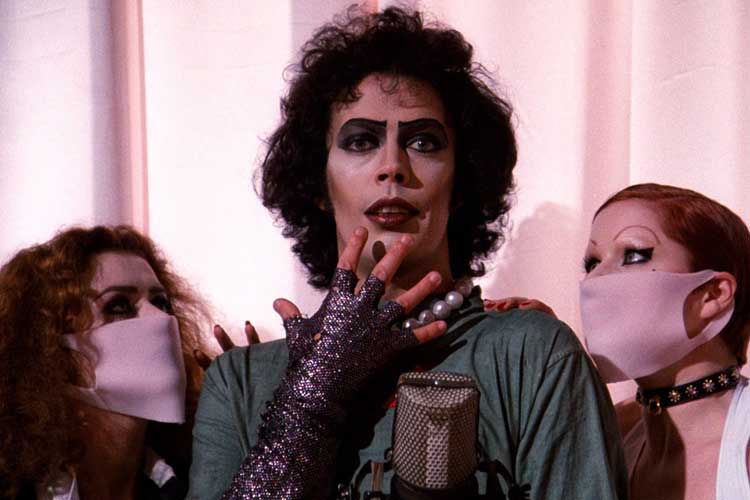 My final choice in this marathon is one of the most successful cult films of all time, The Rocky Horror Picture Show. I’ve resisted the hype for a long time and didn’t have much interest in seeing this popular musical. It’s difficult to take the “Time Warp” seriously when you’ve seen it performed by the corporate band at Employee Appreciation Day. This marathon offered me the chance to try and overcome my preconceived notions.

The newly engaged and very square couple Janet Weiss (Susan Sarandon) and Brad Majors (Barry Bostwick) are forced to stop at a strange mansion when their car gets a flat tire. Arriving just to use the phone, they discover a crazy party led by the transvestite Dr. Frank-N-Furter (Tim Curry). During a single night, the duo’s lives are forever changed by experiencing spontaneous musical numbers, sex, aliens, and the creation of life itself. It’s not always clear what’s happening, but their dull lives will never be the same.

Rocky Horror is known for inspiring fanatics to dress up and attend special midnight screenings. Considered apart from the overblown hype, it’s actually a unique movie that brings a lot of energy to the big screen. The style is definitely early ‘70s, but it works as a cult film because it doesn’t feel manufactured to generate fans. In his first movie role, Curry makes Dr. Frank-N-Furter strangely believable in the signature role, and the supporting players bring the right level of clever nuttiness to their parts. It's not a groundbreaking effort, but there are fun moments that explain the attraction of devoted fans. I don't plan to attend a midnight screening anytime soon, bu I did enjoy the experience.

Like the other cult films, it’s not easy to place Rocky Horror within a single genre. It’s a musical, but sci-fi and horror elements also play a role within the thin story. It’s also a sex comedy, with the innocent young couple rejecting their former constraints inside the abnormal environment. The scenes are familiar, but are presented in a skewed manner.

The Rocky Horror character arrives like the Frankenstein Monster, but he looks like a blond European bodybuilder, not Boris Karloff. The alien storyline makes little sense and just adds to the goofiness that drives the whole thing. Jim Sharman and Richard O’Brien borrow from plenty of earlier productions, but the combination generally works against all odds.

This film was adapted from the original play, but Sharman uses quick camera movements and awkward angles to enhance the story’s otherworldly feeling. Retaining Curry, Patricia Campbell, and Nell Campbell from the play’s cast, he keeps an authentic feel that would have been lost with bigger stars. That choice keeps the focus on the songs, set design, and atmosphere instead of any distracting shenanigans.

With the exception of Barry Bostwick’s white underwear briefs (which are frightening), the rest of the movie retains a light-hearted tone. Even the possibly nasty moments lack true menace and aren’t likely to induce nightmares. The ultimate result is a fairly enjoyable, yet mostly forgettable musical that contains some fun sequences within a messy structure.