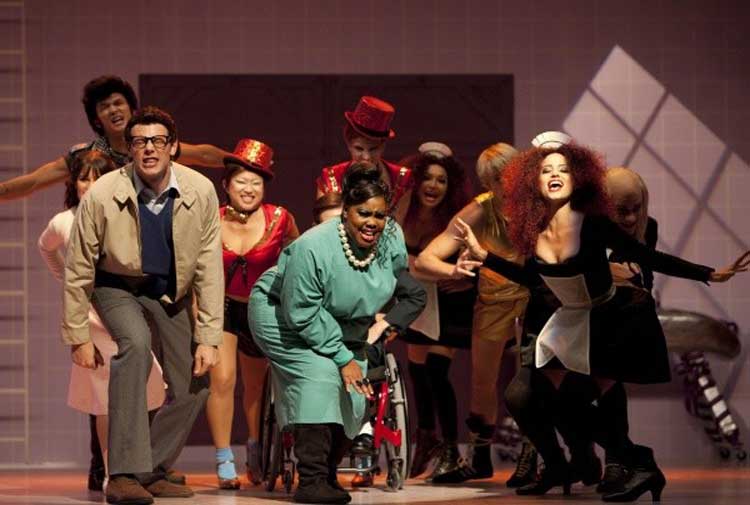 Premiering in the fall of 2009, Glee has gradually built a major following with its energetic infusion of the musical into the high school comedy genre. The talented cast belt out a mix of the latest hits and classic songs while dealing with the difficulties of daily life at school. It’s a tricky combination that has created an extremely uneven collection of episodes during the first two seasons. The songs are selling like crazy and earning serious money for the Fox network, but the story quality varies dramatically each week. It’s almost never dull, especially during the rousing musical numbers. However, the inconsistent plot lines can send even the most likable characters into shaky territory.

Some of Glee’s most popular episodes have focused on a single artist, with the cast tackling Madonna or Britney Spears’ catalogs throughout one story. Given the success of those attempts, it seemed only a matter of time before they performed one of the most infamous musicals, The Rocky Horror Picture Show. The episode’s premise has Will (Matthew Morrison) pushing the class to reenact this musical when he discovers that Emma (Jayma Mays) likes the film. Even though she’s dating Carl (John Stamos), Will still has feelings for her. This seems like a terrible idea, especially considering the risqué material in Rocky Horror that’s not really suited for a high school production.

The numbers that stick with me from the 1975 film are the “Time Warp” (obviously) and “Hot Patootie-Bless My Soul”, performed memorably by Meatloaf in the original movie. Both of these are prominent here, with the entire group closing the episode with the quintessential tune. John Stamos takes on Meatloaf’s energetic tune in the classroom, and that’s the highlight of this up-and-down episode. Creator/writer Ryan Murphy has a lot of fun injecting all types of Rocky Horror references into the script beyond the music. Meatloaf and Barry Bostwick (one of the film’s stars) also make a cameo as shady men in black suits. They involve Sue Sylvester (Jane Lynch) in a sting operation that could jeopardize the future of the class, but Will’s eyes are too focused on Emma. He even lures her into performing the racy “Touch-a Touch-a Touch-a Touch Me” with him, which inches very close to crossing the lines of proper behavior.

The Glee kids are rightfully confused and worried about performing Rocky Horror, especially those like Finn (Cory Monteith) who are forced to wear unflattering outfits. These moments are stilted and feel like filler to get us to the next big number. The show has this problem sometimes and can’t always find ways to make the plot match the excitement of the tunes. The young actors give it their best shot but can only do so much with the awkward material. However, I do enjoy seeing them take the chance.

It’s also not easy to try and recreate the original Rocky Horror’s atmosphere, especially in a school auditorium. Murphy does introduce a few twists, particularly having Mercedes (Amber Riley) take on Tim Curry’s Frank-N-Furter role. I stopped watching Glee regularly earlier this season, but I can recognize the reasons for its popularity. This episode offers an interesting take on a cult classic, despite any story limitations.
TV Review