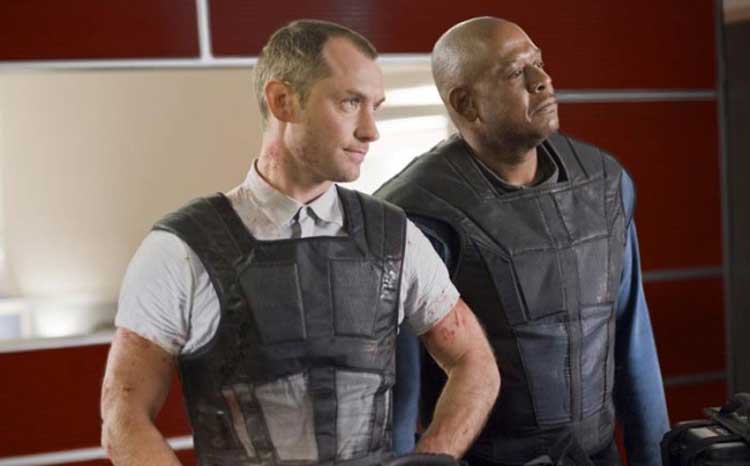 Although it has no connection to Alex Cox’s Repo Man, it’s nearly impossible to read the title Repo Men and not think of the far superior 1984 movie. In the most basic sense, both stories follow troubled loners who repossess products for a shady dealership. That’s where the similarities end, completely. The 2010 film follows brutal guys who slice open the bodies of unfortunate souls and repossess their expensive artificial organs. Taking place in the near future, this debut feature from Miguel Sapochnik takes a bleak, lifeless look at former soldiers who seem to enjoy their bloody jobs way too much.

Based on the novel Repossession Mambo by Eric Garcia, Repo Men depicts the plight of Remy (Jude Law), who promises his wife he’ll get out of the business but just can’t help himself. When his buddy Jake (Forrest Whitaker) asks him to help out with killing and cutting up some poor citizens, how can he say no? He’s hoping to escape and switch to selling the artificial organs, but he seems to lack the suave nastiness of his boss Frank (Liev Schreiber). I’ve worked with people in the corporate world who have the rare talent to charm you while they’re actually screwing you over, and Frank definitely embodies this type of evil. Remy is a grunt who takes orders, distributes the violence, and goes home. But his wife Carol (Carice van Houten) is ready to bolt with their son, so it’s not such an easy decision.

There’s probably an interesting story lurking somewhere inside this tale of loners doing a nasty job and loving it. Instead, Sapochnik subjects us to dreary scenes of Remy attacking helpless individuals. There’s some voiceover narration to try and make us identify with his plight, but it feels forced and doesn’t add the necessary edge. Garcia also wrote the screenplay with Garrett Lerner, and they try to make us identify with Remy’s situation. We spend most of the film in his shoes, and even a near-tragedy can’t make him interesting. When he joins up with Beth (Alice Braga) and is forced to turn the table on his employers, the result is just a chaotic mess of blood and random fight scenes.

The final act sends Beth and Remy into a secure facility, where they battle with office drones using all manner of weapons, including a hacksaw. The early scenes were just the warm-up for these battles, which go over the top but never come close to Oldboy-style mayhem. Eventually, there is a twist that explains the mess, but it only plugs a small leak in a flood of problems. I didn’t expect the twist and appreciate the effort, but it still raises questions about the point of the entire picture. Bloody, messy havoc can’t save this utterly forgettable story, which should remain on the scrap heap like a repossessed organ.