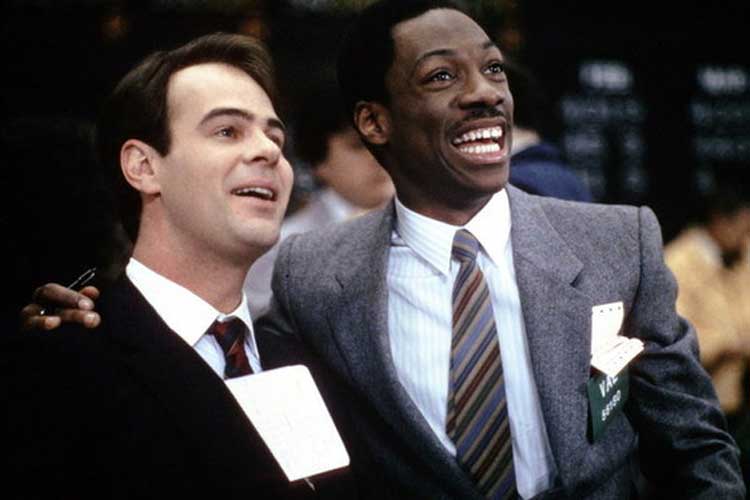 My third choice for the 1980s Comedies marathon is Trading Places, which was Eddie Murphy’s second movie role. John Landis (Animal House) directs this satiric look at the corporate world and the mean and powerful guys who run the show.

Louis Winthorpe III (Dan Akroyd) is rolling as the star employee for the Duke brothers (Ralph Bellamy and Don Ameche), veteran commodity brokers with loads of money to throw around at their leisure. He’s extremely arrogant, engaged to be married, and living a luxurious life. Billy Ray Valentine (Eddie Murphy) is doing small-time scams on the street to earn a few bucks. To stay amused and settle a bet, the Dukes decide to take everything from Winthrope and give Valentine his job. They may end up regretting this cruel game.

The film's look fits with the big cities of the 1980s, but the biting vision of human nature (and corporate leaders) holds true now. It’s more poignant given the rampant fraud from hedge fund managers and CEOs during the recent economic mess. Watching Winthorpe and Valentine stick it to the Duke brothers is satisfying regardless of the time period.

The crazy finale on the trading floor embodies the ‘80s and that decade’s focus on the rise of greed. And of course there’s Eddie Murphy, who became a megastar with a series of hit comedies starting with 48 Hrs. a year earlier. The classic scene of Valentine staring down a huge collection of guns in the private club shows up in clip reels all the time.

Trading Places is a showcase for Murphy, who turns Dan Akroyd and Jamie Lee Curtis into also-rans each time he appears. Curtis seems miscast as a kind prostitute (especially during a few odd nude scenes), but she pulls it off fairly well. Denholm Elliot (Marcus from the Indiana Jones movies) brings glee as the doting butler who secretly hates his employers. Keep an eye out for Bo Diddly, Jim Belushi, and Frank Oz in cameo roles.

I had put off seeing this movie because I expected a typical switcheroo comedy. Instead, Trading Places is both funny and clever and was worth the time. It’s not groundbreaking but provides two hours of solid entertainment. If someone can clearly explain to me what happens during the trading floor scenes, I might even give higher marks.

Sixteen Candles
The 'Burbs
After Hours