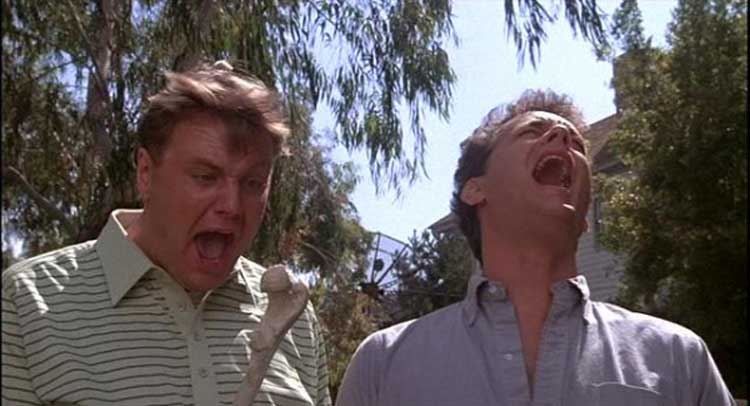 For the second entry in my 1980s Comedies marathon, I’ve chosen the oddball Tom Hanks comedy The ‘Burbs. Although it lacks the reputation of Sixteen Candles, this 1989 movie has developed a pretty strong following because of its offbeat humor.

Ray Peterson (Hanks) is taking a much-needed “staycation” at home from his stressful job and plans to wear a bathrobe and do very little. Much to his wife’s (Carey Fisher) exasperation, he becomes obsessed with the strange house down the street and its mysterious inhabitants, the Klopeks. Joining a few slightly nutty neighbors, Peterson gets involved in all types of comic mayhem during his disastrous investigation.

Any movie that satirizes the suburbs will still carry weight today, but the over-the-top comic style feels really dated. There’s little wit to the lead performances, which are manic attempts to depict the crazed inhabitants of the clean neighborhoods. Wondering about mysterious neighbors is a universal activity, but making the house and its characters so extreme dulls the fun of watching everything go to hell. By the time Ray finally reaches the Klopeks’ inexplicable basement, I was just ready to get out of there.

In terms of top moments, I have just two words: Corey Feldman. After The Lost Boys and License to Drive, he was on a roll at this point. We also see the type of old-school Tom Hanks comedy performance that started to disappear as his star rose in the ‘90s. In general, this movie just has a goofball tone that fits the ‘80s a lot more than the overly planned comedies of today.

The two memorable performances go to Rick Ducommun and Bruce Dern playing the nosy neighbors. Ducommun gets the thankless role of the guy who consistently pushes Hanks to investigate the Klopeks. He’s not an endearing character, to say the least. As war veteran Lieutenant Mark Rumsfeld, Dern has fun giving one of his typically agitated portrayals. Nashville’s Henry Gibson shows up briefly to play the creepy Dr. Werner Klopek.

I know this is sacrilege to some, but I didn't find The ‘Burbs that funny. The zaniness gave me a few chuckles, but most of it is just tiring, especially by the time we reach the explosive finale. Even though most of the characters are ridiculous, it’s forgettable and not something I’d watch again. This neighborhood and its denizens should have stayed a mystery.