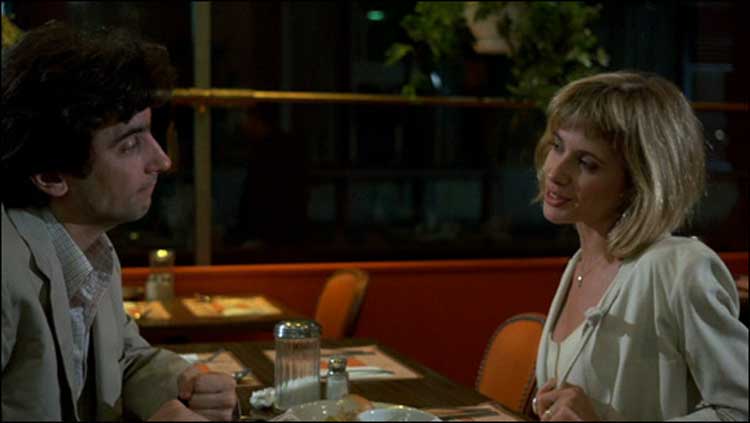 My final selection in this marathon is Martin Scorsese's urban nightmare After Hours. Unlike the others, it stretches the limits of the term “comedy” and drifts into horror film territory. Paul Hackett (Griffin Dunne) seems like a standard office dude with a fairly dull life outside of work. A chance meeting with Marcy (Rosanna Arquette) at a coffee shop sends him downtown for a possible hook-up. Instead, Paul gets thrown into a crazy night with artists, punk rockers, and just plain weird folks who put him through serious hell. Broke and being chased by a violent mob, he scrambles to survive this nightmarish time after hours.

Everything about New York City here screams the mid-‘80s, but the sense of impending doom remains sharp today. Watching After Hours is equivalent to riding a roller coaster through the dark like Space Mountain. It can be thrilling and fun while creating dread for what lurks around the next turn. Paul might not be a great guy and is a bit dense, but few people deserve the trials he faces during just a few hours.

The best example is the nightclub scene, where Paul finally persuades a bouncer to let him into a private party, which ends up being a “Mohawk party.” He narrowly avoids being “mohawked” and appears to lose a bunch of hair, but we don’t see a change in his mane afterwards. This movie also presents the ‘80s image of the city as a scary place of shady characters and crazy people. This paranoid idea hasn’t disappeared from common perception, but it doesn’t have the same hold as during that decade.

There are so many oddball small roles in this film that I can’t describe them all. Highlights are Teri Garr as a disenchanted waitress with a giant beehive hairdo, John Heard as a late-night bartender, and Catherine O’Hara as a manic ice-cream truck driver. Cheech and Chong also appear as burglars who arrive at the most inopportune times for Paul. Keep your eyes peeled for early roles from Linda Fiorentino, Will Patton, and Bronson Pinchot.

After Hours knocks out one more film in the Scorsese canon and just leaves The King of Comedy and a few early pictures. I enjoyed the manic pace and nightmarish landscape, but I don't plan to revisit it in the near future.