Hidden Figures and the Joy of Movies 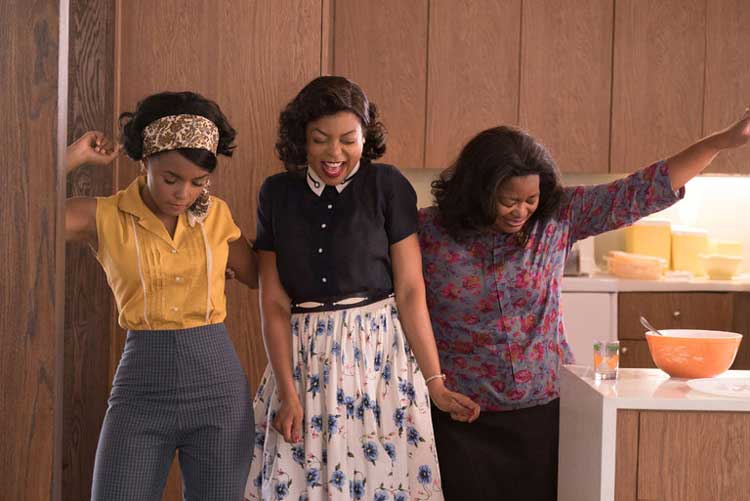 It’s a scary time with horrible news lurking around every corner. Here in the U.S, the Trump administration is revealing terrible plans on a daily basis. There are many ways to combat these policies, including protests, calls to senators and representatives, and personal interactions. Where does art fall into the mix? It’s easy to dismiss movies as less essential during serious times like our current era. That is true in a certain way; there’s a lot more to do than just watch films. On the other hand, even prominent commercial releases can play an important role. They bring us together and can spotlight voices that are pushed to the background too often.

A perfect example is Hidden Figures, which arrived in theaters as just the right time earlier this month. The crowd-pleasing film tells a story that few of us know about the early days of the space program. It also provides three standout roles for African-American women that are far too rare. This isn’t a case where a white guy dominates the story and becomes the central figure. Instead, it’s the incredible work from Taraji P. Henson, Janelle Monae, and Octavia Spencer that takes center stage. All three give award-worthy performances as strong, intelligent women that worked behind the scenes at NASA during the Mercury program.

Cynics might dismiss this film as a conventional story that just makes audiences feel better about themselves, but that isn’t a fair assessment. Instead, it clicks because we’re on board with the characters from the start. It’s fun to just hang out with this trio even when they aren’t solving problems at NASA. That’s no easy feat. Katherine G. Johnson (Henson), Mary Jackson (Monae), and Dorothy Vaughn (Spencer) aren’t just symbols of overcoming an oppressive system. They come alive on the screen as fully fledged characters with real hopes and dreams. It’s a joy to spend two hours with them and see their ultimate success.

Jackson’s big speech before a Virginia judge (Frank Hoyt Taylor) is a good example. The only way she can enter NASA’s engineer program is to take certain night classes, but they’re only at an all-white school. Jackson’s speech is pure Hollywood, but it still works because Monae injects such feeling into it. The way that she sells the judge on being “first” is brilliant and makes the scene crackle. Director Theodore Melfi brings the camera in close to focus just on the faces of Monae and Taylor; he makes it a personal moment between two people. Monae owns this scene and reveals (along with Moonlight) her impending stardom.

This human connection is at the heart of why Hidden Figures shines for such a wide audience. The crowd in my theater included kids, adults, and grandparents from diverse backgrounds, and there was huge applause at the end. I could tell it was connecting with most of us, including my seven-year-old daughter. The best Hollywood filmmaking feels effortless, and that airy feeling is all over this movie. Henson is the centerpiece as Johnson, and she endures a lot from the condescending white guys in her Space Task Group. It never feels like too much cruelty, however. The script from Melfi and Allison Schroeder strikes the right balance in showing the hardships while still delivering an inspiring story.

Henson delivers what is easily one of my favorite performances of 2016. Johnson is brilliant and knows she’s smarter than her co-workers yet follows the rules of that environment. Her gruff boss Al Harrison (Kevin Costner) understands her value but will only do so much. He fails to recognize her daily strife of running across campus to the bathroom until she breaks down. Costner’s hero moment in tearing down the sign doesn’t feel earned for him, but it draws a fist pump because it’s a victory for Johnson. Henson charms us from the start, and we’re definitely on her side. When a possible romance starts with Colonel Jim Johnson (Mahershala Ali), we won’t accept him until she does.

It's convincing to see the institutional racism that each woman faces every day. The rules are written to keep Jackson from becoming an engineer, and people treat it like a fact of life. Johnson must drink from a separate coffee pot, use a different bathroom, and dodge other hurdles. The sexism from her all-male co-workers on Harrison's team is accepted as normal. Some of them mean well, but that accomplishes little under a rigged system. There's no margin for error for Johnson in this group.

Spencer earned an Oscar nomination last week for Best Supporting Actress, and she deserves the acclaim. She wonderfully underplays Vaughn’s intelligence and understanding of the office landscape. Vaughn recognizes the dangers of the IBM computers to their roles but sees the opportunities in mastering it. Her changing interactions with the stuffy Vivian Mitchell (Kirsten Dunst) reveal her growing power. By using her mind and understanding the technology, Vaughn subverts a system designed to keep her down. Her heroic scene in leading the women of the West Campus to their new jobs is thrilling and quite a change from the cold NASA hallways.

I did not expect Hidden Figures to receive a Best Picture nomination because it’s such a crowd pleaser. There’s joy emanating from the screen, and the audience keys on that excitement. Certain beats are predictable, but that doesn’t mean they fail. Even relaxing moments like watching the three stars dance remain engaging. Each lead gets her chance to shine. With a modest $25 million budget, it’s also the type of film that’s become less common from the big studios. In looking for the big payday, they often miss the importance of telling new stories that connect with a general audience. See this film, and make sure you take your daughters with you.