Anyone that presents their art on the public stage has a bit of insanity in them. It takes more than talent to risk audience rejection and not lose confidence. Plenty of well-known artists have struggled with mental illness. Robin Williams is a recent example of a guy who received the adulation, but it did little to save him. In the music world, performers have no leeway on the thankless stage. Chan Marshall (aka Cat Power) has a rare voice and talent, but I’ve seen firsthand what happens when a concert goes astray. In a certain way, it’s the same insecurities that deliver her best music. It’s all part of the package, and daily tensions drive the art to new heights. Would Kurt Cobain have delivered songs that we still explore today if he was a happy guy with few doubts? While there’s no clear blueprint for art, it’s hard to deny the connection between tormented geniuses and original music.

Questions of mental illness hang over Frank, which depicts an eccentric guy (Michael Fassbender) who performs with a paper-mâché mask over his head. In fact, he wears the mask all the time. Is this a piece of performance art or simply part of his being? Inspired by Frank Sidebottom — the comic alter ego of Chris Sievey — Frank never reveals anything funny about this choice. He goes to diners, performs at clubs, and just lives his life wearing the mask. The script is co-written by Jon Ronson, who played keyboard with Sidebottom’s band in the late ‘80s. We observe the story through the eyes of Jon (Domhnall Gleeson), a young keyboardist whose experiences have some connections to Ronson’s real-life history. This mix of reality and fiction brings a strange charm to this film.

We begin with Jon strolling down the streets and looking for songwriting inspirations. It quickly becomes clear that his ideas are limited in this area. When the best subject he can find is a lady’s bag, we aren’t in superstar territory. Despite having few followers for his blog and Twitter account, Jon keeps looking for an opening. I can definitely sympathize with this experience. When you’re just starting a project, any glimpse of interest is a thrilling feeling. Through pure happenstance, Jon meets Don (Scott McNairy) and gets a shot to play keyboards for the Soronprfbs. The gig is one of those unseen indie rock shows where a few curious bystanders passively observe the mess. It only lasts for a few minutes, but there’s a glimpse at something brilliant within the chaos. 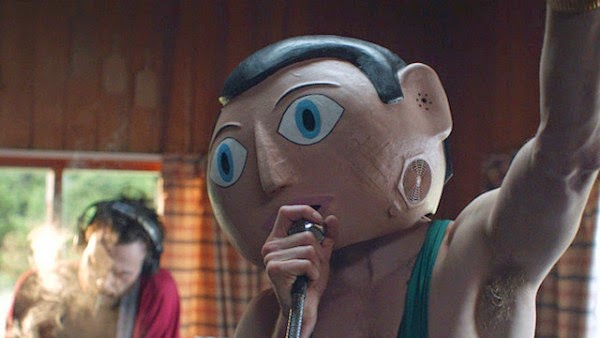 Watching the Soronprfbs try to record an album is something to see. Calling it a “disaster” wouldn’t go far enough. The band lives in remote cabins in Ireland and rehearses for nearly a year before they even record a note. Given some stories of bands spending years on a record, this depiction probably isn’t thar far-fetched. Our entry point is Jon, who tries to become one of them and even grows a scraggly beard. He’s the only person intrigued by the commercial prospects for such an odd group. In the world of viral videos and YouTube sensations, Frank wouldn’t be the strangest thing to build a large following. Of course, what he can actually do with that interest is a different question.

The conflict between commercial and artistic success is common for bands that begin with idealistic concepts about their music. Fans want their favorite artists to get a larger following but don’t always recognize what’s connected to that growth. The Goo Goo Dolls toiled for years in clubs and were an energetic (if fairly simple) live act. When they finally made it big, they morphed into something unrecognizable and entirely forgettable. While this fate isn’t likely for Frank, he can’t help but get excited when Jon nabs the Soronprfbs a slot at South by Southwest. Playing for people that actually know them at such a grand event sounds amazing. The danger is stretching too far and inviting destruction.

Michael Fassbender is well-known for big-budget productions like the X-Men films and Prometheus. He might seem out of place in Frank, but that isn’t really the case. Looking at Fassbender’s career, he’s thrived in unconventional parts in films like Shame and Hunger. Frank is different than those guys yet equally challenging. It’s thrilling to watch Fassbender hide behind a mask and continue to stretch his talents. Despite the visual barrier, Frank is a unique character who isn’t a gimmick. When we see his real face in the end, the moment feels earned and delivers a powerful conclusion. It doesn’t really explain the mask yet provides enough to make it understandable. 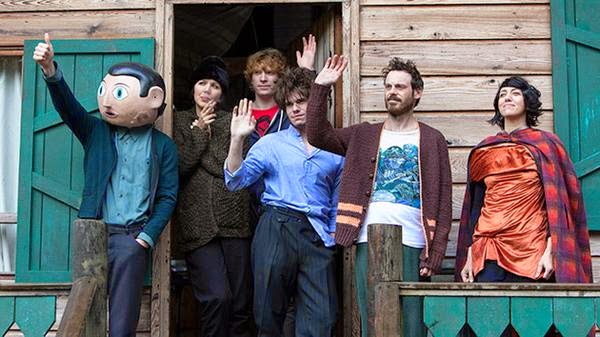 There’s a deft mix of comedy and tragedy within Frank, and it doesn’t always connect. Jon is such a dummy, yet we’re stuck with his perspective. His bandmates are standoffish, particularly Maggie Gyllenhaal’s Clara. They have little interest in commercial success and recognize the danger from Jon that Frank doesn’t see. There’s a risk for the filmmakers to create too much distance or make fun of the band. Neither really happens here, and that’s the reason the movie works. When the challenges arrive in Texas, there’s the risk the story will go off the rails. There are so many ways to go wrong, yet Director Lenny Abrahamson sidesteps nearly all of them. It’s an offbeat tale that won’t offer an easy conclusion, and leaving the characters in their rightful places is no easy feat.

The music is surprisingly brief throughout most of the film. We catch glimpses of rehearsals, or something frequently goes wrong to stop the momentum. The exception is the finale, which reveals the rare power that emanates from Frank’s mind. “I Love You All” is an incredible song that closes the movie on just the right note. Despite the artistic success, the band isn’t heading for stardom. Even so, they’re collaborating on the fly and building remarkable music. Frank’s powerful voice sounds clearer than ever, and we really hear him for the first time. The story closes on just the right note and reveals their strength as a unit, no matter what obstacles arrive down the road.
2014 Film Review