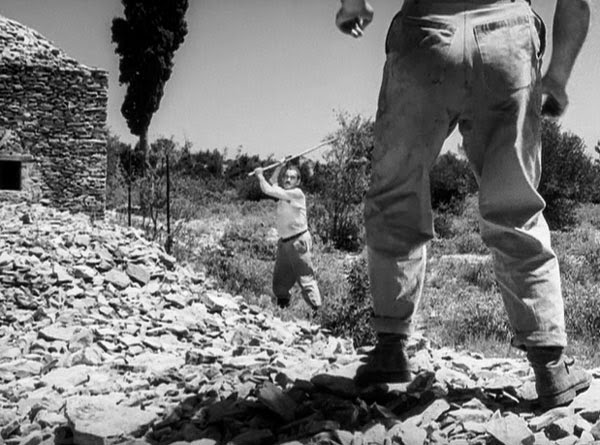 The premise is simple. Two guys must drive a truck 300 miles across rocky territory to an oil field. The catch is their cargo — unprotected barrels of nitroglycerine that could explode with any minor disruption. There are two trucks, and the prize is $2,000 per person at the end. Only desperate men would tackle a job with such a low chance of success. This situation gives Director Henri-Georges Clouzot the perfect set-up to craft an extremely tense thriller. Released in 1953, The Wages of Fear offers a nihilistic look at human nature. The script from Clouzot and Jérome Geronimi reveals the dark side of modern civilization. The American Southern Oil Company (ASOC) is making huge profits in the Mexican town of Las Piedras, but their gains come with a steep price for the locals. The industrial ruin creates a bleak wasteland that provides the backdrop for this perilous journey.

The opening shot is a kid tormenting bugs, and this ugliness pervades the film. A man throws rocks at dogs, and no one looks happy in this hot and uncomfortable setting. The beautiful Linda (Clouzot‘s wife Véra) stands out in this grim environment, but she’s treated like a subhuman. There’s little humanity in this desolate place, and its remote setting makes it difficult to escape. Mario (Yves Montand) connects with Jo (Charles Vanel) over their French background, and they become friends. They’re among the most aggressive volunteers for the dangerous mission for the ASOC. They end up driving one truck, while the jovial Italian Luigi (Folco Lulli) joins the stoic German Bimba (Peter van Eyck) in the other vehicle. The situation is so desperate that they’ll do anything to get away from it.

Clouzot doesn’t rush into the main plot and gives us time to understand the town. It’s a harsh place where only the oil company finds success. The real victims are the locals, who’ve been manipulated by the ASOC and can only watch as their land dies. Las Piedras resembles a post-apocalyptic town that’s been decimated and sits in ruins. An accident kills 13 workers, and the American company men only care about their investments. Transporting the nitroglycerine is so dangerous that they’re forced to say “to hell with the union!” and pursue other options. Nearly an hour of screen time passes before Mario and the others climb aboard the trucks. It feels like a futile gesture to serve inhuman corporate masters. The financial rewards are great if they succeed, but it's basically suicide. 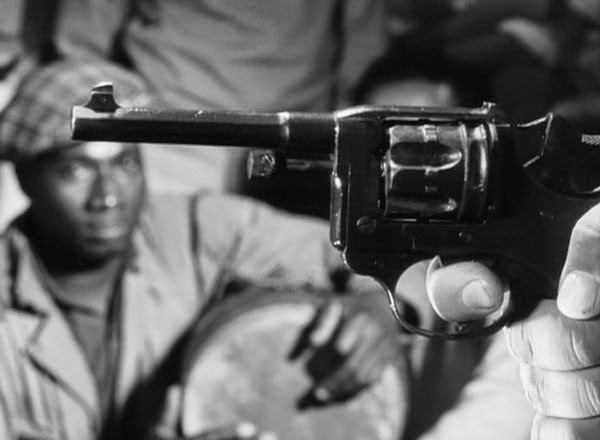 An early conflict at a bar spotlights the problems in Las Piedras. Luigi strolls inside with a big smile on his face and buys drinks for the crowd. This doesn’t sit well with Jo, a former gangster who dislikes everything about the upbeat Italian. The conflict escalates to an ugly showdown that nearly becomes deadly. The close-up shots of their feet and faces bring a horror that something terrible is about to happen. The static shot of the gun holds for a moment, but it feels like an eternity. A question hangs over Jo’s participation. He isn’t picked as a driver but gets the job when another guy doesn’t appear. Did Jo kill him? He seems desperate enough to do anything given the harsh conditions. Jo gives a strong impression, but hints arrive during their trip that it’s really just a brusque façade.

Once the journey begins, the slow pace lifts the tension to nearly unbearable levels. Even the drive out of the ASOC headquarters is nerve-wracking. Any turn of the large tires can lead to immediate death. Armand Thirard’s camera pulls right up to the tires and offers close-up views of each rotation. This intimate perspective of the road creates an ominous atmosphere that reminds us of the risks. Clouzot masterfully creates a sense that survival is highly unlikely for anyone. When the drivers bypass an obstacle, there’s certain to be something worse down the road. The stress on these guys makes a mistake more likely, and even lighter conversations maintain the aura of danger. We’re waiting for the challenge that’s too much, and the deliberately paced editing adds to the portentous tone. 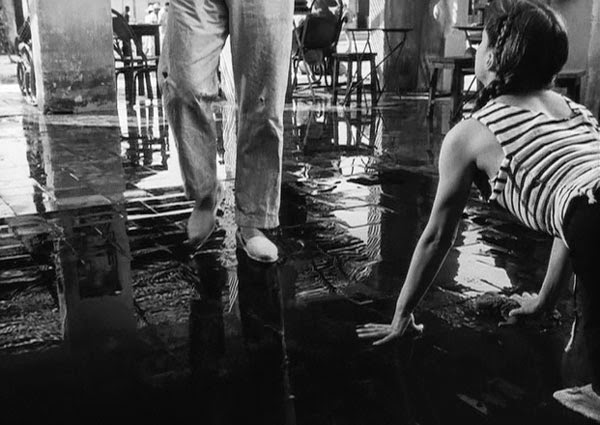 The treatment of women in Wages of Fear is extremely negative and reveals its lack of warmth. Linda loves Mario, and he describes her as “half savage”. When he’s driving away and she tries to convince him to stay, Mario pushes her off the truck and into the mud. Casting his wife as Linda is an interesting move by Clouzot given this unfortunate portrayal. Our first view of Linda shows her cleaning the floor while the camera leers at her. It presents her solely as a sexual object from the start. Mario stands above Linda while she's prone on all fours beneath him. The tone feels similar to a rough Western where the women have a limited purpose. Linda must watch as the man she loves heads towards death and can do little but cry about Mario’s impending fate. He treats her like a nuisance and doesn’t share the feelings enough to care about her sorrow.

An interesting undercurrent is the difference in personalities between Mario and Jo, who plays tough but has lost his nerve. They seem like pals before the journey begins, but the stress changes their relationship. Mario becomes more impetuous and reckless, while Joe becomes so cautious that he can barely react. A telling scene has the younger guy nearly knocking Jo off a cliff while they navigate a narrow perch on the truck. This moment foreshadows both guys’ eventual fates down the road. They find a way to avoid dangerous obstacles, but it’s only a matter of time before something takes them down. Yves Montand was a famous singer and playing his first dramatic role in this film. His focused performance reveals Mario’s skills and why he eventually fails. Charles Vanel was a veteran who’d been working regularly for more than three decades, and you can sense the tension between the actors beyond their characters. 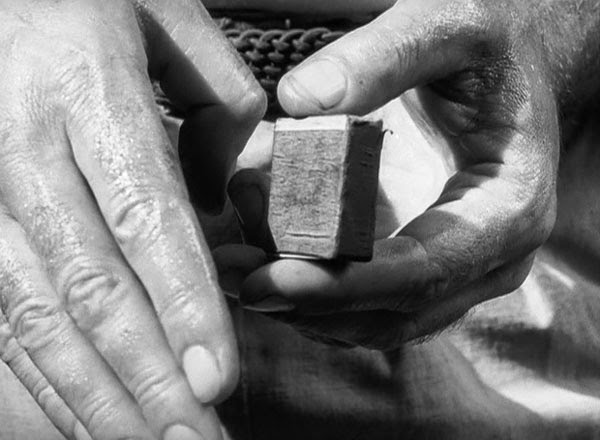 A thrilling sequence involves removing a large boulder that’s blocking their path. Having massive explosives on hand is rarely more essential than at this time. It’s a lengthy build-up to the big moment with Bimba constructing a complex system to destroy the rock. The camera pulls in on the matches and other objects in a brilliant way to convey the stress of this moment. The precision needed to make this tactic work (and avoid fiery deaths) is mind-boggling. Clouzot stretches this scene out to an excruciating length and throws in a few surprises. It feels like a great victory, but there’s still an inevitable feeling that these guys can only flirt with danger for so long. Eventually, their luck will change.

The Wages of Fear faced heavy censorship in the U.S. because of its anti-American stance and nihilistic view of humanity. The cuts removed scenes presenting the difficult lives of the locals and the uncaring feelings of the ASOC. They also deleted moments of “affectionate personal camaraderie” to avoid charges of homosexual themes. It’s unfortunate because these edits mute a lot of the film’s power. It’s a relief to have the opportunity to watch a more complete version through the Criterion DVD. This story is based on a novel by Georges Arnaud and was remade by William Friedkin as Sorcerer in 1977. It’s no shock that a guy like Friedkin was attracted to such a negative worldview. Clouzot finds moments of humanity during the journey, but the end result leaves a hollow feeling about our future. The changes of the industrial age will destroy the world, and even determined individuals can’t stop their inevitable destruction.
Blind Spots Film Review