2014 Documentaries: To Be Takei 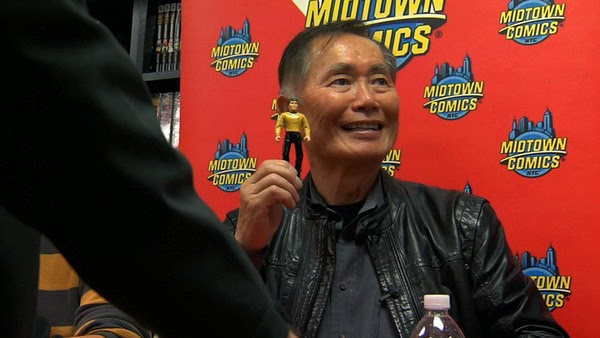 When the original series of Star Trek premiered in 1966, it was a landmark for diversity. The multi-racial cast explored the galaxy and covered important social issues with more depth than you might expect from a ‘60s TV show. I caught little of these achievements when seeing it as a kid in the ‘80s; the outer-space setting and alien worlds drew my attention. Viewing it today, the series is sillier than I remember but has an added relevance because of the cast and subject matter. One of the key players was George Takei, who piloted the Enterprise through the final frontier as Lieutenant Hikaru Sulu. He remains known for this iconic character, particularly following the success of the Star Trek feature films. There’s a lot more to his story than his time playing Sulu, however.

When many people think of Star Trek, their minds go to Kirk and Spock. Even so, few actors from that show have developed a following like Takei. He’s gone beyond the typical fan and built an online fan base through Facebook and frequent appearances on the Howard Stern Show. He’s also become outspoken for social justice and came out as gay in 2005. The different sides of Takei’s personality are chronicled in Jennifer Kroot’s warm documentary To Be Takei. She presents the actor with his husband Brad, who’s been in a relationship with him for more than 25 years. The film jumps around chronologically to offer an interesting portrait of a man who’s becoming more popular every year.

It seems fitting with Takei’s hectic life that Kroot avoids a straightforward telling of his background. She spends a good deal of time on his childhood experiences at internment camps during World War II. One segment that cuts between many versions of the same speech for various organizations is very effective. Takei has clearly found his niche as a public face for important causes apart from his acting career. His descriptions of growing up in those camps are stunning even to someone with some knowledge about them. Kroot returns to this topic several times, and the jumps to different themes don’t always connect so well. Even so, it’s easy to follow around a guy like Takei wherever the movie takes him. What makes this film about more than Takei is the participation from Brad, who doesn’t seem entirely comfortable in front of the camera. The opening scene involves a minor squabble between the couple, who are completely endearing. Brad runs the show at a later autographs signing and is a no-nonsense manager at these events. It’s his persistence that allows the star to be so relaxed for his fans. What’s unfortunate is how long Takei stayed in the closet because of fears that it would hurt his career. It’s a testament to Brad’s love that he was willing to stay behind the scenes for so long. It could not have been easy to watch from the distance and keep their relationship a secret. It’s a telling reminder of our recent progress but shows that our culture still has a long way to go before there’s no stigma.

An interesting subplot is Takei’s strained relationship with William Shatner. We see footage of the roast of Shatner, which includes some vicious swipes that seem to be in good fun. However, there is a slice of truth to everything Takei says about his former co-star. Shatner appears in the film and seems to be joking about their feud, but it becomes clear that animosity is still there. Was Shatner invited to Takei’s wedding? Who’s telling the truth? I expect the reality is somewhere between their stories. I admire both guys yet recognize that some big personalities just don’t mesh. I would have enjoyed more time on this topic within this movie, but I realize the feud wasn’t the focus.

Howard Stern also has a significant presence in this documentary, though he’s supporting Takei. Given the radio host’s reputation, their friendship shows a refreshing meeting of the minds between kindred spirits. They have an easy chemistry that you can’t fake, and Takei has appeared many times on Stern’s show. Clips from their interviews help to reveal why Takei’s built such a following beyond the Star Trek fans. It isn’t easy to move beyond the role of typical genre stars that are locked into certain characters.

An ongoing part of To Be Takei is the attempt to make Allegiance, a musical inspired by his time in the internment. While parts of this passion project remind me of the fictional William Shatner’s attempt to do a musical of Julius Caesar in Free Enterprise, it ends up being a success. Takei may not be a great singer, but it’s easy to make an emotional connection because of his personal history. This engaging film shows how that experience as a kid shaped everything his entire life. It’s a little disjointed and messy, yet that seems appropriate when you consider Takei’s hectic existence. He’s throwing himself into everything, and the late-career renaissance is a testament to this persistence.
2014 Documentary Film Review