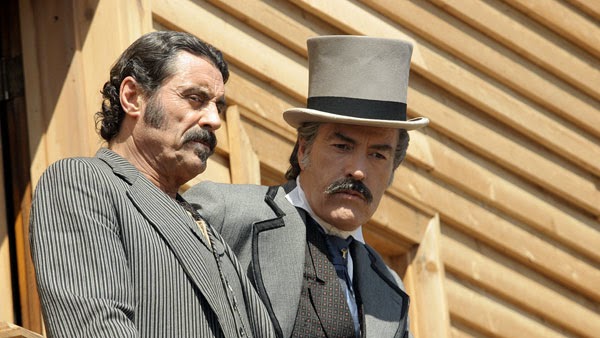 Following last week’s fireworks, the slower pace this time isn’t a surprise. The lingering camera close-ups of Hickok’s body with flies crawling on his face are chilling. There’s no glory in this death, especially in a town like Deadwood. A line of people stroll by the body, yet few of them seem too sad. They arrive to tell their family and friends about the time they saw Hickok. A huckster even tries to sell pieces of his hair, which feels so wrong. Bullock is one of the few with a different outlook on the killing. His face exudes so much sadness and anger towards the pointless killing of his friend. Jack McCall has no remorse for what’s he done, and that makes it even worse. This wasn’t the case where a guy lost his cool and didn’t realize what was happening. McCall isn’t a deep thinker, and he feels like the victor despite the horrendous act. He doesn’t even recognize the danger from Hickok’s allies. The haphazard trial may save him from the law, but there’s little relaxation in his future.

It’s interesting to see a chat between Tolliver and Swearengen, who’ve had few connections since Bella Union's arrival. The image of two powerful men standing above the masses says all we need to know about who’s running this town. They look like giants standing above the minor peasants and deciding how to control their daily lives. The surprise comes not from Swearengen’s opposition to a trial for Jack McCall. What’s noteworthy is how much his opinion makes sense for people beyond himself. He doesn’t want the U.S. government taking any interest in this territory. While keeping the law out of Deadwood benefits his business, the impact of statehood would be much larger. Although it feels out of place, having the trial in a brothel seems fitting in this environment. There are some legitimate businesses and small hints at civilization, but they’re barely impinging on the wild side.

This is another great episode for Timothy Olyphant, who’s coming into his own as Bullock. The moment when he steps into McCall’s cell and seems ready to choke the life out of him is stunning. His anger at the injustice from such a dim-witted guy is totally understandable. Their conversation happens before the trial, which shows how a ridiculous explanation can work because it’s so simple. How can they be sure if McCall doesn’t have a brother that Hickok killed? Criminals don’t always love technology. McCall’s conversation with Swearengen after the verdict is one of the best so far on the show. The powerful man recognizes when a guy is bad for business, and his advice perfectly summarizes the situation. Even in a town like Deadwood, there’s bound to be someone who cares about right and wrong. The simplicity in his statement to “run for your fucking life” is brilliant. Bullock’s choice to pursue the killer validates Swearengen’s points, even if he cared little for McCall’s survival.

The other intriguing story line is what will happen with Andy and his nasty illness. Tolliver is forced to exile his friend in the woods, but he still could make an impact. A very drunk Calamity Jane comes upon the deathly pale guy, and their scenes are harrowing. It isn’t clear how contagious he is, but I have a feeling that he might cause serious damage to the rival gambling house. Tolliver sends a minion to Nebraska to acquire some medicine, but will it arrive in time? The scene where he convinces a simple-minded guy to travel there is funny but doesn’t inspire much confidence in his skills. Considering the fact that the next episode is called “Plague”, I have a feeling this disease is going to wreak some havoc.

I’ve yet to mention Alma Garrett and her interest in uncovering the truth about her husband’s death. She’s hired Bullock to investigate the case, and I expect that it will get interesting. Swearengen commissions Trixie to “help” Alma by getting her back on drugs, but the outcome is much different. Despite fine work from Molly Parker and Paula Malcolmson, I wasn’t that interested in their scenes. Trixie’s connection with the young girl does show a different side of her. I’m still unsure of where Alma’s story is heading, particularly with the unresolved gold claim. The challenge is making these moments stand out when so much is happening with McCall’s trial downstairs. Despite some more downtime this week, the pieces are in place for a lot to happen in the next episode. The characters keep showing more depth, and that’s the key to maintaining the momentum near the midpoint of the season.
TV Review