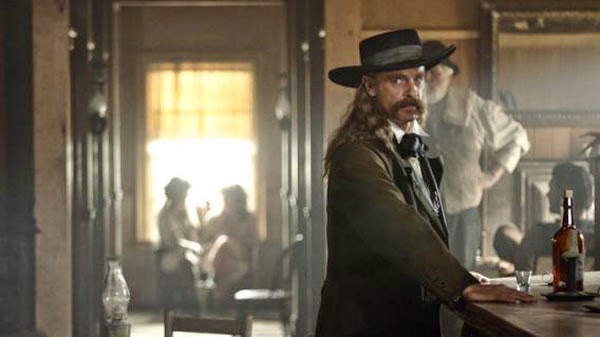 The best TV series are created with few thoughts about longevity. There’s immediacy to the opening seasons of dramatic juggernauts like Battlestar Galactica and The Shield that announces their arrival like a massive crack of thunder. That same urgency has been with Deadwood since the start, and it reaches new heights in the fourth episode. It takes courage to build up a character and make us identify with him and then murder him. I’ve purposely read little history about the historical figures on this show, but I knew that “Wild Bill” Hickok was shot and killed. There was plenty of foreshadowing in this episode that Hickok had accepted his fate and knew that death was coming. Even so, watching it happen so quickly in an episode where so much occurs was shocking. This felt like a moment that would normally happen in a finale or a least the penultimate episode. Taking him out in the fourth hour and immediately after killing another recurring character is just brilliant.

It’s clear from the pilot that Jack McCall (Garret Dillahunt) will be trouble for Hickok. He’s determined to prove that he’s a better man than the famous gunfighter. Losing everything at poker to the very man he detests pushes him to another level. There’s so much to dig into about this moment! Does Hickok sacrifice himself by sitting with his back to the door? He doesn’t realize McCall is planning to shoot him, but he’s let go of the fear that’s been a weight on his soul. When he stares into the mirror and ties his red sash, Hickok decides that he’ll let fate control his future. It’s just too exhausting to spend every minute wondering if it will be his last. It’s unfortunate that he found an ally in Bullock so close to the end. His affectionate nickname of “Montana” says it all about what he thinks of the guy. They were destined to be lifelong friends, but surviving in a lawless town is no picnic.

Bullock’s face while seeing the final moments of his friend’s life says it all. He’s devastated by the shocking death, and I’m certain he won’t let this crime stand. This feels like the moment that changes the course of his life and of Deadwood on the whole. There’s going to be some type of law, and Bullock’s certainly going to be a part of it. The question is whether he’d actually bring his wife and son to this type of community. They’re waiting in Michigan and plan to join him in the future, but the current state doesn’t seem like the right one for a family. I’m thankful that we did get at least one scene between Hickok and Al Swearengen. Both are sizing up the other and trying to figure out where they stand. What’s surprising is how well Hickok deceives a guy who’s used to having all the power. When Swearengen realizes he’s been played, he’s ready to seek retribution because it rarely happens to him.

The episode begins with the aftermath of last week’s killing of Brom Garret, and his wife Alma (Molly Parker) suspects foul play. When E.B. Farnum (William Sanderson) offers to buy her husband’s claim, it only enhances her suspicions. It’s nice to see Molly Parker finally getting a chance to do something beyond looking worried. She’s a talented actress and plays the mix of grief and anger just right. Hickok is a good choice to investigate the killing, though he does carry a high profile. When he enters the bar to speak with Swearengen, it stirs the whole establishment. Asking his friend Bullock to help is another way that Hickok shows his admiration for the guy. I suspect that both killings will play a big role in the rest of the season. There is an eye witness to Garret’s death, though Ellsworth (Jim Beaver) doesn’t seem interested in doing the right thing. Instead, he approaches Dan Dority with a clumsy pitch that doesn’t convince me his chances of survival are great.

The events at Bella Union feel like they’re happening in another universe. Cy Tolliver is throwing around money like it’s growing on trees and trying to show that he’s different from Swearengen. It will be interesting to see if the illness carried by their new arrival decimates their business. Once they recognize the danger, it may be too late. Swearengen recognizes that vigilance is the only way to avoid losing power, and Tolliver may not have the same alert demeanor. There are too many people lurking in the shadows and waiting for you to fall. Guys like Farnum may seem weak on the surface, but they’re opportunists who will sell their souls to the highest bidder. What chance did Hickok have in this cruel world? Bullock may be able to fly under the radar, but that position can only last for so long. Once he stands up for his friend, it’s only a matter of time before he’s the next target.
TV Review