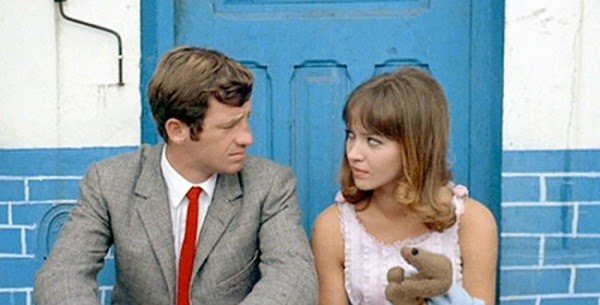 We’ve all dreamed of escaping from regular life and having adventures. The thoughts usually happen in the midst of mundane work, and it’s never taken that seriously. Admittedly, there are a lot of boring people in this world. While we may think of ourselves as the fascinating outsider that stands apart from the masses, the truth is that we’re usually part of that crowd. Ferdinand Griffon (Jean-Paul Belmondo) thinks he’s the most exciting guy around because he’s interested in books and films, but he’s in the same world. The patrons at his in-laws’ party are dullards that speak in advertising slogans, so he’s probably at the top of that heap. Even so, this might not be a proper excuse for leaving his family and starting a life of crime. His accomplice is the stunning Marianne Renoir (Anna Karina), which makes the jaunt more thrilling. She’s a former lover and much different than his wife, so Ferdinand sees an exit. This can only lead him to bad things.

My intro gives more credence to the plot of Pierrot le Fou than it receives from Jean-Luc Godard. Ferdinand’s adventures with Marianne are mostly an excuse for the filmmaker to experiment. Released the same year as Alphaville, it subverts our expectations of the genre but uses a lighter approach. Characters directly address the audience and are clearly performing for us. When she promises Ferdinand that she’ll never leave, Marianne looks twice at the audience to see if we believe her. We don’t. There’s little sense that Ferdinand and Marianne are real people. The fact that she calls him Pierrot makes it clear that he’s playing a character even within this story. They’re living out their own movie while Godard shapes the narrative. Stolen money brings hoods on their trail, and we’re still headed towards the expected noir ending despite the brighter setting.

Marianne and Ferdinand’s travels include standard moments for lovers on the run. They start out with fairly innocent crimes like not paying for gas and raise the stakes. Marianne keeps pushing him to let loose or she’ll lose interest. At one point, he drives a car into the water to prove he's crazy. Of course, it also makes him fit the “fool” of the film’s title. That moniker could apply to Godard as the director. He’s taking risks and pushing us out of the narrative, and that freewheeling style is enjoyable. On the other hand, his daring moves feel a little hollow since it’s all for show. He’s sticking his neck out there and proving he’ll try almost anything, yet we’re still living in the confines of a familiar genre. It’s this contradiction that makes Godard interesting since we’re still in a recognizable film world.

Going back to the opening party, Ferdinand also meets American filmmaker Samuel Fuller, who describes film as a “battleground” filled with emotion. It’s a brief cameo but nods at the camera about what Ferdinand’s missing from the life. He’s trying to find ideas, but it’s the feelings that keep them afloat. Marianne may seem emotional, but her passions are so fleeting that they don’t stick. The camera adores Anna Karina, especially in the early going when Ferdinand is falling back in love with her. It’s obvious that Godard loves Karina since the perspective feels so personal. Jean-Paul Belmondo is a cool substitute for the director and brings star power to the offbeat proceedings. He brought a similar charm to A Woman is a Woman, so it’s no surprise to see him thrive in this film.

Pierrot le Fou closes with a bleak finale that throws in a few twists. Ferdinand’s last scene is a classic joke on a character that can’t decide what he wants. Godard is referencing so much film history yet still puts his own stamp on it. The gas station sequence feels more like a Chaplin silent comedy than a daring ‘60s movie. Belmondo and Karina essentially dance with the attendants to get away, and I could hear the familiar piano music in my mind. The characters narrate what’s happening throughout the movie like they’re recalling it years later. This raises the question of whether it’s happening or just in their minds during the car ride. That possibility is never addressed, so I doubt it holds water. Even so, it’s an interesting theory. The complexities within this story offer many engaging moments with multiple interpretations. Godard’s experiments don’t always work, but the result is a highly entertaining journey through the past (and future) of cinema.
Film Review