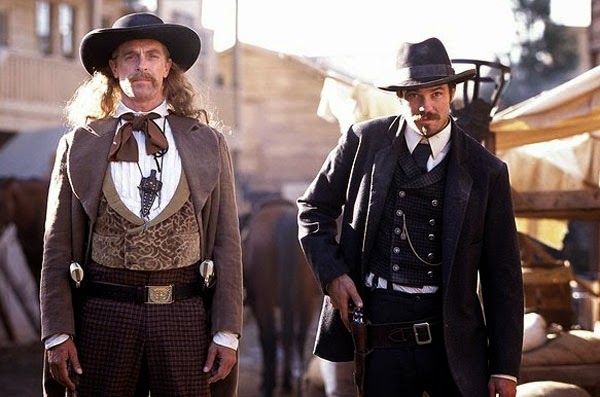 Our TV landscape has changed so dramatically in the past 10 years that it’s barely recognizable. There are far too many shows for anyone with a full-time job and any semblance of a life to follow. The rise of DVR has made it easier, but where is the time to watch them? The wealth of new material causes acclaimed series to drop even further down the waiting list. One example that’s been near the top of my list for a long time is Deadwood. Premiering on HBO in 2004 and airing for three seasons, the David Milch western earned heaps of praise but didn’t last nearly as long as The Sopranos or The Wire. HBO’s recent deal with Amazon Prime offered the perfect opportunity for me to dive into it. Over the next 12 weeks, I’ll post my thoughts on a season one episode every Wednesday. I’m entering this adventure fresh and haven’t been spoiled on any major details. My knowledge is limited to a few actors and the setting. I hope that you’ll follow me on this trek through the Old West.

I’m fairly knowledgeable about westerns, particularly classics from John Ford, Howard Hawks, Anthony Mann, and other standouts. There are few TV westerns that I’ve seen that embody the normal themes on the same level. After a single episode, I expect Deadwood to be an exception. We begin with Seth Bullock (Timothy Olyphant), who resembles the marshals from plenty of movies. A mob arrives to remove a criminal in his custody, and the result seems obvious. Bullock will refuse to turn over the guy and insist that he receive a fair trial. It’s a relief to note that little of that happens. Instead, he conducts a public hanging in front of the mob. I figured it had to be a trick to fool them, but the horse thief is apparently dead. Immediately, Milch sets up a different universe where even the “good guys” will take violent action with little hesitation. It’s hard not to see Raylan Givens in Bullock given Olyphant’s distinct vocal delivery, but it will be interesting to see how different they are.

This opening sets up the opposing forces of civilization and the wild, yet it’s the former that does the killing. What are we to make of this change? Bullock joins his partner Sol Star (John Hawkes), and we’re on the way to Deadwood in the Dakota Territory. Despite his interest in starting a hardware business, it’s hard to believe that Bullock won’t get involved in some protective role again. This town is known for having no law, but powerful forces control the action. It’s no surprise that the most imposing character is Ian McShane’s Al Swearengen. I’d heard enough about his character from the pop culture world to know that he’s quite a force. The moment when Swearengen turns the tables on his prostitute Trixie (Paula Malcolmson) and puts his boot on her throat is chilling. He can be friendly when it serves his interests, but Swearengen seems mostly concerned with maintaining power. His choice on resolving a corrupt financial deal is cold and efficient. There are so many forces working to gain a foothold in Deadwood, and I expect that none will last long if they cross Swearengen.

It’s interesting to note the limited scenes for women in this premiere. Trixie killed a customer who was beating her, and she receives the most screen time. Her final scene with Swearengen offers another example of his power. We get brief glimpses of Molly Parker’s Alma Garret looking concerned for her husband as he enters a dangerous (and fake) business deal. I expect that we’ll see more of her in the future. I’m not sure if her husband is going to be so lucky. Robin Weigert also makes quite an impression as the gruff Calamity Jane, who arrives into town with the famous Wild Bill Hickok (Keith Carradine). She’s another character who is certain to make an impression going forward. Given the wealth of characters introduced in this pilot, it’s surprising that so many feel unique. It never hurts to have character actors like Jim Beaver, Garret Dillahunt, and the always creepy Brad Dourif in this group. This cast is filled with familiar faces that excel in these distinctive background roles.

Hickok’s presence offers an interesting look at the disruption caused by having a notorious celebrity in town. The local journalist is star-struck when asking for an interview, while Dillahunt’s Jack McCall wants to destroy him at the cards table. Carradine plays Hickok like a stand-up guy with a weakness for gambling, and his immediate connection with Bullock should make them strong adversaries against Swearengen. When a shady guy starts rambling about a vicious attack from Native Americans, the unlikely duo senses that something isn’t right with this story. They’re looking for justice, while Swearengen’s speech reveals he’s concerned with money. Bullock doesn’t seem engaged by their hardware business; turning in his badge doesn’t mean he can turn off that side of his persona.

The Deadwood pilot must do the heavy lifting and provide so much exposition. We barely see characters that will certainly play a major role, so it’s too early to judge where many are headed. Regardless, this opening sets the stage for an excellent show. There’s a confidence about the set design and look that isn’t part of most premieres. Once the action gets rolling, I expect the show to keep getting better. Milch sets the pieces in motion and offers enough to keep us engaged without over doing the plot. This is a far cry from the opening hour of Rome, which had overwhelming exposition. There are still great character moments across the board, and the pace keeps moving. It’s a breezy hour that doesn’t feel like work, and that isn’t always true with prestige dramas. I can’t wait to see where we’re headed.
TV Review