The Hobbit: The Desolation of Smaug and the Benefits of Lesser Expectations

It’s easy to forget the excitement that surrounded The Fellowship of the Ring when it premiered in 2001. There was a rare trip for me to a late-evening showing on the first night. I’m not a diehard Tolkien fan but love the fantasy genre, and I was blown away by how well Peter Jackson created Middle Earth. The stakes felt so high, and even the extensive digital effects didn’t take away from the impact. The Two Towers cranked up the action and offered a battle sequence at Helm’s Deep that rivaled anything that I’ve seen on screen. That trend continued with The Return of the King, but I was less immersed in the final chapter. It’s still a great achievement, yet I was a little worn down by the repeated visits to Middle Earth. I’ve watched that film much less than the first two installments. This didn’t bode well for Jackson’s next foray into that universe with The Hobbit.

When the first of three movies presenting the smaller book arrived, I caught it a few weeks after the release. The scale remains impressive, and it still feels like the same world. Even so, there is something less essential about An Unexpected Journey. The visual effects are more intricate, yet they feel like too much at times. Watching hundreds of orcs falling off a cliff brings little tension because it’s overkill. We don’t connect with most of the dwarves on the same level as the fellowship. I can name very few of them and just watched the sequel a few days ago. The saving grace is Martin Freeman as Bilbo Baggins, who shows genuine heart in the role. Ian McKellan still brings the power as Gandalf, and they keep us engaged during the less thrilling portions. It’s hardly a failure, but I was surprised by how forgettable it was. Even when Jackson fails, his movies generally stick with you. 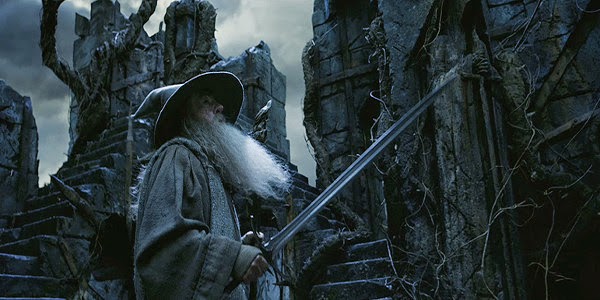 My lukewarm reaction to An Unexpected Journey caused me to skip The Desolation of Smaug this past winter. I was curious about the dragon and how the story could be split into three movies. Even so, this felt less like a must-see that required a theater visit. My expectations were low, and I was just hoping that it would provide solid entertainment. I also knew very little about this film beyond the basic plot. I read the novel multiple times as a kid, but it’s been a long time. The result was a better movie that delivered plenty of surprises. Despite the 161-minute running time, there’s a forward movement that keeps you engaged. Fewer introductions are needed, so we’re able to jump right into the story.

A frequent topic among film lovers is how much each of us prefers to know prior to seeing a movie. I used to devour trailers and reviews, but that was before the Internet became the primary source for information. I reached a point where there were too many expectations in my mind before I stepped into the theater. Today, I’ll watch the previews and glance at news, but I rarely dig into reviews before seeing the movie. I’ve moved closer to the camp that wants to know as little as they can. I still have a general idea of what to expect, but it’s less set in stone. That’s the best way to go and can lead to more surprises from both indies and blockbusters like Jackson’s second Tolkien franchise.

The Desolation of Smaug works because of the momentum driving us towards the inevitable conflict with the title character. The unrecognizable voice of Benedict Cumberbatch adds serious menace to the beast that does not enjoy being disturbed. There are impressive sequences like the barrel escape and the spider attack, and those keep the journey from being too predictable. There’s also a subtle love story between the elf Tauriel (Evangeline Lily) and the dwarf Kili (Aidan Turner) that works surprisingly well. Their connection is more interesting than Thorin’s quest to be king or even Bilbo’s slow corruption by the ring. The expensive spectacle draws the crowds, but what connects with us is the heart within the excitement. Legolas (Orlando Bloom) isn’t at the center of the story, but we care more about his survival than most of the dwarves. The reason is because we’re already in his corner after the other three films. Jackson and fellow writers Fran Walsh and Philippa Boyens also find ways to bond us with certain individuals like Bard (Luke Evans). While that’s important to the film’s success, it also nearly kills the final act. 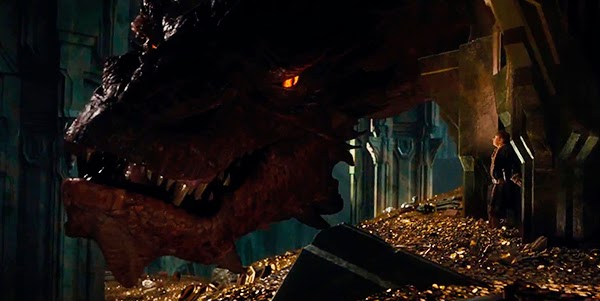 The history of cinema dragons is hardly a grand one. The practical effects in Dragonslayer are worth noting, but it doesn’t hold up so well. CGI creations run the risk of looking silly and often don’t mesh with the rest of the movie. The main reason that Dragonheart is entertaining is because of Sean Connery. What the folks at WETA have accomplished with Smaug is remarkable. It’s easy to treat him like a living being and not stay distanced. The issue comes with just how long he chases the dwarves around his home. Reviews that say “it’s too long” are typically lazy, but they do sometimes have merit. This could have been a killer two-hour film, but you feel the length with the extra time. Smaug is a stunning dragon, which is why it isn’t wise to wear down the audience by the time he arrives.

Since this is the middle act of a trilogy, the cliffhanger ending is hardly a shock. Jackson wants us to leave needing to coming back to find out whether Smaug decimates Lake-town. Readers of the book know the answer, but the spectacle will probably make it worthwhile. There’s a lingering question with this type of ending about audience satisfaction when they leave the theaters. Will they audibly sigh and exit angrily with thoughts of doing harm to Jackson? Given the precedent set by films like The Matrix Reloaded and The Two Towers, we’ve grown more accustomed to it. If the movie works for more than two hours, waiting a year to see it finish is understandable. Despite my appreciation of this sequel, I may still hesitate before checking out the finale. The Battle of the Five Armies may jump off the big screen, but it will need to do more to deliver a truly satisfying conclusion.
Film Review