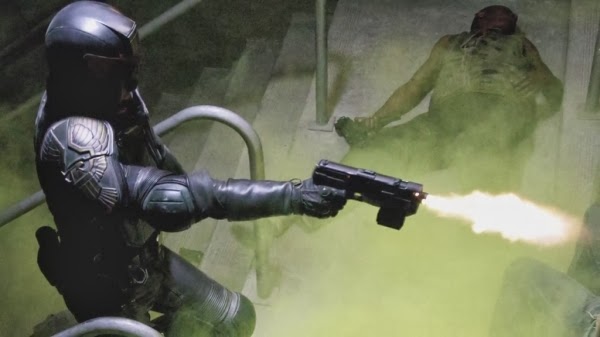 This year was a tipping point for me with tentpole action films. It’s been a challenge to get excited about most of them, especially franchise continuations like Man of Steel and Star Trek into Darkness. The budgets are larger than ever, and established actors have brought respectability to even the silliest premises. Even so, there’s a sense that something is lost within the complicated plots. When the movies are clocking in at well over two hours, filmmakers keep stretching the scope to epic levels. While that leads to some impressive visuals, it doesn’t always deliver great entertainment. What I’m seeking is a movie with modest goals and a simple premise that’s executed brilliantly. A savior has arrived, and its name is Dredd. The title character isn’t saving the world, yet there’s a weight to his story that’s missing from the standard blockbuster. Despite watching it at home on a modestly sized television, I was thrilled to check out this tight and clever thriller. 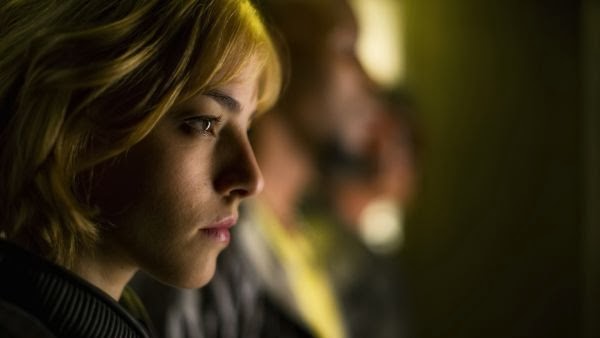 In a place called Mega-City One in a dystopian land called the Cursed Earth, the Judges control law and order. Judge Dredd (Karl Urban) arrives at the Peach Trees slum skyscraper to investigate a murder with trainee Cassandra Anderson (Olivia Thirlby). The duo gets caught in a bloody fight with the forces of the drug lord Ma-Ma (Lena Headey) and must battle to reach the top floor and survive.

This environment works because Pete Travis doesn’t try to show us every aspect of the city. Instead, he stays focused on the story at hand yet uses enough digital effects to sell it. This is a heightened reality, so he isn’t trying to explain how a 200-story slum would function. Instead, it’s merely a setting to allow Dredd to battle with many gun-toting baddies. The film was shot in Johannesburg and Cape Town mostly inside a studio, yet the reliance on visual effects works because it’s such a stylized production. When characters are thrown off buildings and their views are slowed down with the “Slo-Mo” drug, it’s entrancing because it’s so different. It’s clear that this movie was designed for 3D from the start and used clever devices to take advantage of the technology. 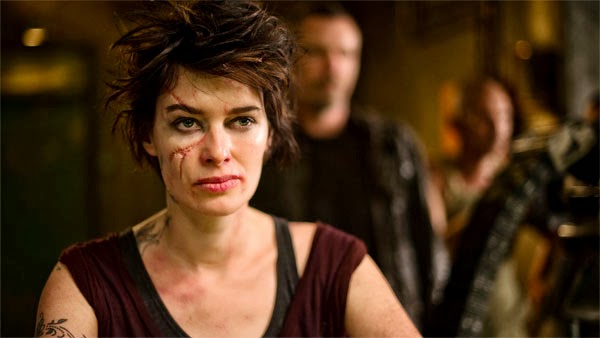 Although it uses a dystopian environment, Dredd isn’t concerned with making any grand statements. What it’s doing is deviating from the current trends of the action genre. It’s an ultra-violent exercise yet doesn’t feel excessive because it seems natural in this hardcore atmosphere. When Ma-Ma tells her underlings to skin her rivals and throw them down the atrium, it sets the tone right away. This is no bloodless comic book story. The reported budget was only $45 million, so Writer Alex Garland (28 Days Later) could stay focused on the main characters. That’s half of the amount for the 1995 Stallone version, and it’s an even larger spread when you consider inflation. We spend nearly the entire film at the Peach Trees, and that minimalist approach leads to an original and tense showdown.

Despite never removing his helmet (a comics staple), Karl Urban is excellent as the grim-faced title character. Dredd is all business, yet there’s a sense of justice behind the guy. This contrasts sharply with the corrupt judges that Ma-Ma hires. Urban isn’t so recognizable to distract us yet has a formidable screen presence that makes his survival more believable. Olivia Thirlby seems like an odd choice for this tough universe, but it’s this exact quality that matches Anderson’s lack of experience. She stands up well to Wood Harris’ (The Wire) thug in her big moments and has a believable connection with Dredd. It’s also refreshing to not have a romance between the leads awkwardly thrown into the mix. Lena Heady has plenty of nastiness as Ma-Ma and makes for a worthy adversary. Her willingness to sacrifice anyone to stay in power makes her quite a challenge. 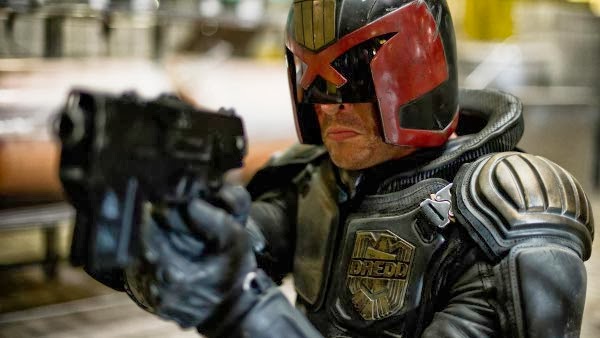 Analyzing Travis' work is challenging due to unconfirmed reports that he played a lesser role in the final product. Regardless of that fact, this is a striking movie that bypasses nearly all the pratfalls of the expected formula. Compared to a stinker like Elysium that thinks it’s smarter than it is, Dredd knows exactly where it lives. It’s a fast-paced and gritty film that delivers all the fun and action that you want from a genre film. It’s too bad that its limited box-office take may prohibit a sequel from happening. I’m curious about where they could have taken the characters and this universe. This focused story is a sharp introduction to a world that I wouldn’t mind revisiting, and that’s pretty rare these days.