Orange is the New Black: Believe the Hype 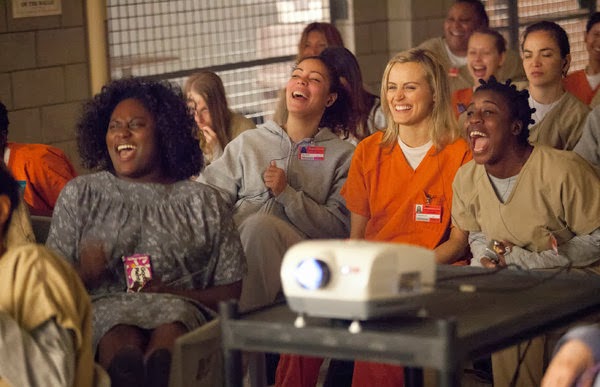 In today’s packed TV landscape, it takes quite a lot to stand out from the crowd. When a show develops massive critical buzz and actually delivers on that promise, it’s a rare treat. Orange is the New Black recently earned a score of WGA nominations, and it deserves every one of them. It’s a brilliantly constructed series that begins as a fish-out-of-water comedy and turns into something else entirely. The huge ensemble is filled with engaging characters that would be the prime standouts in a lesser project. Packing the cast with so many unknown actors helps us to watch the show without preconceived notions. Only Laura Prepon, Kate Mulgrew, and Natasha Lyonne are recognizable apart from this show as the inmates, and all make us forget their past work. It’s a breakthrough for women and reminds us of the potential to toss aside gender expectations within this great medium.

Orange is the New Black stems from a memoir of the same name by Piper Kerman, and it pulls a lot from her real-life experiences. It’s created by Jenji Kohan, who’s known for Showtime's long-running series Weeds. The writing staff is filled with women, and that brings a fresh perspective within the male-dominated TV landscape. It stars the relatively unknown Taylor Schilling (Mercy) as Piper Chapman, who is sent to prison for a drug-trafficking crime she committed 10 years earlier. While her fiancé Larry (Jason Biggs) waits outside, she grows more accustomed to prison life and becomes alienated from their upper-class New York world. The situation’s complicated by the presence of her former lover Alex (Prepon), the drug dealer involved with the crime. Chapman is way out of her element, which leads to numerous gaffes that end up threatening her very existence. 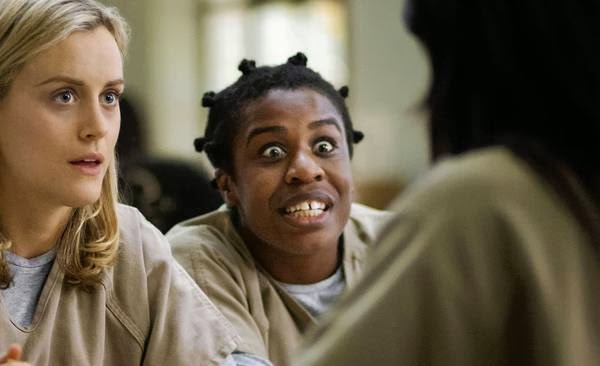 This brief description fails to do justice to the brilliance of this remarkable series. Sending an upper-class white woman to jail could be the plot for a sitcom, but there are few generic trappings. The administrators are corrupt, but they rarely fall into expected categories. The prison guard George “Pornstache” Mendez (Pablo Schreiber) is a despicable guy, yet there’s a weird genuine side to his simple world view. Characters initially seem terrifying and become something different once Chapman (and the audience) gets to know them. A prime example is Suzanne “Crazy Eyes” Warren, played wonderfully by Uzo Aduba. She quickly falls for Chapman and believes they’re a couple, which leads to comedy. What makes Suzanne so intriguing is the other side to her character. She essentially has a child’s mind and is nothing like the delusional crazy person we anticipate during her early scenes. Aduba makes Suzanne so original that it’s impossible not to care about her.

It’s impossible to list all the remarkable performances from the cast; there are so many unsung heroes. Each episode shatters the Bechtel Test and makes it feel like an antiquated measure. Flashbacks show us the characters before their jail time, and they add depth without getting too intrusive. Mulgrew’s “Red” initially seems like the frightening kitchen lady of the laziest comedy, but she’s nothing of the sort. Although she protects strength, it masks a vulnerability that’s revealed through poor treatment in her past. Red takes a motherly approach to many of the girls, but she can act rashly when threatened. 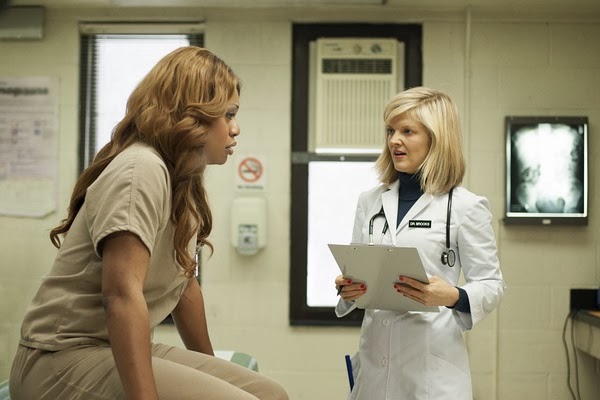 A similar surprise is the warmth behind the tough façade of Miss Claudette (Michelle Hurst). She rooms with Chapman and lays down the law, but she’s hardly a cranky old woman. When a chance for love and early release appears, her walls start to crack. There’s a danger in getting too positive in this mind-numbing environment, however. When Chapman finally lets loose, she ends up in solitary for “lesbian activity”. The boisterous “Taystee” (Danielle Brooks) is thrilled to get out of prison but quickly realizes it’s a different kind of nightmare. There are constant examples of positive events undercut by the limits of the system. Transgender inmate Sophia (Laverne Cox) runs into obstacles when her much-needed pills are cut. Cox does a remarkable job in one of the show's most affecting performances.

If there’s an area where Orange is the New Black falls short, it’s with certain depictions from outside the prison. Chapman’s mom and best friend Polly (Maria Dizzia) are never as interesting as the inmates. Her laid-back brother Cal (Michael Chermus) has some nice scenes, but he’s around mostly for comic relief. Even so, it makes sense because we’re invested as viewers with Chapman’s story. We don’t care as much about Polly’s baby or Cal’s engagement because they’re outsiders. That’s a major challenge when dealing with Larry, who gets writing and radio gigs through his story as Piper’s suffering fiance. From her perspective, he’s betrayed her and doesn’t understand her situation. The reality isn’t that simple, though. Biggs is well-cast as a guy who tries to do the right thing but just can’t cope with all the hurdles. He’s right to be concerned with her relationship with Alex, and the final destination for Larry and Chapman is sealed once she enters the prison. A common trend for Chapman is discovering that good intentions usually lead to disaster. When she sticks her neck out to save Pennsatucky (Taryn Manning) from the psych ward, the reaction isn’t so gracious. Speaking honestly with crazed individuals is rarely the right move. Pennsatucky is unhinged and ready to murder someone, and Chapman’s liberal worldview makes her a good target. Chapman’s innocent discovery of a chicken in the yard also sets off an unintentional firestorm. On her first day, she accidentally insults Red and is nearly starved to death. It’s best to say little and do nothing or risk the consequences. Even the friendliest inmates can turn on you if you press their buttons. Orange is the New Black shows both the humor and stress from this environment. It’s a comedy on the surface, but there’s plenty of menace beneath it. The brutal last scene ends the finale with a shuddering chill. Can Chapman recover? I can’t wait to find out next season.
2013 TV Review