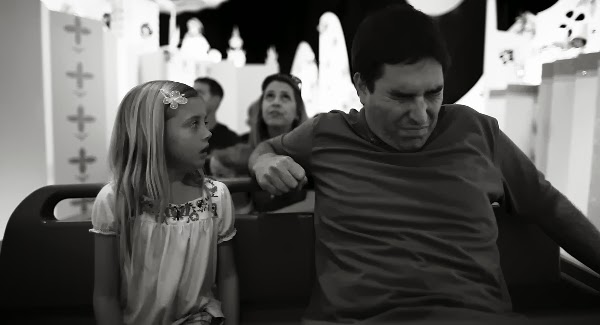 If you’ve followed my blog for a little while, it’s no secret that I’m a big fan of theme parks. We visited Disney World frequently as kids, and I’ve gone multiple times as an adult with our family. The story of Escape from Tomorrow’s filming is intriguing. The guerrilla production is old news, so I won’t waste any time describing it again. Writer/Director Randy Moore’s surreal tale of a family’s last vacation day in Orlando has so much potential. Any film that opens with stunning black-and-white footage of Big Thunder Mountain Railroad is right up my alley. What’s amazing is how quickly it squanders that goodwill. How can a sci-fi film shot at the Disney theme parks fall flat? The reasons go beyond the toothless satire and relate closer to the basics of storytelling. Despite some fun gags, Moore gets sidetracked and loses sight of the mission statement that seems to be driving his film. 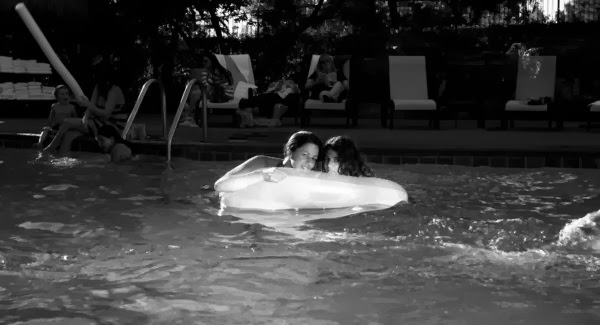 Moore visited Disney World frequently as a kid, and he seems to be working through some issues with his dad in this movie. The main character is a distracted middle-aged father who cares little about his wife or kids. Jim (Roy Abramsohn) is most concerned with stalking and leering at two French teenagers. His behavior goes beyond a guy who takes a quick glance at an attractive girl. He barely hides the interest and acts terribly in front of his son and daughter. There’s nothing wrong with having a despicable lead character in the right hands. The problem is that Jim’s issues are so clumsily handled and occupy such a large portion of the movie. The entire middle act involves him tracking them from ride to ride, and it quickly grows tedious. What does this tell us about Disney and their parks?

On the positive side, the early scenes provide some cool perspectives on the Disney attractions. Snow White’s Scary Adventures is easy to portray in a terrifying fashion, and even Winnie the Pooh looks eerie. Stripped of its soundtrack and replaced with a creepier score, It’s a Small World is hardly magical. The black-and-white cinematography brings out the manufactured nature of these images. There’s the potential for something intriguing within this project. The problem is that the rides occupy such a small portion of the movie. They become the backdrop for the disintegration of an unhappy guy who’s just lost his job. There’s little to latch onto with that plot, and Abramsohn makes Jim hard to even tolerate. 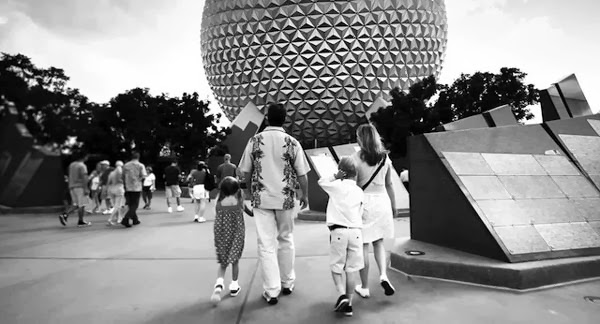 Moore spends a small portion taking shots at the Disney princesses, who work as prostitutes for wealthy business men in this vision. That’s hardly a huge stretch and has potential, but Moore is more interested in a crazy ex-princess obsessed with Snow White. He’s drifting around the notion that Disney sells about fulfilling dreams. That plays a key role in the ending, which does more than showcase a few odd parts of the Disney model. Jim literally becomes the version of himself that he dreams of being after a dire end. The key moment is a ridiculous scene in a room below Spaceship Earth with a helpful scientist. The shot of a miniature Spaceship Earth on top of Jim’s head is laughable but shows what might have worked for this movie. If Moore had gone for it, it could have worked as a ridiculously subversive comedy. He tries to walk the line between the sci-fi premise and Jim’s personal descent, and the result is all over the map.

For a Disney parks expert, there are so many silly moments. Moore shot the film in both Disney World and Disneyland, and he shifts frequently between the parks. Characters enter Soarin’ in EPCOT and walk into the queue for the California version. He also rides It’s a Small World from Disneyland, which might explain the confusion. Jim really needs to invest in a Touring Plan and stop crisscrossing the parks with his tired kids. He goes from Tomorrowland over to Adventureland and then back to his original spot. Who is running their day? There are also really obvious green screen moments that weren’t shot in the parks. Those take you right out of the movie and make it harder to accept what’s happening on screen. 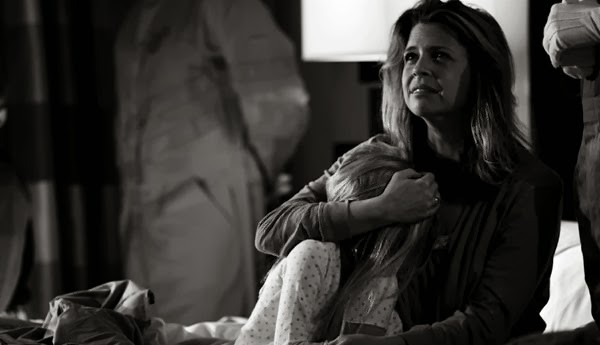 Escape from Tomorrow is a mess, but I might forgive a lot if Moore even tried to create an interesting female character. Jim’s wife Emily (Elena Schuber) is depicted as being a constant nag who cares little for her husband. The other women are simply sex objects. It’s easy to understand why Emily is frustrated with the sleazy and constantly distracted Jim. However, that doesn’t excuse Moore from making her such a one-note character. Schuber has little to do but complain about his failings as a father. His attempts to romance her are ridiculous; he wants to make out on Winnie the Pooh with their kids in the vehicle. Her rejection makes total sense, yet she’s presented as the villain in that scenario.

This limited perspective on women is the real crime within this film and kills its chances to work as a satire. Moore can’t pull a rabbit out of a hat and change the game in the last act. He’s already blown his chance by that point. The limited perspective on gender relations is so frustrating and carries through most of the film. There’s a truly subversive film hidden within Escape from Tomorrow, but Moore spends most of his time in less thrilling territory. Many expected Disney to sue him and prevent its release, yet the company has remained silent. That feels like the right move; there's no need to bring more attention to a film that's far less subversive than it seems.

Note: I caught up with Escape from Tomorrow at a local screening by the Webster University Film Series here in St. Louis. They're a great local resource for seeing independent and foreign films that aren't playing elsewhere in town.
2013 Disney Film Review