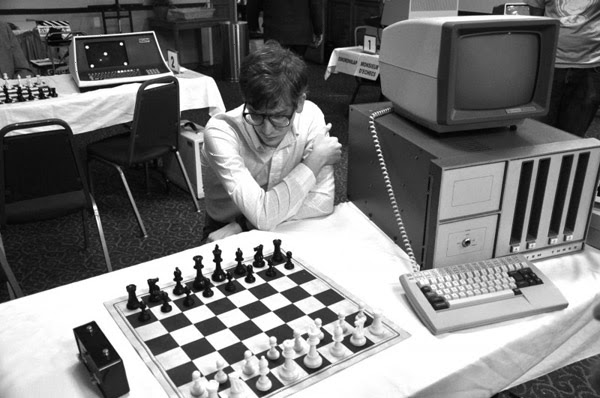 In the TV series Terminator: The Sarah Connor Chronicles, one possible route to the apocalypse was a computer chess program known as The Turk. This artificial intelligence program may have evolved into Skynet and caused our destruction. The programmers in Andrew Bujalski’s Computer Chess are a long way from this point. During the early 1980s, they arrive at a dingy hotel to test their programs' chess skills. The socially awkward guys may be working on the cutting edge of technology, but they’re hardly ready to take on the world. Instead, they bumble through various comic situations and are really unsure of themselves. Their awkward interactions remind us of a simpler time when computer programmers weren’t superstars. When having even one girl at this event is such a noteworthy achievement, you know we haven’t reached the heights of social success. 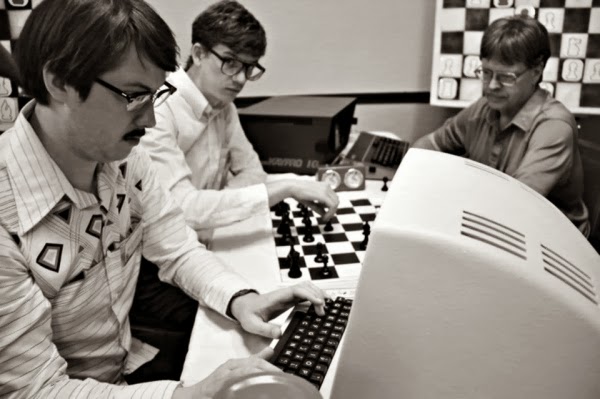 Shot in black-and-white in a home-video style, this film isn’t thrilling. The slow pacing is by design and fits with the theme, however. Its centerpiece is the oddball Michael Papageorge (Myles Page), who spends the event trying to find a room. He’s rejected frequently and ends up sleeping in random locations. Near the end of the weekend, the programmers even plot an algorithm showing all of his travels around the hotel. Papageorge has little time dealing with chess, and that matches Bujalski’s limited interest in the subject. He’s more concerned with showing how the awkward guys struggle to interact with others. A couples group is also meeting at the same hotel, and there’s a cringe-inducing moment where a pair tries to seduce a young programmer. He sits on the edge of the bed and doesn’t seem to comprehend their goals until the action starts happening. While that moment induces a few chuckles, it goes on for a really long time in the 92-minute film.

Unlike Bujalski’s Mutual Appreciation, this movie is purposely ugly in the vein of a low-rent documentary. Crudely designed headings appear on the screen, and the master of ceremonies awkwardly describes the proceedings. It’s hard to think of a better word to describe this story (and much of Bujalski’s filmography) than awkward. The set design and technology convincingly present the time period, and the programmers (including a nearly unrecognizable Wiley Wiggins) feel authentic. The challenge is finding an engaging story within this environment. Bujalski’s approach works great for 30 minutes, but extending it to a feature film is a challenge. There are plenty of silly touches, including the many cats hanging around the hotel. It’s the type of movie that’s going to charm a small group and alienate plenty of others. It’s hard to argue too strongly against either reaction, though mine drifts closer to the latter group. It’s interesting to watch Bujalski try something original, but it leads to an inconsistent experience.
2013 Film Review