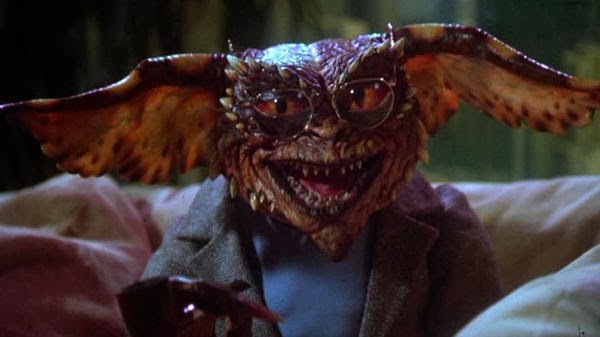 When Robert Picardo looks back on his career, I expect the highlight won’t be getting romanced by a Gremlin in a wedding dress. He joins Christopher Lee, John Glover, and returning stars Zach Galligan and Phoebe Cates for one of the most ridiculous sequels ever made. How did Gremlins 2 get a $50 million budget? It’s become a cult film, which makes it a good choice for this year’s Blind Spots Series. Joe Dante resisted the offers to return to the franchise, which made huge sums of money with its original film in 1984. When he changed his mind six years later, the movie world was different. Audiences didn’t have the same interest in Gizmo and the creatures that spawn from this Mogwai. Don’t let him have water! No eating after midnight! These are the basic rules to keep the nasty Gremlins from arriving. Once they start taking over the massive building, no one is safe from their mayhem. 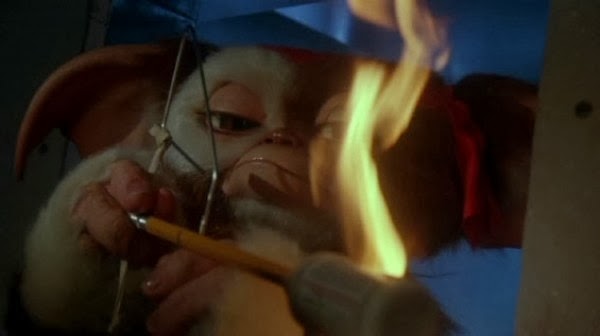 First of all, I have a confession to make: I’ve never seen the original Gremlins. It would have freaked me out as an eight-year-old, and I just didn’t get around to seeing it after that point. Even so, I’ve caught parts on TV and understand the basic premise. Produced on an $11 budget, it earned a huge box office yet was also criticized for stretching the limits of the PG rating. These objections played a role in the introduction of the PG-13 option, and its sequel received that rating. The creatures present an odd mix of cute aspects from a kids’ movie thrown into a blender with horror genre elements. It’s a tricky balance that found a large audience in 1984, but the sillier follow-up didn’t make a dent. Does it deserve more credit? There are numerous references to movies and pop culture, but that isn’t enough to carry a film. When the characters and plot are so thin, it becomes a total lark. In a sense, Dante tricked the studio and created a daring experiment with little chance to succeed.

The story mostly takes place at Clamp Enterprises, which bears more than a passing resemblance to the empire of Donald Trump. Billy Peltzer (Zach Galligan) works there as a designer, and his fiancée Katie (Phoebe Cates) is a tour guide. Clamp’s namesake is the arrogant Daniel Clamp (John Glover), who oversees everything and maintains a god-like status. His research department ends up with Gizmo, the kind Mogwai from the first movie. When Billy rescues Gizmo, it sets off a chain reaction that sends the entire office into chaos. If the Gremlins escape the building, they could spread into the city and be unstoppable. This description may hint at tense sequences or some thrills, but that’s hardly the case. Dante and Writer Charles S. Haas develop a limited plot but don’t really care about making it work. It’s just the framework to set up the mayhem. 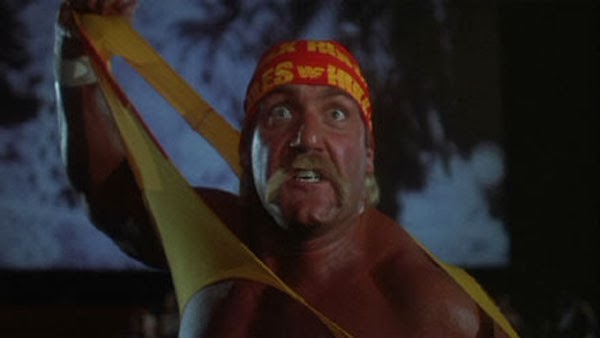 There are some clever gags that bring a laugh, including having Leonard Maltin present his negative review of the first movie and then get eaten by Gremlins. The most unique gag has the monsters taking over the movie theater and stopping the film. It takes an impassioned speech from the imposing Hulk Hogan to get the story on track and allow the movie to finish. The original video release also had an alternate version with the Gremlins taking over the VCR. John Wayne was the savior in that case. Like many of the film’s gags, they’re clever but pretty obvious. Dante makes everything so manic that it loses much of its edge. The violence is cartoonish and even has a Gremlin getting destroyed in a paper shredder. They’re still pretty grisly enemies, but the menace goes away pretty quickly. Gremlins are genetically modified into spiders and other different creatures, and one even becomes smart. Tony Randall voices the leader, and he brings some rare wit to that character.

Gremlins 2 lives in the world of Howard the Duck and Super Mario Bros. as a head-scratching major studio release. It’s slightly better than those train wrecks and has some charm, but it’s a pretty terrible movie. Galligan and Cates are stilted as the leads, and even the great Christopher Lee gets little to do as Dr. Catheter. His character name says all you need to know about this movie’s humor level. I can’t compare it directly to the original, but I expect that it slides pretty far down the scale. Dante followed up his Gremlins success with Explorers, which offered a ridiculous ending that included aliens obsessed with American television. His segment from Twilight Zone: The Movie was a creepy take on Warner Brothers cartoons, and those characters open up this film. He loves self-referential humor, but his storytelling skills leave something to be desired. Gremlins 2 pummels you with these in-jokes and doesn’t provide enough other elements to make it work. It’s an interesting mess with some fun scenes, but they aren’t enough to avoid inconsistent results.
Blind Spots Film Review