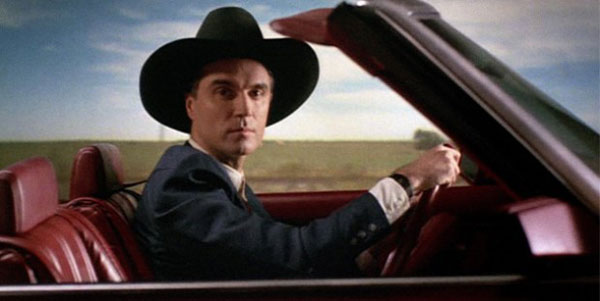 Last week, I joined host Todd Liebenow on the Forgotten Filmcast to discuss a gem that deserves more attention. Released in 1986, True Stories was directed by David Byrne at the height of his popularity. He’s known as the front man for The Talking Heads, but this isn’t just a vehicle for their music. Instead, it’s a charming look at a fictional Texas town. Virgil includes colorful individuals with their own quirks. This is hardly a nasty satire, however. Instead, Byrne takes a warm look at their odd behavior and appreciates the unique traits that make us human. He visits the local mall for an unconventional fashion show, hangs out with the hopeful romantic Louis (John Goodman), and shows what makes this community tick. The result is a mellow, engaging little film that has mostly disappeared. While The Talking Heads remain well-known, this movie has drifted into the background.

Byrne plays an unnamed narrator who drives into town in a red Chrysler Lebaron convertible. He presents the story like a documentary filmmaker who takes himself a bit too seriously. His reverence for the shopping mall and other basic aspects of life seems odd today. He never winks at the camera, and that’s the main reason the character works. Along with a likable performance from Goodman, the supporting cast includes Spalding Gray, Swoosie Kurtz, and Jo Harvey Allen in a scene-stealing performance as a woman who lies about everything. The slow pace gives us time to get to know these characters and understand how this town functions. The film is set up as a collection of interludes that could give it a meandering feeling, but that tone seems right for this material.

One of the best parts of True Stories is the music, which keeps it from becoming too dry. The standout is “Wild Wild Life”, performed at a karaoke club by a group of people dressed as rock icons. The cast includes several music stars, most notably Pop Staples as a voodoo practitioner. Goodman even gets in on the action and sings “People Like Us” during the finale. The mix of humor, mellow charm, and music works better than you might expect. You can listen to this episode of the Forgotten Filmcast through this link. Todd does an excellent job and has covered other gems like Condorman and Streets of Fire in previous shows. I had a great time talking about this film and highly recommend adding it to your weekly listening.
podcast