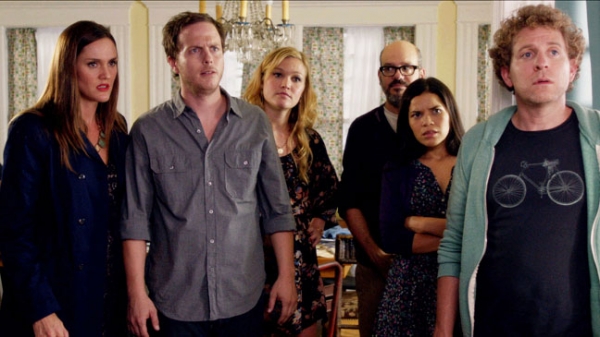 Disaster films often take a serious look at survivors coping with a devastating environment. Movies like The Road, The Quiet Earth, and many others show people looking for meaning in life after society has crumbled. Taking a much-smaller approach is Todd Berger’s It’s a Disaster, which appeared at film festivals in 2012 and received a limited theatrical run last month. Familiar faces like David Cross, Julia Stiles, and others arrive for a pretty mundane couples’ brunch. There’s some interpersonal drama, particularly with a couple announcing an impending divorce. That pales in comparison to the impending doom that’s lurking just outside their walls. Signs continue to appear about issues beyond that house. The power goes out, phone lines are down, and television is gone. What is happening? Even when the danger is clear, the characters are still more focused on their own drama. Berger takes a light approach to the disaster and uses it to set up the comedy. It’s a small-scale production but has some charm if you don’t mind the self-involved characters.

Cross stars as Glen, the newbie who’s just started dating Tracy (Julia Stiles). This is his first introduction to the other long-term couples, and each pair has its own peculiar qualities. Emma (Erinn Hayes) and Pete (Blaise Miller) host the gathering and are heading for divorce. Hedy (America Ferrara) and Shane (Jeff Grace) are one of those couples that’s been engaged for many years. The goofballs are Lexi (Rachel Boston) and Buck (Kevin M. Brennan), who play awful music and seem ready jump in bed with anyone. The early scenes are awkward and push the quirkiness a bit too much. It’s hard to be interested in anyone besides Glen and Tracy, and this is going to be a long lunch. Thankfully, the disaster premise arrives at just the right time and knocks everyone out of their comfort zones. The entire film takes place at one location, so it’s up to the actors to sell the dire premise. Berger writes in plenty of jokes, but they’ll only land if we’re ready to stick with the characters. Cross does the best work as a regular guy who’s mystified by the others’ goofy behavior. His comic timing is excellent and lands most of the big laughs. He might seem like an odd choice to have a romance with Julia Stiles, but you can see it. Glen’s outsider status and dry wit is a nice contrast to the more dramatic behavior of the others inside the house.

My wife and I are certain that we'd be the first people to go after the apocalypse. However, I think we'd last longer than this group. Berger has fun playing with the conventions of the disaster movie. Shane has seen a lot of movies and is most concerned with the forces behind the bombings. While the others are still playing out the personal drama, he’s solely focused on the situation. Of course, he’s also crazily paranoid and has watched too many conspiracy movies. One highlight takes an obvious shot at telemarketers. The phones and electricity are out, but even that can’t stop the power of offshore call centers. The Manila phone operators’ reaction to learning about the attacks is classic. It’s this type of moment that keeps the story engaging once the chaos begins. Another fun scene has Tracy icily staring down Jenny and Gordon, the always-late attendees. She gets the last word about their tardiness while they die on the porch. Stiles sells the cold, yet understandable approach to friends who just can’t get their act together. The party eventually devolves into singing, dancing, and other mayhem as everyone loses their nerve. America Ferrara’s eating and drinking extravaganza is a fun change of pace for the talented actress. 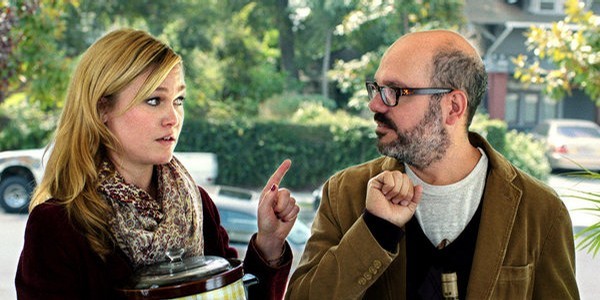 The thin plotting for It’s a Disaster works because it’s a breezy experience. Clocking in just below 90 minutes, it doesn’t overstay its welcome. There is an unfortunate third-act twist involving Glen that falls flat. The shift doesn’t fit with everything we’ve learned about his character and feels like a gimmick. It’s designed solely to set up the final gag and brings a strangeness to the ending. The last shot is amusing and nearly saves this move, but it still rings false. Cross sells the craziness and is the right guy for that material. There’s a way to use the same device without giving such an odd change to a likable character. Even with this choice, Berger does plenty of things right with this low-budget production. It’s the type of movie that charms film festival crowds but rarely makes a dent in a limited theatrical run. I’d suggest checking it out through video on demand or in a future home release. The change of pace from the normal disaster movie is enjoyable. There are few pretensions or grandeur, and the actors have fun playing in this small-scale environment.
2012 Film Review