Survivor Caramoan, "Cut Off the Head of the Snake" 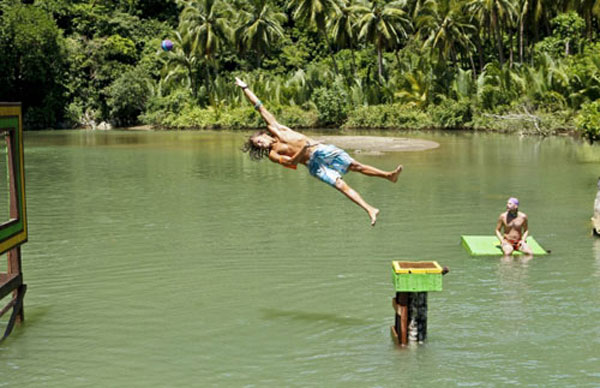 There are many Survivor episodes where the outcome is predictable, and it’s fairly easy to describe what just happened. Those are the norm because players rarely stray from the safest move. Living in a different universe are the outliers that leave even the most able-minded fan yelling “what just happened?” This week is one of those wonderful episodes. Malcolm overplays his hand and seems destined to go home, but a desperate play to get Reynold’s idol keeps him safe. What he doesn’t know is that he isn’t getting any votes. Worried about her own security, Andrea leads the charge for a safer plan and gets the majority to take out Michael. They remove a less-threatening fan, but the shift ultimately saves her. The amazing highlight comes right after the vote, when Reynold stands up with intentions to play his idol. All it takes is a few sweet words from Malcolm to inspire him to pass the idol to his buddy. Even if Reynold keeps it for himself, it’s a wasted play because Michael is the target. The surprise is that he would jeopardize his success to save Malcolm.

From what the editors reveal at Tribal Council, it takes little convincing to change Reynold’s mind. It appears to be a spontaneous move by Malcolm after being spooked by Phillip’s words. This week’s excitement comes from watching so many players actively playing the game. Even the dim-witted Eddie takes a shot and tries to align with Andrea. It certainly doesn’t hurt for him that she’s cute. Inadvertently, Eddie’s bumbling chat right before Tribal Council gives her the information that changes their plans. Earlier, he awkwardly flirts with Andrea while claiming that he’s doing it “indirectly”. Oh Eddie. It’s possible that their connection might save him for a few more weeks, especially with Reynold losing his idol. The favorites are still running the show, particularly the “new Dawn” who keeps getting everyone to provide her with info. Barring the serious meltdowns promised next week, she could make the end. The question is whether it may come back to haunt her. Andrea’s in the hot seat in the dominant alliance because she’s playing so hard. That puts her in a more tenuous position than Cochran and even silent partners like Brenda and Erik. 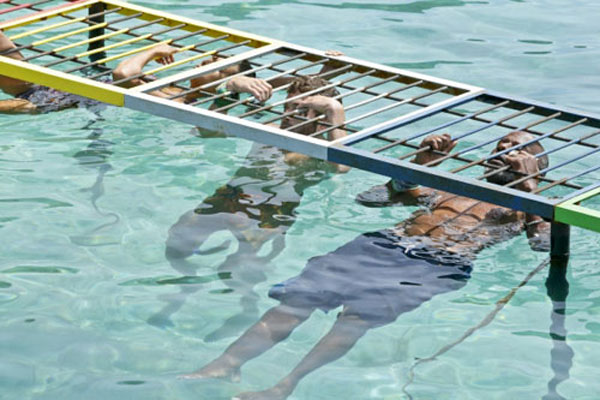 The reward challenge is like a hockey shootout, and the goalies this time have the same chances as Martin Brodeur. Malcolm and Michael take turns flailing away as the shooters throw the ball into the net. Even Cochran scores a goal and does a dance right by Jeff Probst. An unseen schoolyard pick leaves Sherri as the odd person out. It’s too bad they don’t show these selections, which would have been interesting. There is plenty of footage of Phillip rambling about his silly alliance and the Redemption Island season. Many Survivor fans would prefer to forget about that installment and his constant references to it. The all-male team of Reynold, Eddie, Michael, Cochran, and Erik win and get the chance to rappel down a waterfall for a picnic. They have a “bro-down” and talk about how girls are icky and deceitful. Thankfully, Cochran isn’t swayed by the silliness from Reynold. His description of the “masculine tomfoolery” is perfect, and he seems amazed the “numbskulls” have invited him to join the cool group. Erik remains silent and may be gliding right to the finish.

Leading into the immunity challenge, it seems like Malcolm needs the win. The players must float in the water beneath a grated steel barrier as the tide rises. The last contestant to remain wins immunity, and it comes down to Brenda and Andrea. The aptly titled “Serenity” wins yet still doesn’t get a confessional. Will they even give her an exit interview? Brenda is having a great time and smiling, but that’s about all we know. She has voted with the majority since the merge, so she’s being considered as an ally by the dominant group. Like Cochran last week, the tribe is thrilled by her win. The question is how to ensure that a big threat goes home. No one knows about Malcolm’s idol, and he doesn’t recognize the danger until Tribal Council. He actually votes for Reynold, which is confusing even if he’s ready to turn on his ally. It will be interesting to see what happens with their relationship next week. 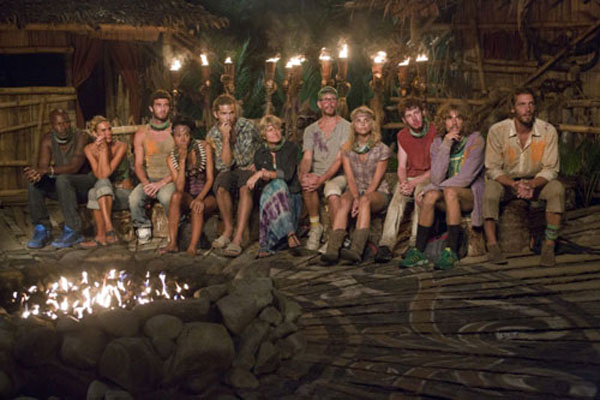 Along with providing great drama, this unpredictable episode produces intriguing questions. Can Reynold find a third idol? If not, is there any chance for him to stay afloat? Malcolm could claim he voted for Reynold because he’s with the favorites, but his move to grab the idol negates that claim. He’s shown an ability to rebound, and he still has the idol. That device gives him the chance to pull a blindside and stay alive. The question is whether that success will be enough to get him to the end. Losing a desperate ally like Michael who’s a guaranteed vote is going to be tough. His best chance is to hang around long enough and try to recruit Erik and Brenda to take out the leaders. Cochran remains the favorite to win it all, and Phillip’s antics make him a prime candidate to return to the Final Tribal Council. Even so, it feels like anything could happen in the rest of this season. That unpredictability has turned around this contest and could deliver a stunning finish.
Survivor Survivor Caramoan TV Review