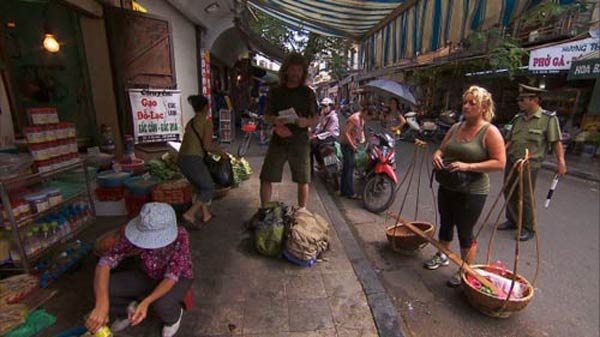 Looking at the best episodes in Amazing Race history, many take place in crowded cities that knock racers out of their comfort zones. Dropping teams into a foreign culture and forcing them to maneuver adds an extra layer to the challenge. This week, the remaining eight teams head to Hanoi and clearly feel the pressure of the unknown environment. With the added weight of the impending Double U-Turn on their shoulders, everyone brings their best effort to avoid last place. Well, almost everyone. Vietnam isn’t on par with India in terms of culture shock, but there are still enough obstacles to create an entertaining leg. It may not be one of the greatest episodes, but it’s easily the best of this season. The stakes feel higher as the number of teams gets smaller. After David and Connor choose to exit the stage, removing two teams seems possible. Even when Chuck and Wynona are spared, it doesn’t lessen the excitement of this fast-paced episode. She’s a weaker physical player, but the sour attitude is the real problem. She grumbles about him for the entire leg and doesn’t recognize that he’s been working tirelessly to compensate for her shortcomings. If they’re not on the same page, Chuck and Wynona are doomed very soon.

Teams depart Bali and fly to Hanoi, and David realizes they must stop after talking with his orthopedic surgeon. They travel to Vietnam but immediately locate Phil for an emotional departure. David and Connor are likable and strong, so it’s too bad that fate dealt them a rough hand. Pam and Winnie join Max and Katie on an early flight, but they miss the operating hours for the Roadblock by a short window. Everyone catches up and starts on equal footing the next day. There’s plenty of talk about the alliance and putting the target on the roller derby moms and Joey and Meghan. John’s negative impact on the game remains, and a few players take a shot at his idiotic choice to keep the Express Pass. The editors are sparing him no mercy. The problems for his alliance show the pratfalls of separating from the main group on this show. It’s better to just play it straight and be nice to everyone when U-Turns come into play. The Roadblock involves memorizing some phrases from the performance of a song depicting the wonders of socialism. No one has a huge problem, and everyone ventures on for a special blessing as they jump through a small course. It is one of those cultural tasks that is easy to complete, but Chuck and Wynona still have issues. They repeatedly try it and don’t focus on why they’re failing. It’s pretty early for killer fatigue, but it’s really set in for the Alabama couple this week. 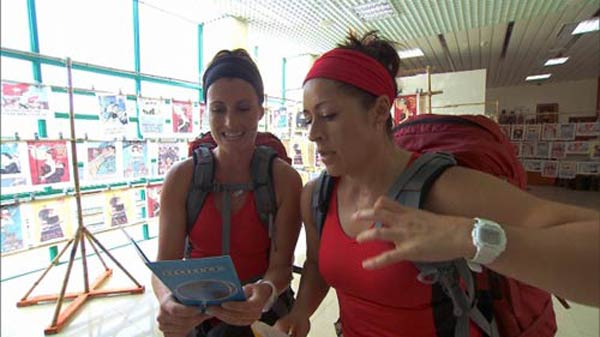 The big showdown comes at the Detour since the U-Turn chance awaits them after finishing. Pam and Winnie arrive first and maintain their lead right up to the end. Despite their navigation struggles several weeks ago, they’re looking like front runners at this point. They stick with the plan and pin the U-Turn on Meghan and Joey, who have a charming sad face in their picture. The You Tube hosts are the second team to complete the Detour, but they’re forced to choose the other option. They’re frustrated but thankfully avoid the frequent nasty behavior from victims of this tactic. Megan and Joey make the perfect choice for the second U-Turn and pick a weak team that is definitely behind them. Chuck and Wynona are unlikely to blow through both Detour options in time to pass them. It’s rare to see teams make the right pick in this situation and is a refreshing change of pace. They fall back to sixth place but prove their mettle by handling the adversity well.

The Detour options are “Make Your Move” and “Make Your Meal”, and both are complicated endeavors. The first requires players to set up a Chinese chess board using human pieces. If they figure out the pattern, it’s simple and the better choice. However, it could lead to confusion if they miss the general idea. The other option could take longer but is straightforward. Teams must buy a large amount of ingredients from a local market and cook a popular Vietnamese dish. The challenge is purchasing the right quantity from sellers who don’t speak their language. Max and Katie are lucky enough to locate a “Fern” (a local who speaks English and is willing to help) and move into second place. Chuck and Wynona aren’t so lucky and forget the important step of grabbing some chickens at the start. He’s running off in every direction, and she’s sitting back and grumbling to the camera about him. In fact, they’re still doing this Detour when Joey and Meghan arrive there from the U-Turn. Chuck adds to the silliness by saying “Muchas Gracias” after receiving their clue. Poor guy. 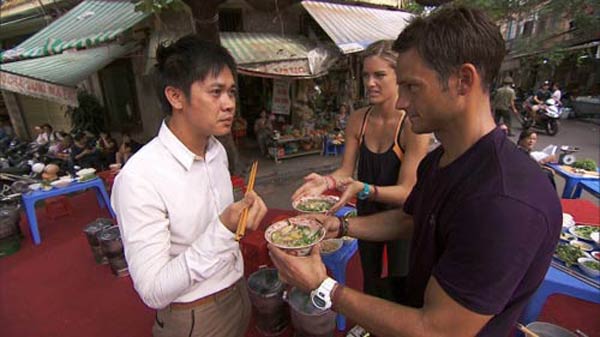 With David and Connor out, it’s hard to say who will make the final leg. The most likely trio is Pam and Winnie, Max and Katie, and Anthony and Bates, but each team has a flaw that could doom them at any time. The hockey players repeatedly do well at challenges and arrive behind other teams at the next task. Either they have a slow-moving camera guy or are really bad at navigation. They end up fifth this week and must have gone through quite an ordeal based on their relief. Although the Double U-Turn doesn’t kick out anyone, it raises the drama and delivers a very good episode. The energetic pace and intense competition are really kicking into gear and delivering one of the better recent seasons.
Amazing Race TV Review