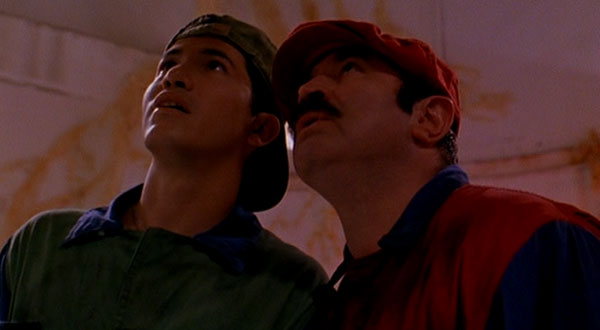 It’s difficult to explain just how big the Nintendo Entertainment System was in the late ‘80s and early ‘90s. This eight-bit system spawned a renaissance in home video games, and the industry never looked back. One of the pivotal reasons for this success was Super Mario Bros., which was part of the base set. The deceptively simple game was basic enough to draw in casual gamers but still entertaining for hardcore players. The character of Mario originated in 1981 as the star of Donkey Kong, but his popularity reached new heights with this game and the series. Along with his brother Luigi, the Italian plumber became a symbol of Nintendo and the entire business. In 1989, the success even spawned the syndicated cartoon The Super Mario Bros. Super Show! It was only a matter of time before Hollywood took notice and tried to grab a piece of the action.

The challenge in adapting a video game is staying true to the source material while finding a way to translate it to the big screen. Super Mario Bros. seemed tailor made to deliver an entertaining adventure film for the whole family. Although it’s rated PG, the 1993 adaptation is hardly a light kids movie. It’s a strange hybrid between an outlandish fantasy and a nastier black comedy. When characters utter phrases like “remember, trust the fungus”, that’s hardly a recipe for mainstream success. Considering the offbeat approach that directors Annabel Jankel and Rocky Morton (D.O.A.) used for this material, the $42 million budget is shocking. For the sake of comparison, that number is almost identical to the cost for The Fugitive. Andrew Davis got a bit more for his money with that Harrison Ford film. Even the game’s most devoted fans will likely have serious issues with this ridiculous movie. Bob Hoskins and John Leguizamo star as brothers Mario and Luigi, who are struggling to keep their plumbing business afloat. They drive a worn-down van and bicker constantly about their misfortunes. When Luigi meets an attractive NYU student named Daisy (Samantha Mathis), he inadvertently gets them involved in a high-stakes adventure. She’s actually a Princess from an alternate dimension ruled by the vicious King Koopa (Dennis Hopper). Who knew? The dinosaurs left our world after a meteor crashed into Earth 65 million years ago. They evolved into lizard-human hybrids that live in a strange version of New York City. Koopa wields his power with a “devo” machine that turns intelligent beings into giant mindless lizards. Daisy is the key factor in his plans to merge the universes and gain control. The Mario brothers are her only hope and the last obstacle to Koopa’s impending dominance. 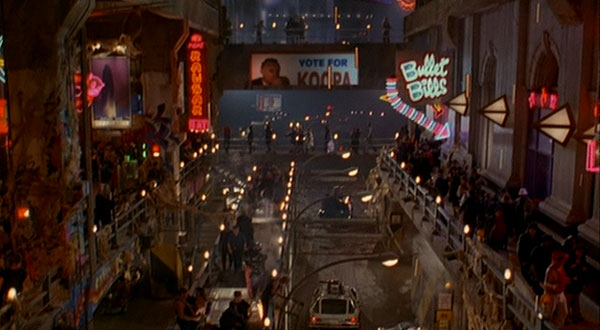 Narrator Dan Castellaneta explains the silly premise and sets the stage for what could be a promising adventure. The budget is definitely on the screen in the over-the-top costumes and lavish sets. Rarely has so much money been spent on such an ugly movie. It’s clear from the first half hour that this is a train wreck, and it only gets worse during the second hour. It’s hard to believe that a studio allowed its release, especially on such a wide scale. While Mario and Luigi do save a princess from a lizard king, the similarities between the game and this adaptation are pretty thin. There’s a cult favorite hidden in this mess somewhere, but it’s knocked down by terrible dialogue and over-the-top performances. Everything is so manic that there’s little chance to breathe within the chaos. The frenetic pace becomes mind-numbing and pounds you into submission by the end of the first hour. 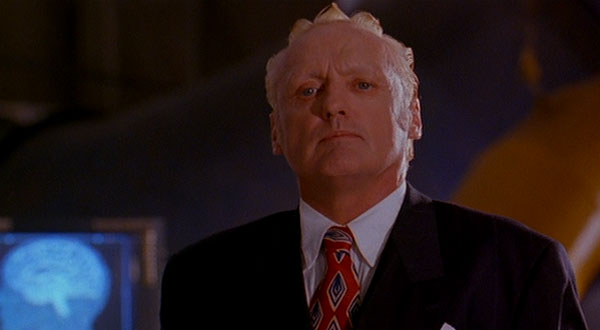 It's sad to watch talented actors struggle with such awkward material, especially Hoskins. He's called it the worst job he's ever had, which says a lot from a guy who was in Son of the Mask. It's clear that the actors don't believe in the script and are compensating but going really big. This is no challenge for Dennis Hopper, who can play this character in his sleep. Like his later role in Waterworld, King Koopa allows him to chew all the scenery and leave nothing in his wake. Hopper's ridiculous haircut make it impossible to take him seriously, especially when he's addressing tall lizard men. Looking at the younger cast, Leguizamo and Mathis were both rising stars at the time and gave excellent performances in other films. They play it straight and try their best, but that approach just makes their acting look worse. There's no way to win in this situation. Supporting players like Richard Edson (Spike) and Fisher Stevens (Iggy) seem to understand how goofy this movie is and respond with oddball performances. 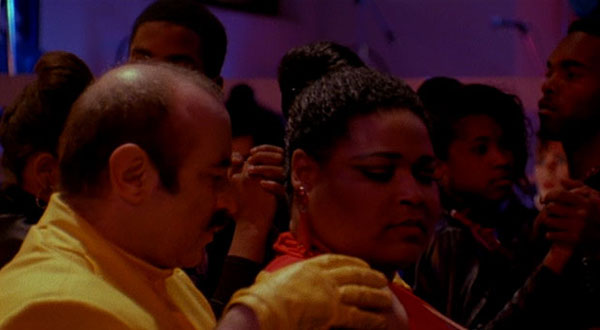 Although it falls flat as a complete film, there are plenty of ridiculous scenes in Super Mario Bros. that are worth mentioning. The story's MacGuffin is a necklace containing a meteorite fragment that can merge the worlds. The plumbers enter the alternate universe with this device but quickly lose it to Bertha (Francesca P. Roberts), a woman in a flashy red outfit with the ability to jump long distances. When Mario tries to retrieve it, he engages in a sensual dance with her that feels cut from a different movie. An even more outlandish dance involves Luigi's attempts to escape from an elevator full of giant lizard men. Apparently, these guys really enjoy swaying to elevator music, so he uses that distraction to make the escape. This type of absurd moment is common throughout the movie. One of the main action scenes involves a very small bomb that's impossible to take seriously. While I realize this connects to the video games, it doesn't work in this world. This exemplifies the problems with this adaptation. Even when it tries to use elements from the games, that tone doesn't fit with this mishmash of styles. 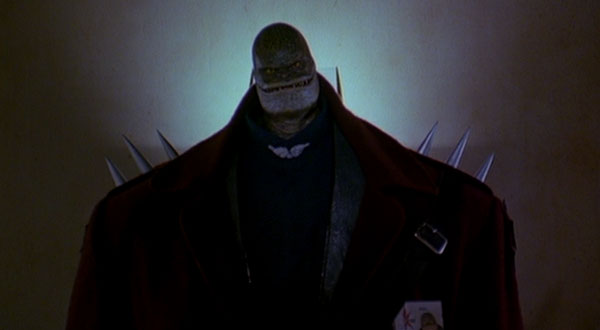 Annabel Jankel and Rocky Morton are a husband-and-wife directing team that tried to craft a darker adaptation of a family game. Koopa's de-evolution machine is creepy for a big-budget movie aimed towards kids. The previous king has been turned into an icky fungus, and this alternate dimension is a hellish environment. Who's the target audience? That is the pressing question that wasn't considered enough during the production. Super Mario Bros. doesn't fit within any particular segment and ends up failing across the board. While certain moments are fun because they're so odd, it falls short as a complete movie. The Back to the Future-style conclusion sets the stage for a sequel, but there was little chance after its box-office failure. Given the current penchant for remakes, there's always a chance we'll see Mario and Luigi again. It wouldn't take much to outshine this bizarre disaster.