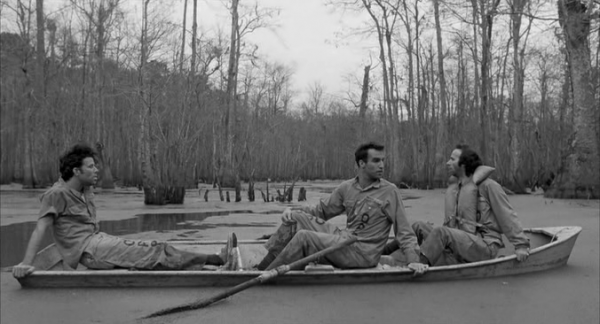 Jim Jarmusch exudes a certain level of cool that differs from the standard definition of the term. It’s an ethereal look at the world that brings an original perspective to each of his films. During his early days, his allies were artists like Tom Waits and John Lurie who brought a different sensibility than your standard dramatic actors. These guys can play interesting characters that seem realistic because they aren’t that far removed from their real personas. Both appeared in 1986’s Down by Law, a story of three men who find themselves in a Louisiana prison. None are serious criminals, but they all have bad luck and don’t choose their friends wisely. They have very different personalities but bond over a similar disillusionment with society.

Waits plays Zack, a former DJ who’s just been dumped by his girlfriend (Ellen Barkin). He takes a job to drive a car for a friend but doesn’t know of his incriminating cargo. Lurie’s Jack is a pimp who isn’t necessarily a good guy, but he doesn’t deserve the rap as a child-sex operator. The third cellmate is the eccentric Italian tourist Bob (Roberto Benigni), who knows little English. These guys have hit the bottom rung of life but find a way to bond within the cramped cell. This isn’t your typical prison movie, and Jarmusch is more interested in showing their quirks than delivering serious drama. This brings a light feeling to the movie that differs greatly from the environment. It’s a tricky balance between showing their unfortunate state and presenting characters we’ll enjoy spending time with in that spot.

Jarmusch uses black-and-white cinematography to create a timeless feel that retains a modern tone to this day. The striking beauty of New Orleans opens the story and is shot wonderfully by Robby Müller (Dead Man). Even the spare rooms of the prison look excellent on this Criterion Blu-ray release. For a movie with only about a $1 million budget, it feels bigger than the intimate story that it presents. When the trio escapes from prison, there are no grand chases or clever deceptions to break out. Instead, Jarmusch takes his time as they slowly travel through the muddy wilderness. We know that the law is on their tails, but it never feels like they’re in any true danger. This is just another stage in their ongoing journey to the next destination.

Waits and Lurie do a good job, but they’re outshined by a silly performance from Roberto Benigni. His career peaked with Life is Beautiful, and he’s become sort of a joke since that success. People still remember his exuberant response to winning the Oscar and can’t take him seriously. This is unfortunate because his comic talent can be effective if used correctly. His style is perfect for Jarmusch and contrasts nicely with his laid-back fellow actors. Roberto’s attempts to learn English in Down by Law are charming and work because he’s so innocent. He injects some life into Zack and Jack and keeps them from getting too dour. His ultimate destination seems fitting for this the well-meaning guy.

This Criterion Blu-ray includes plenty of background information about this film from Jarmusch and other sources. There’s no commentary, but the 73-minute audio interview with the director plays a similar role. Since it isn’t tied to specific scenes, Jarmusch doesn’t get drawn into giving plot summary. There’s also a segment where he responds to viewer questions with his typical dry wit. The lack of video might be difficult for some, but it contains good details. One video feature is a 22-minute interview with Müller, who isn’t as engaged as the director but provides a different perspective. Another cool extra is the music video of Tom Waits covering Cole Porter’s “It’s All Right with Me”. Jarmusch provides some comments on making the video, which was for the Red, Hot, & Blue compilation. This impressive release also contains 16 outtakes, a look at the 1986 Cannes Film Festival, and production stills.

Jarmusch has always found interesting ways to combine genres without making it seem obvious. Down by Law is only his third feature but already shows his confidence in crafting a unique style. The opening scenes with Waits and Ellen Barkin are straight out of a John Cassavetes film. She screams at him to make something of himself while he shrinks into the corner and drifts away. The story begins as a gritty drama, transitions into a prison movie, and ends up as a road film. Jarmusch injects clever jokes into the generally serious tale. When the three guys arrive at an abandoned shed while fleeing the law, they discover that its furniture looks exactly the same as their jail cell. It’s this kind of understated touch that makes this a lot more than just another quirky indie film.
PopMatters