The Champion of Robotic Acting: Arnold Schwarzenegger in The Terminator (1984) 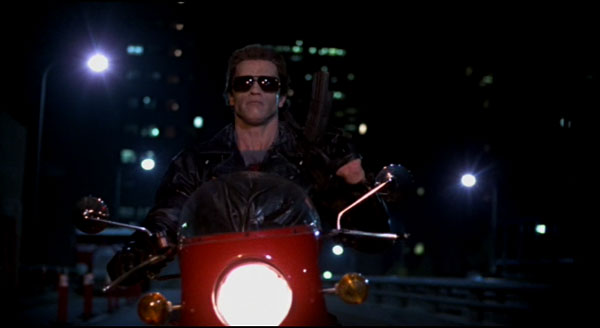 Arnold Schwarzenegger is known today for his distinctive accent and robotic speaking style. He's a star throughout the world for blockbusters like True Lies, Terminator 2: Judgment Day, and Total Recall. Let's journey back to 1984, when he was a bodybuilder with just a few roles under his belt. He had starred in Conan the Barbarian two years earlier, but that performance didn't seem to promise major stardom. James Cameron was an up-and-coming director looking to make his name, and a $6 million sci-fi thriller gave him that chance. After considering Lance Henriksen, OJ Simpson, and others, he settled on Schwarzenegger for the title role. Expectations were limited for The Terminator, but it spawned a mega franchise and a huge career for a future star (and California governor). Lines like "I'll be back" crossed in the pop-culture lexicon, and three sequels and a TV series expanded the story. Today, I'm going to explore what made Schwarzenegger the right choice to play the Terminator and delve into Cameron's effective use of the actor in the movie. 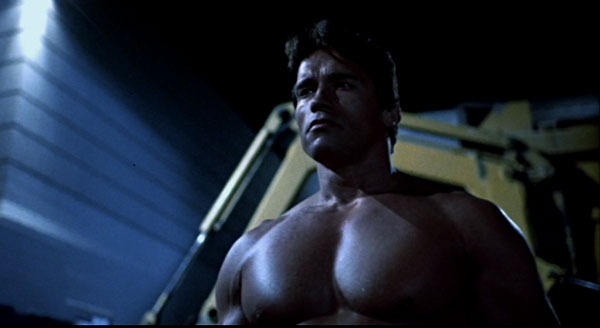 The Terminator's first appearance is an iconic moment that perfectly introduces the efficient killer. While his reason for being there is obvious to us now, it's pretty mysterious for a first-time viewer. He arrives naked and walks with clear purpose towards three punks. While they joke about seeing a giant naked guy strolling by with no shame, his goal is clear. "Your clothes, I need them now." When Bill Paxton's punk leader refuses, it's only seconds before the Terminator has killed one and injured the others. There's no joy in this brutal violence; it's simply the easiest way to accomplish its goal. With just a few lines, Schwarzenegger makes it clear that he's a force to be reckoned with and may be unstoppable. He looks like a man, but there's something different that we can't totally place. Since the film's prologue showed us the robots of the future, we could make the leap that he's affiliated with those machines. Cameron masterfully conveys plot during the precise early scenes. He wastes little time with introducing the Terminator, his human opponent Kyle Reese (Michael Biehn), and Sarah Connor (Linda Hamilton) and doesn't slow down the pace. 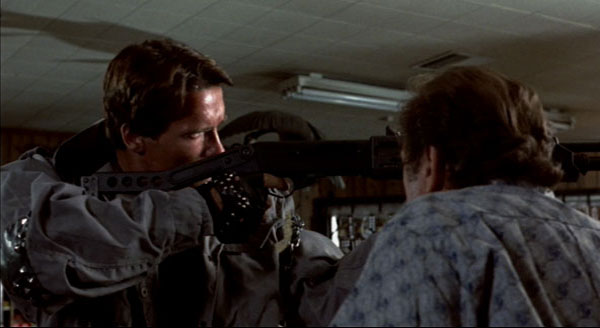 The next few Terminator scenes are quick and show him preparing to take down each Sarah Connor. He takes a memorable trip to a gun shop and starts buying all the latest equipment. Unlike the "learning computer" of the sequel, there's no joy in handling all the firepower. The store owner is killed without a second thought, and the Terminator uses the same approach to take out the wrong Sarah Connor. Schwarzenegger isn't a very expressive actor, and he was especially flat during his early career. He shows no personality during these killings, and that makes him perfect for the role. Few actors could avoid putting their own spin on the robot. Even Robert Patrick's chilling Terminator in the sequel lacks this completely emotionless use of destruction. Schwarzenegger's imposing physique also plays a role in creating the menace.  While it's interesting to consider how Henriksen would have played this role, it would have been a much different movie. 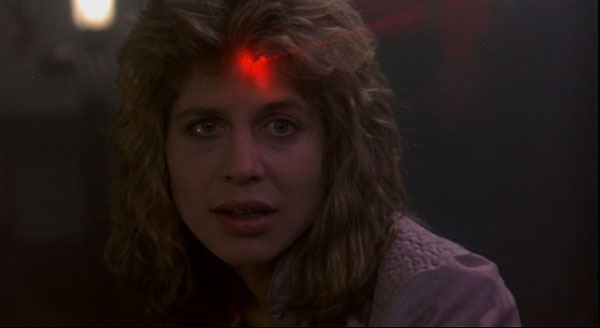 While the first half-hour is mostly set-up, the story really kicks into gear once Reese, Sarah, and the Terminator meet in one place. This happens at the Tech Noir night club, and it's one of Cameron's most effective sequences. He uses slow motion to indicate the impending danger for Sarah that's only a few feet away. When Reese's shotgun blasts end the silence, it's a startling effect that leads to a massive shootout. The Terminator will kill any bystanders who get in his way, and some unsuspecting club goers aren't lucky souls. The scene lasts about three minutes and uses the ominous score, club music, and gun shots to great effect. The Terminator survives a massive amount of damage, so it's clear that he isn't just a really strong man. Michael Biehn and Linda Hamilton scramble messily to get away, while Schwarzenegger moves with precise grace. The contrast between their desperate attempts to survive and his focused acts is stunning. This fight also begins the Terminator's degeneration from man to robot. With each successive battle, he looks more like a machine. 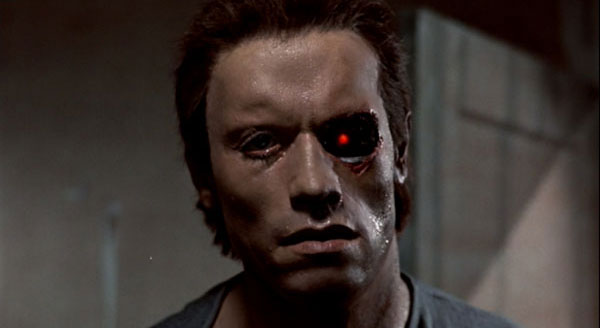 While Sarah and Reese flee the cops and the Terminator, Cameron finds a clever way to present loads of exposition without slowing down the movie. He gives Biehn a serious amount of dialogue to explain both the future and the machine's goals. This also leads to the famous lines about how the Terminator "will not stop, ever, until you are dead!" Instead of wasting time presenting all of this information about the robot, Cameron deftly inserts this material into an action scene. There are few examples in any movie that handle this amount of exposition so well. Following the chase, Sarah and Reese appear to be safe at the police station. Meanwhile, the Terminator is regrouping and doing some surgery on his hand and eye. Looking in the mirror, he barely looks like Schwarzenegger anymore. The make-up is starting to take over, though a few key moments still remain. The "I'll be back" scene with the police desk attendant seems like a disappointment before we get the punchline of the car driving into the station. Its effect is only enhanced by the action that follows. Even 30 cops have little chance against the determined killer who senses he's close to finishing his mission. Sarah and Reese avoid him once again, but it's clear the vice is tightening on them. 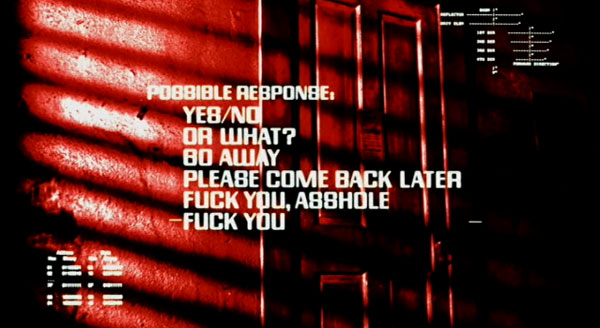 We're getting close to the explosive finale, but Cameron finds a way to insert the movie's biggest joke into the prelude. While the Terminator sits in the hotel and ponders its next move, the attendant shows up outside the door to complain about the smell. Cameron gives a quick glimpse at the robot's options for his next line. It's like a rudimentary video game where you pick the right words to say and determine the computer character's reaction. The Terminator settles on "fuck you, asshole" among options like "please come back later" and "go away". Schwarzenegger reads this line with no inflection, and that makes it a lot funnier. Cameron would take this one moment and expand it greatly in the sequel. He recognizes the inherent silliness in the actor's approach, which he also uses in True Lies. 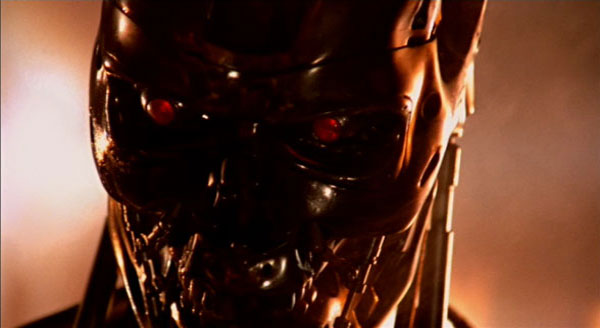 Schwarzenegger exits at the 90-minute mark and lets Stan Winston's amazing creation take over. He only has 16 lines in the movie, yet it feels like he's involved in nearly every scene. Even when Reese and Sarah take center stage, they're often talking about the Terminator. Biehn and Hamilton do excellent work and are superior actors, but it's Schwarzenegger who's the prime attraction. Cameron understands how to use his robotic acting and makes him an intriguing villain. While a few of the effects might seem dated, The Terminator has lost none of its power 28 years later. It's a fast-paced, white-knuckle thriller that doesn't overstay its welcome and delivers a serious jolt. While the sequels (particularly Terminator 2) would have their moments, none can match the success of the original. Much of the achievement comes from casting Schwarzenegger as the machine. I wouldn't call him a good actor, but his set of skills is perfectly matched with this iconic character.
Film Review