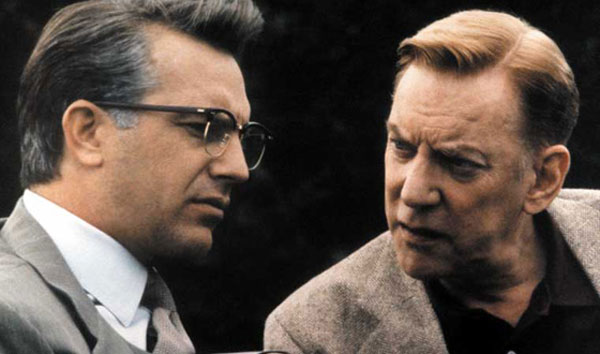 Donald Sutherland has appeared in well over 100 films during his nearly 50-year career on the big screen. He’s known for leading roles in MASH, Invasion of the Body Snatchers, Ordinary People, and many more films. During the more recent decades, Sutherland appears more frequently in smaller parts, but he rarely gives an unconvincing performance. Inspired by his stoic role in this week’s marathon entry Klute, I’ve decided to list five of his better supporting performances. For an actor with this many appearances, it’s impossible to truly call these his best roles. I haven’t seen a good portion of the smaller movies from his career, so I don’t have a complete perspective. Even so, I believe each of these characters makes good use of Sutherland’s imposing screen presence. Let’s take a look at the picks! 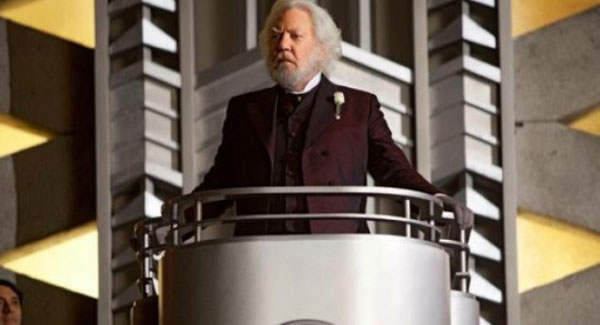 5. President Snow, The Hunger Games (2012)
Gary Ross wisely expanded the villainous role of President Snow for the adaptation of the amazing popular fantasy novel. Sutherland doesn’t waste his limited scenes and brings menace without saying a word. During the film’s closing moments, the look on his face clearly reveals that Katniss is in for a world of hurt. Few actors can deliver this type of nastiness by merely showing up on the screen. The casting of Sutherland was one of the best moves for this breakout hit, and his role will only expand in the upcoming sequels. 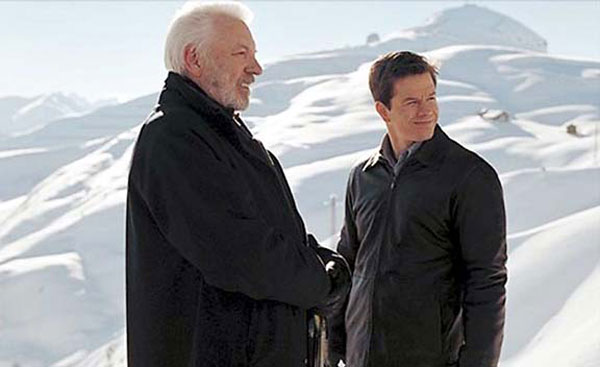 4. John Bridger, The Italian Job (2003)
The 2003 remake of the ‘60s British heist caper The Italian Job provides solid entertainment but is generally forgettable. An exception is Sutherland’s small part as safe cracker John Bridger, who joins Mark Wahlberg’s Charlie Croker for one last job. His character is mostly just a plot device to reveal the movie’s villain, but Sutherland brings an interesting depth to the part. His presence is sorely missed when a surprisingly flat Wahlberg takes the reins. The fact that I even remember Sutherland’s part nine years after seeing the movie is a testament to his convincing performance. 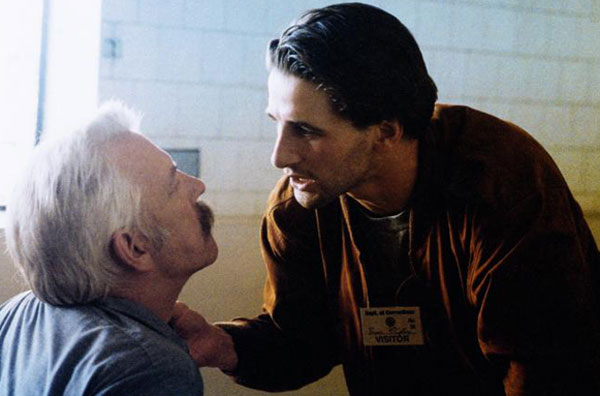 3. Ronald Bartel, Backdraft (1991)
Sutherland has another limited part in Ron Howard’s action drama about firefighters, but he makes it count. Few actors play crazy as well as him, and the role as pyromaniac Ronald Bartel offers some great scenery-chewing opportunities. The character basically plays the Hannibal Lector part from Silence of the Lambs and gives William Baldwin’s Brian McCaffrey essential information. He only appears for a few scenes, but Sutherland stands out by making Bartell so eerily creepy.

2. Michael, Panic (2000)
This is the most significant role on the list in terms of screen time, and it's one of Sutherland’s most effective recent roles. He plays the father of William H. Macy’s Alex in a family of killers. The son wants to escape the business, but Michael isn’t going to make it an easy exit. This debut feature from TV Producer Henry Bromell (Homeland) hits some obvious notes, but it works because of the performances. Sutherland underplays his role as the cruel patriarch, which makes the ways that he manipulates his son even more chilling. 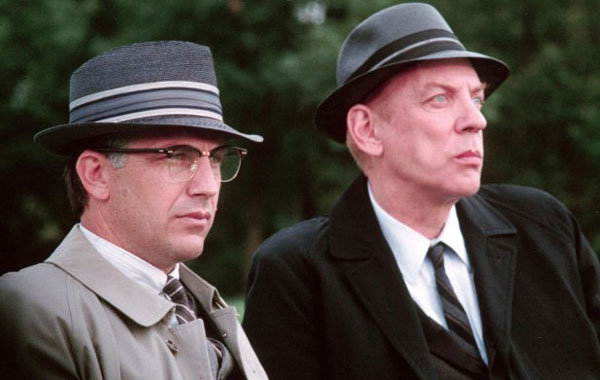 1. X, JFK (1991)
Oliver Stone’s highly ambitious look at possible conspiracies around the Kennedy assassination includes a remarkable cast of big-name actors. Jack Lemon, Gary Oldman, Joe Pesci, Ed Asner, Sissy Spacek, and Walter Matthau are just a small portion of the talent involved in this excellent film. Arguably the best sequence involves the appearance of Sutherland as X. He lays out a massive government conspiracy that includes President Johnson, the CIA, the military, and other powerful entities. Stone is at the height of his power during this sequence and energetically pushes the impact of these findings. Even you disagree with the evidence on display, it works in the context of the film. One of the main reasons is Sutherland’s ability to give a convincing delivery of this material and not make it sound crazy. That is no easy feat.

I'd love to hear your thoughts about this list in the comments section. Do you think the warden in Lock Up should in here? Maybe his role as General McClintock in Outbreak? You should also check out the archive of past Top 5 Lists if you've missed them.
Top 5 Lists