It's hard not to love a great movie car chase, and there have been many thrilling scenes over the years. Recent examples have raised the stakes and used better effects, but it's hard to top the intense pursuits in Bullitt and The French Connection. Those sequences placed us directly in the car and sent us hurtling through the streets of San Francisco and New York City, respectively. While a kick-ass chase can lift a mediocre film to greater heights, it really helps to be invested in the characters. If we don't care about their success, then we're just enjoying an exercise in style. That approach isn't necessarily a bad thing, but the lack of emotional stakes drops the scenes a few notches on my list. I haven't seen the 2000 remake of Gone in Sixty Seconds, but I suspect that many people aren't as aware of the low-budget 1974 original. For this Readers' Choice Marathon, Joel Burman of Deny Everything passed along a cool list of interesting movies. I choice this one because I'd heard raves about its high-octane chase. Joel is also the Shepard of the LAMB (Large Association of Movie Blogs) and does an amazing job running the show there. You should definitely visit both sites right away. Let's check out the questions!

So, what's this story about?
Maindrian Pace (H.B. Halicki) works on the level as an insurance investigator, but he also lives a double life as a car thief on the side. He takes on a daring job from a South American drug lord to steal 48 unique car models in five days. This seems like an impossible task, but the prize for completing this job is $400,000, so it's worth the risk. Pace has a certain code that requires that all the cars he steals are insured, which makes the job a lot trickier. The heist appears to be going really well, but nabbing the final car might be a different challenge. Attempting to grab this yellow Mustang sends Pace on a high-flying chase through Long Beach and the surrounding counties as the cops feverishly pursue him. 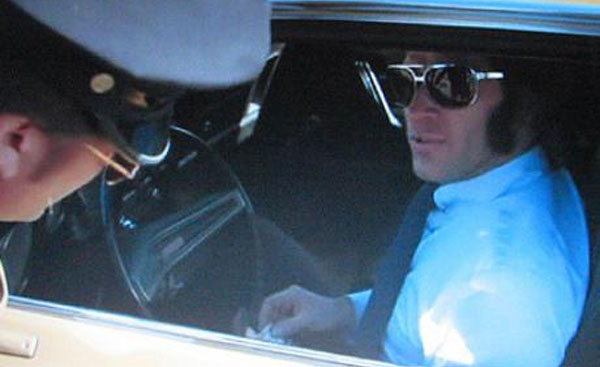 What are the major themes, and how do they connect to the key issues of that time?
Gone in 60 Seconds is not the type of movie that requires much delving into deep themes. We briefly meet the members of Pace's team and learn the basics of the plot, but there's little that's very interesting during that time period. There are some clever ways that the guys steal the cars that involve trickery more than superior lock-breaking skills. Drivers sometimes just leave the keys inside their vehicles, which makes it way too easy for the thieves to succeed. Having Pace only steal cars that are insured as an interesting touch, especially since he actually returns cars because they don't fit this rule. It makes him seem a bit more honorable, but he doesn't seem to mind creating serious havoc while zooming through the streets. This movie's all about showing the car chase, and the rest is mostly filler to prepare for that sequence.

Are the characters believable and fully drawn?
Although there are some oddball characters, they're not important to Halicki in this story. He tries to create a world of car thieves and other hoodlums, but it's again just a set-up for the final showdown. The most engaging character is Pace himself, and some of that is due to Halicki's more believable performance. He's still pretty flat, but he's memorable in comparison to most of his buddies. His girl Pumpkin (Marion Busia) is thin and spends the entire movie hanging out in the office and answering phones. We're pulling for Pace to escape the cops in the end to extend the chase, but I didn't really care if he actually finished the heist. 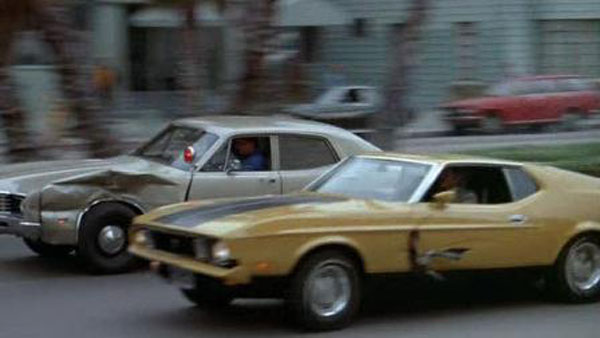 What are some of the most memorable scenes?
The definitive reason to see this movie is the 34-minute car chase, which is the longest is movie history. After a long set-up, the excitement picks up when the pursuit begins. Pace is driving the yellow 1973 Mustang Mach 1, known as "Eleanor". I enjoyed the touch of having each type of car known by a different woman's name, though it was a bit confusing at first. Many cop cars are destroyed during this chase, which is worth the price of admission. Even more interesting is what it took Halicki to pull off this sequence. He bought the police cars and other city vehicles at an auction for $200 each, which  made it a lot easier to destroy them. His style of putting the cameras right inside the cars also leads to a lot of intense moments, particularly as the stakes rise near the end. This is maverick filmmaking at the highest level, which gives it a different feeling than modern chases. The closing jump by Eleanor is a remarkable stunt and remains impressive when viewed nearly 40 years later.

How’s the direction? Is there an original vision?
Halicki (The Junkman) was involved in every aspect of this movie and served as the director, producer, and star. He even did his own stunts during the car chases. The entire production is definitely his vision, which served the driving scenes very well. The downside is that he cares little for the other parts and didn't even prepare a script for most of it. The non-professional actors improvised and did their best, but it's clear Halicki only really concerned about the big sequence. Sadly, he died in 1989 while filming a car chase for the sequel to this movie. It's a tragic end to an original guy, but it seems strangely fitting given his approach to this movie. He shoots the chase scenes well and understands how to make that action work. He just can't find a way to make the rest of the movie even passably engaging. 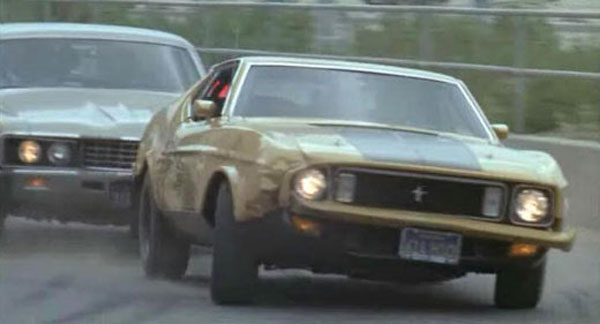 Would I recommend this film to another friend?
Gone in 60 Seconds is one of those tricky movies where you really need to know your friend before recommending it. Some viewers will drop out before we even get to the car chase, which occupies the final act. If they aren't interested in cars and action, they shouldn't even bother. The entire draw of this movie is this sequence, which is pretty awesome. That said, I'm still unsure if I liked it on the whole. It was worth seeing for the chase, but does that make the movie a success? If Halicki had even spent a little bit of time on the characters, it would have made that scene even more thrilling. I'm curious to see if the remake tries to fix that issue and can even come close to matching the big action moments. I'm planning to check it out later this summer.
Film Review