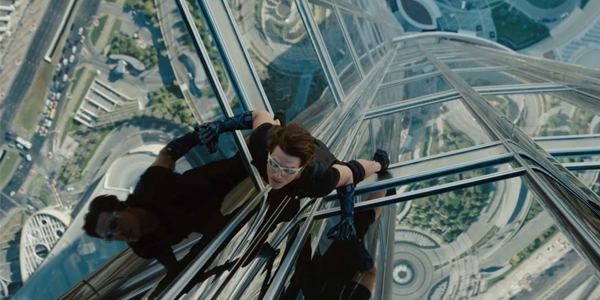 The Mission Impossible franchise is one of those rare series where the style varies dramatically based on the director involved. Each of the four movies is an individual story that barely connects to the previous works. In a sense, it functions more like an episodic TV series than a closely connected adventure. Supporting characters appear in multiple films, but they don’t relate much to the past missions in terms of the plot. The one exception is Tom Cruise, who brings some development to Ethan Hunt with each successive entry. Physically, he’s a super hero who can take a ridiculous amount of punishment, but his emotional ties connect across the series. That said, the latest film jettisons the more intimate feeling of the previous installment and focuses more on over-the-top action.

Ghost Protocol introduces Brad Bird to live-action cinema, and he passes the challenge with flying colors. The biggest plus is the rapid pace, which rarely gives us a chance to breathe. From the high-flying prologue with Agent Hanaway (Josh Hollaway) to the final showdown in Mumbai, the story moves at a breakneck speed. It’s a testament to Bird and the writers’ skills that we’re able to follow the plot without much difficulty. The exposition appears in the midst of the action, and it never feels like the characters are explaining just for our sake. Similar to Brian Depalma’s 1994 first film, Hunt and his team are playing catch up against a foe that’s always one step ahead. With few gadgets and no support, their chances are even slimmer this time to save the world from imminent destruction.

Hunt begins the story in a Moscow prison but is extracted by Agents Carter (Paula Patton) and Dunn (Simon Pegg). This is her first time working with him, but Pegg’s Dunn did appear in the previous movie. Following this escape, they’re off to the Kremlin on a daring mission to infiltrate its archives. Following a surprise disaster, the US President institutes “Ghost Protocol” and disavows the IMF. This is not good. Joined by the mysterious Brandt (Jeremy Renner), they make a last-ditch effort to stop the terrorist Kurt Hendricks (Michael Nyqvist). There’s little mystery to who’s behind the attacks, but stopping him is another story.

The film’s show-stopping sequence occurs at the Burj Khalifa and lives up the hype. Cruise’s character actually climbs up the side of the building hundreds of feet above the ground, and it’s a thrilling sequence. While the home viewing can never match up the excitement of seeing it on the IMAX screen, it still works pretty well. Although it’s the high point for pure thrills, Bird wisely follows this scene with a memorable chase through a sandstorm. We feel the same confusion as Hunt during his relentless pursuit, and even a brutal head-on collision fails to stop either guy. The rest of the movie can’t possibly live up to this combo, but it remains entertaining right up to the end.

Mission Impossible: Ghost Protocol feels surprisingly fresh when you consider the lukewarm reception to the third installment. I don’t believe that J.J. Abrams film gets its just due, but I still wasn’t clamoring for a fourth movie. The fact that Bird delivers such a knockout action movie is a great surprise and re-invigorates the franchise. Cruise’s off-screen antics have hurt his credibility in recent years, but he brings it once again as Hunt. It’s remarkable that he’s nearing 50 years old and can still work at this physical level. He also has good chemistry with the supporting players, especially Simon Pegg. Nyqvist may be a forgettable villiain, but he’s basically secondary to the story. Hunt’s team is facing huge barriers and must do some remarkable things to even have the chance to stop Hendricks. That against-all-odds atmosphere permeates this story and makes it one of the best action films of 2011.
PopMatters