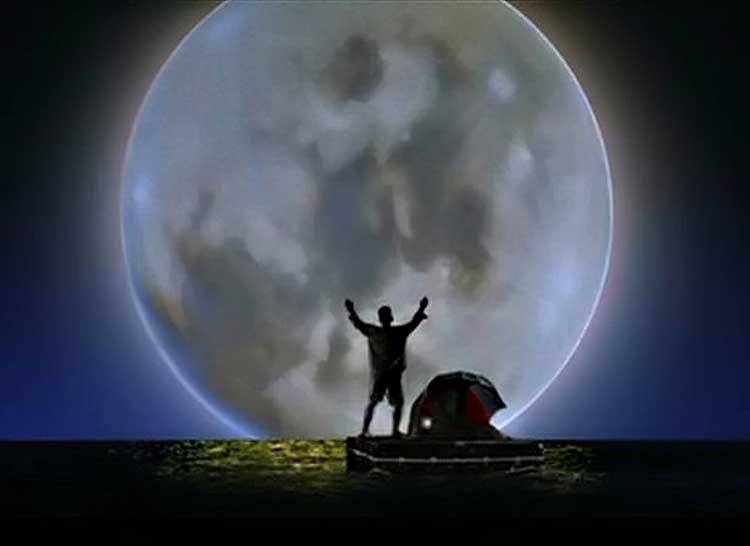 Just one year after stumbling through the mess of The 'Burbs, Tom Hanks starred in an original film that was considered a major flop. Admittedly, Joe Versus the Volcano was a financial loser, but it’s amazing to note how well it holds up today. I’d actually never seen this surprising movie until this year and hadn’t been that interested. The over-the-top marketing didn’t attract me as a 14-year-old, and that impression has stuck with me over the years. Instead of selling it as a modern-day fairy tale, the trailers focused on the plot’s oddball elements. That turned out to be the wrong approach, and Hanks and Meg Ryan weren’t yet the box-office megastars they would become in the years to follow.

Hanks stars at Joe Banks, a hypochondriac stuck in a terrible job who almost seems relieved to learn he has a terminal illness. The office requires a slog through nasty mud just to get there, and the building offers no windows, coffee kiosks, or yoga rooms. This company obviously doesn’t believe in work-life balance. Feeling better than ever, Joe accepts a crazy proposal from the eccentric tycoon Graynamore (Lloyd Bridges) to leap into a volcano on a remote Pacific island. He boards a fancy sailboat led by Patricia (Meg Ryan), the rich guy’s daughter, for one last adventure.

Writer-director John Patrick Shanley has the challenging task of crafting the upbeat fairy tale without shifting too far in the hokey direction. Joe and Patricia face danger from a massive storm and shipwreck, but we never feel like they’re in true peril. Also, they’re too busy enjoying the ride and falling in love to notice the crazy events. After arriving at the island, they meet the Waponi natives, who have a serious love of orange soda. Their tribal leader is played by Abe Vigoda, which shows the high level of authenticity that’s present.

The ultimate leap into the volcano feels like a grand statement about grabbing the reins of life, which is interesting since they’re likely committing suicide. Hanks regains the charming whimsy he displayed in Big and couldn’t truly locate in The 'Burbs. Ryan actually plays three very different characters that come into contact with Hanks. This calls into question whether Joe hallucinates the entire trip, but we never follow that theory. Hanks and Ryan sell the story so well that the oddities feel enjoyable instead of frustrating.

Joe Versus the Volcano is light-hearted fun, though the lessons learned never go into too much depth. Viewers who resist sentimentality might reject the positive tone, even with the appealing leads. If you’re willing to take the ride, however, there’s plenty to like with this movie. It hardly deserves the reputation of a fiasco regardless of the box-office issues. It’s an excellent choice for a rainy day at home, especially in the doldrums of winter.