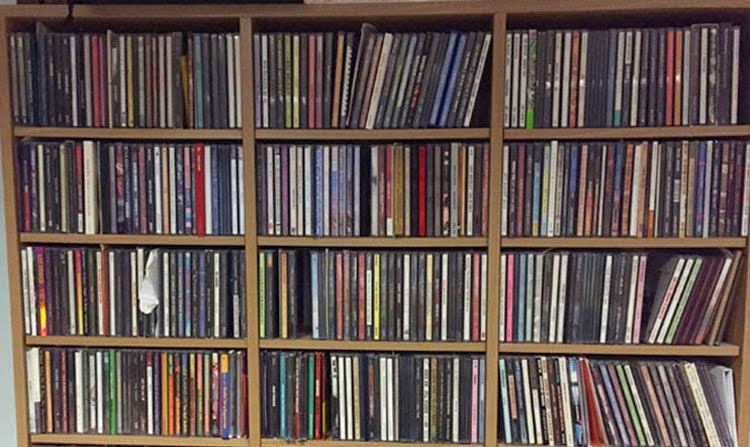 Anyone who moves into a new house knows that feeling. You have the luxury of space that was never possible in a small apartment. It’s amazing, but this bliss is short-lived. Little by little, the stuff
accumulates. The closets and cabinets fill up, and boxes conquer the basement. It only takes a few years to transform a serene haven into a frustrating mess. You aren’t ready to go on Hoarders, but the clutter can increase the stress in your busy lives. There’s an entire industry built on saving us from ourselves. Books and online articles with titles like “10 Creative Ways to Declutter Your Home” draw heaps of attention. It’s a fixable problem, but choosing to make the time and solve it isn’t easy.

We’re currently following this process at our house after living there for seven years. It’s been rewarding to eliminate stuff that has just occupied space for a long time. This process has led me to undertake a similar project with pop culture. When you write a blog about film and TV, it creates a drive to stay on top of everything. You’re essentially fighting a war on multiple fronts. New movies and shows arrive each week, and thousands of worthy titles from the past remain unseen. This push to cover all the bases can lead to amazing discoveries. It’s more likely to create an overwhelming sense of failure, however. The constant noise builds to a dilemma where there aren’t enough hours in the day to even scratch the surface.

The problems I cite are definite first-world problems. The technology that makes all this content available is incredible. Can't we just enjoy the ride? That’s the ultimate goal, but it’s hardly that simple. Maintaining a work/life balance is a major challenge for nearly everyone. For pop-culture obsessives, there’s another layer of obstacles. Even in a mid-size city like St. Louis, interesting cultural events happen nearly every night. When you add those concerts and film screenings to DVR and Netflix backlogs at home, it’s quite a pile. Books, podcasts, and magazines also scream for attention. Intellectual curiosity is a great thing, but it can lead to disappointments.

It’s thrilling to discover a lesser-known movie or band that blows you away. I haven’t given up that pursuit but have simplified the approach to getting there. In a similar way to decluttering a house, I’ve developed a more linear approach to pop culture. If I’m watching the fourth season of Game of Thrones, I should finish it before tackling five other shows. I borrow DVDs regularly from the library, and they’re usually available for a week. Taking out five at once makes no sense; it’s a waste of mental and physical energy. Having a stack of unread books waiting on the shelf also just leads to disappointment. This approach has helped me to focus on what really excites me.

Before continuing, I should clarify my positions a bit further. This isn’t a manifesto that everyone should follow; it’s more of a personal mission statement. Some film bloggers watch 400-500 films in a year and write about most of them. I marvel at their dedication and love the idea of their singular passion. It takes resilience for even the most ardent cinephile to follow that schedule. Most are not writing about films as a full-time job, so this quantity is mind-boggling. I’m not criticizing those achievements. What I’m seeking is the right amount of material that fits within my life.

Having an obsessive personality makes it even more challenging to lessen the pace. When I'm asked to appear on a podcast or write for another site, my first inclination is to say yes. It's a challenge to recognize my limitations even when the opportunities sound enticing. It's only when I think about all the different obligations that I realize the flaws. Last fall, I decided to try and post every day on this blog. I wrote during lunch breaks and pushed myself to expand the audience. It wasn't a satisfying experience. Writing became less fun, and that frustration showed in the final product.

Another factor is my current place in life. I’m 39, married, and have two amazing daughters (6 and 2). When I was 23, paring down my pop-culture activities would have sounded ludicrous. I gathered heaps of DVDs, CDs, and books to consume down the road. Life changes, and that’s okay. This doesn’t mean that being excited about pop culture is immature. Back in 2012, I wrote a piece on “Appreciation vs. Obsessive Consumption”. I’d been writing this blog for a year and was battling the push to see everything. Three years later, I’m building on that premise with my life. I’m asking “what do I really love doing?” and focusing on those activities. Writing is on the list but not as high as it once was. After sitting in an office all day, spending my nights in front of a screen feels restrictive. Playing tennis, taking a swim, or going for a walk often beats turning on the computer or TV.

It's important to recognize the opportunity cost for any decision. If I decide to play tennis on a weekday evening, that activity replaces another option like watching a movie. Leisure time is a wonderful thing, but there isn't an infinite supply. The amount of hours is the same, and we can't have it all. Pop culture decluttering allows me to recognize the most rewarding use of my time. The wealth of options sometimes makes the process feel like work, particularly for bloggers. Even if we love writing and running our sites, it's easy to start treating them like a painful chore.

While I’m focusing on habits, there is also a physical aspect to these decluttering goals. My DVD and Blu-ray collection isn’t as robust as some film fans, but it does contain unnecessary copies. For example, I’ve seen Alfred Hitchcock’s Strangers on the Train multiple times. It’s a great movie, but I don’t have plans to revisit it anytime soon. When I’m ready to re-watch that film, locating it will be easy. I cite this example because it isn’t a bad movie that’s easy to eliminate. It reveals the limits of needing such a large collection. It’s like the Seinfeld question where Jerry asks George about why he keeps so many books. If I’m not planning to watch the movie, is it just a prop to show off to visitors?

This project is going very well; I’m enjoying the experience more and not getting stuck in old patterns. There is a lingering question that hangs over these changes, however. How do I still write a film blog when I’m less absorbed in the medium every day? If I’m not as engaged by writing movie reviews, what do I write about here? It’s possible that this site has run its course, and that’s okay. I started Public Transportation Snob as a writing project and way to dig into unexplored corners of the movie world. My interests don’t seem to fit with that model anymore. I’m still in the midst of my pop culture decluttering, so where I land may determine the site’s future. For the moment, I’ll continue this journey wherever it goes.
Essays