The World That I See: Reads and Listens #9

An interesting discussion arose last week about the importance of describing form in film writing. It started with Ted Gioia’s piece for The Daily Beast that derided the “lifestyle reporting” that has overtaken music criticism. He labeled it the “Bieberization of arts journalism” and makes incisive points about these trends. While it’s a simplification, that doesn’t mean that Gioia doesn’t strike on some key issues with the online culture. Sam Adams of CriticWire used this opportunity and asked “Do movie critics need filmmaking experience or an understanding of film theory to do their jobs?” to the survey of critics. The responses were all over the map and included a firm answer from Matt Zoller Seitz of RogerEbert.com. On Monday, he expanded on his thoughts and took a tougher stand on the subject. Here’s a quote from Seitz’s piece that’s really stuck with me as a blogger:

“We have several successive generations of film watchers—some of whom consume TV and movies voraciously and have surprisingly wide-ranging tastes—who don't know how to interpret a shot, or how to think about what the size or position of characters in a frame might tell us about the story's attitude toward those characters. That's a problem.”

There’s a part of me that wants to reject Seitz’s assertion and look at him as a cranky guy angered by the progression of film writing. That’s far too simple, however. Looking internally, I have avoided digging into the form enough in my posts. It’s easy to write about a film, do some quick editing, and publish it. My interest in film writing started with a high-school class that gave me the chance to write long pieces analyzing movies. While these papers were certainly terrible, they did consider the technique behind the art. This approach continued during college film courses that offered more background on the standard terms to describe the process. I’ve lost much of that knowledge along the way, and it’s time to dig back into the basics of filmmaking. It may not affect my writing directly, but I’m doing the research. 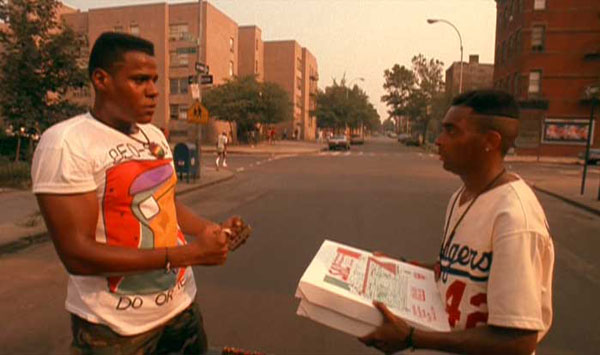 The lineup for the 2014 Ebertfest was announced this week, and it’s filled with movies that would be amazing to catch on the big screen. It opens with a screening of the documentary Life Itself, which should be very emotional for the attendees. Guests will include Spike Lee for Do the Right Thing, Oliver Stone for Born on the Fourth of July, and Ramin Bahrani for Goodbye Solo. I won’t be able to attend this year, but making it to Champaign for this festival is on my unofficial bucket list.

Matt Singer didn’t care that much for Veronica Mars, yet he came out of the experience feeling great about what it signifies. His intriguing piece for The Dissolve talks about the ways the movie doesn’t try to cater to non-fans to draw in a larger audience. It may not bring in huge crowds but accepts the fact that the viewer knows these characters and doesn’t need a long refresher about each one.

My interests in film and reality television crossed paths when Rob Cesternino appeared as a guest on the Battleship Pretension podcast with Tyler Smith and David Bax. I’m a big fan of their work, so it was fun to have them invite Rob to discuss the topic. As a blogger for Rob Has a Website and a Survivor fan, I enjoyed getting a different perspective on reality TV and Rob’s background. Speaking of Survivor, fellow blogger Josh Wigler listed his "Top 10 Strategic Moves Ever on Survivor" for Vulture. His picks cover the entire series and don’t just include the most obvious choices. You could argue for a few other moves (the Edgardo vote in Fiji is a favorite), but it’s hard to push back against any of these examples. Josh has quite the expertise when it comes to the show’s history.