The World That I See: Reads and Listens #4 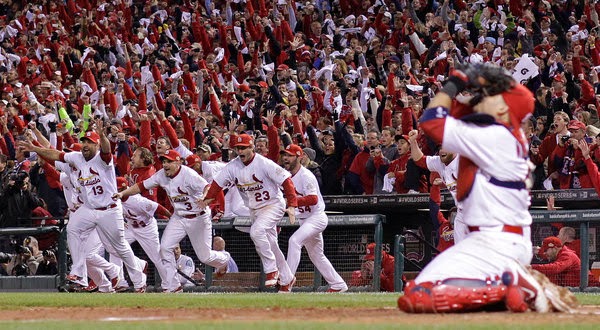 This week, my family is remembering the life of my grandpa, who passed away at the age of 98. While it’s a sad time, I can look back on so many great memories. What can you say about a guy who nearly lived an entire century? He was a devoted fan of the St. Louis Cardinals and watched basically every game. This season’s going to feel different without a few nights watching them with him. I feel like the photo of their celebration from the improbable 2011 World Series victory is the most fitting way to start this post.

Here are some other interesting pieces and podcasts that I checked out this week:

The writers at Movie Mezzanine celebrated Valentine’s Day by discussing the moments that made them love the movies. There are some classic examples, including Goodfellas, Mulholland Drive, and even the thrills of The X-Files. It would be hard for me to nail down one, but a lot of their choices played a role.

Linda Holmes is the charming host of NPR’s Pop Culture Happy Hour, and she’s joined film critic Bob Mondello for a fun series of videos called "Bob and Linda Read Internet Movie Reviews". They take a few minutes to read comments from Rotten Tomatoes that hit all ends of the spectrum about the Best Picture nominees. Here’s a recent clip about Gravity.

The release of Jose Padilha’s remake of Robocop has sent many writers back to the original Paul Verhoeven version. Tim at Antagony & Ecstasy does an excellent job delving into the reasons that the 1987 film still packs a punch and sidesteps the usual comments. You should add his blog to your weekly reads.

Last Friday, I wrote about the worst villains of the Bond franchise, and Steven from Surrender to the Void shared a massive post he wrote a few years ago covering the series. It’s a tremendous read for Bond fans, and I still need to delve in and respond to his points. Steven is a prolific writer and watches a lot of movies from across the world of cinema.