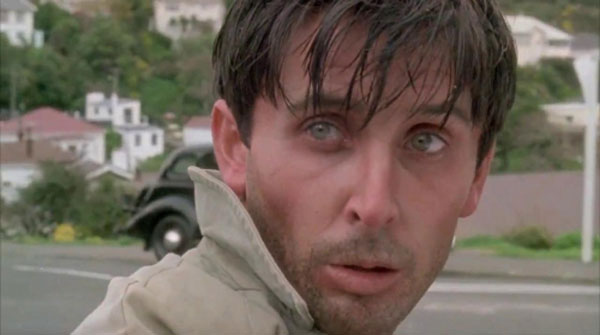 This week, I joined a group of intelligent bloggers on the LAMBcast to discuss Peter Jackson’s 1992 gorefest Dead Alive. While this offbeat zombie film is different then his recent blockbusters, his technical expertise is apparent. The practical effects are stunning and ridiculous, which makes it worthwhile even if you aren’t a fan of horror films. I’ve seen most of the classics but wouldn’t call myself an aficionado. Even so, there was plenty here to make it a fun experience. The blood and guts are played for comedy, so it isn’t the type of movie that will induce nightmares. It may be unpleasant at times, particularly when bodies are being reduced to slimy zombies. Slime is flying everywhere, and Jackson mines plenty of icky moments in the early going. When the chaos picks up, the gore is so pervasive that it’s tough to even keep up with all the craziness that’s on display.

Timothy Balme stars as Lionel Cosgrove, a mild-mannered guy who’s connected a bit too closely with his mother Vera (Elizabeth Moody). She’s a nasty individual who keeps him confined with manipulative tactics. When he goes on a date with Paquita (Diana Peñalver) to the zoo, he mother spies on them and hopes to break up the burgeoning romance. The grisly Sumatran Rat Monkey has been captured and brought to this zoo, and it bites her arm. This attack starts a transformation that makes her a zombie, and Vera starts bringing others into the fold. The silly part is that Lionel continues to care for his mother after her change. It’s clear that she’s not the same person, yet he can’t help himself and puts her in the basement with several other zombies. He seems to have the situation under control but inadvertently brings about a massive bloodbath. The final act is filled with outlandish violence and includes a zombie baby, an organ monster, and other gruesome evils. It’s hard to take anything too seriously, and the gags become more bizarre with each successive kill.

Dead Alive was the Movie of the Month for the Large Association of Movie Blogs, also known as The LAMB. It won the vote and became the feature topic for this week’s LAMBcast. It’s good to spotlight a lesser-known film that isn’t recognized by people who aren’t horror fans. It isn’t really my cup of tea, but I’m glad to have checked it out. It gives an interesting look at Jackson’s origins as a B-movie filmmaker. Joining me were guest host Jay Cluitt from Life vs. Film, Lindsay and Jess from French Toast Sunday, and Kristen from Journeys In Classic Film. If you like this film or are just curious to learn more, you should definitely listen to this show. We also gave our rants and raves of the week and played a game of movie knowledge. You can listen to this LAMBcast episode by clicking on this link.
Lambcast podcast