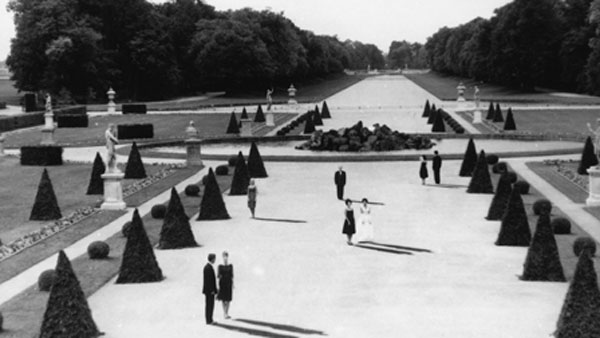 Last week, I was thrilled to join a diverse group of bloggers on the LAMBcast for the latest Movie of the Month. The surprise winner for February was Alain Resnais’ divisive 1961 film Last Year at Marienbad. Brian Roan from Dear Film was its champion and worked diligently to gain the win. This gave him the chance to get attacked from all fronts by the participants of this podcast. I was the only person who had seen this movie before, so it was a new experience for the other three guys. My response is mixed but gives Resnais more credit than the newbies. My challenge is discovering whether it’s a brilliant commentary on memory and cinema or a tedious exercise. In a strange way, this confusion actually matches the characters’ own difficulties with facing their past encounters.

The story takes place at a lavish chateau, where a man known as "X" (Giorgio Albertazzi) meets "A" (Delphine Seyrig) and tries to convince her they had an encounter last year. He goes into vivid detail about the rooms and gardens of this place, yet she refuses to believe the events actually happened. As he continues to hound her about the meeting, reality starts breaking down and makes us question if anything is true anymore. Hanging over the proceedings is "M", a strange man who may be her husband. Their connection isn't clear, yet he hangs just outside the frame and looms over the characters. It's a confounding story that is covering pivotal themes about cinema but in the most abstract way possible. Even a challenging film like Inland Empire feels straightforward by comparison.

When I watched this movie back in 2007, I wrote a piece about it for my brother’s excellent website Erasing Clouds. You should be following his new blog, which is sure to provide intelligent writing about music and other pop-culture pursuits in the upcoming year. It isn’t really my best work, but this excerpt from that post summarizes my thoughts:

“Film experts have undoubtedly spent countless hours dissecting each scene and have developed some clear solutions. Unfortunately, it’s fairly easy to poke holes in almost any interpretation because Resnais jumps so frequently into fresh territory. While viewing this film, I was often frustrated by the lengthy narration from X that made little sense. However, its effect has remained with me longer than some more-digestible fare.”

What I really enjoyed about this podcast was the fiery debate it generated throughout the discussion. While it’s fun to rave about some of our favorite movies, there’s something inspiring about having serious disagreements. This often leads to a better conversation and allowed us to dig further into the movie. Everyone stayed pretty civil and had fun even with the sharp differences in opinion. The other participants were host Dylan Fields of Man I Love Films, Nick Jobe from Your Face, and Pat McDonnell from 100 Years of Movies. We also gave some rants and raves about movie topics and played a fun game to challenge our knowledge. You should check out this podcast by following this link.
Lambcast podcast