Survivor: Philippines, "Gouge My Eyes Out" 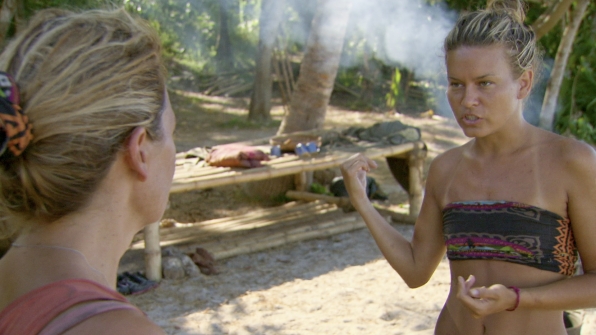 Several weeks ago, a four-person deal was struck on Survivor that wasn’t in any participant’s best interests. It seemed unlikely that either Malcolm and Denise or Skupin and Lisa planned to honor the deal. Apparently, this oath was stronger than considerations of what constitutes the best gameplay. Each pair would have benefited from betraying the alliance. Abi-Maria’s vote is up for grabs, and she is willing to do anything to stick around. Why wouldn’t someone grab her and try to control the game? The editing promises that Lisa and Skupin are planning to take out Denise, but they again pull back. The only chance that either has of winning is against the other, which gives them limited odds. Even though a final two is likely, these players don’t realize that’s a possibility. Lisa and Skupin are playing for a final three with little chance to win, and that’s maddening for viewers. I s there a scenario where this choice benefits them? If Denise wins immunity next week, she would probably join with them to take out Malcolm. In that case, a final two gives them a chance to force the jury to vote for one of them. Even if they make the end, this move would have sold the jury on a pivotal choice. For more details, check out my full review for Sound on Sight.

Looking at tonight's finale, it's tricky to make a confident prediction. My pick at the start of the season was Jonathan Penner, and he could have made it with a few different choices. All things equal, Malcolm is the favorite to win. The problem for him will be making the end of the game. If he doesn't win immunity, his chances go way down. Denise has a slightly better chance to make the end, but she faces some of the same challenges as Malcolm. I have no knowledge about what actually happens, but I'm getting a strange feeling that Skupin and Lisa make the end. If so, the conventional wisdom is that he would win because she's such a noncommittal player. The question mark is whether enough people like him to give out the million. Regardless of what happens, I'm looking forward to seeing how it turns out.
Sound on Sight Survivor TV Review