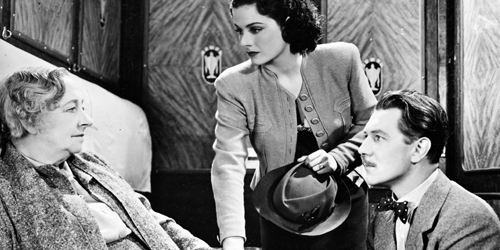 Alfred Hitchcock is one of the legendary directors in the history of film, and I say this without even seeing a significant amount of his movies. I've seen 20 of them, including the well-known pictures from his mid-career like Notorious, Vertigo, Rear Window, and North by Northwest. My blind spot rests in his early British career, where he used smaller budgets but created some remarkable little thrillers. A prime example is The Lady Vanishes, which I caught for the first time last month. The new Criterion Blu-ray release offered the perfect opportunity to discover this classic that mixes thrills, romance, a detective story, and a few laughs. It starts slowly at a hotel, but these moments comfortably introduce us to the key players. By the time we reach the final gunfight, we're definitely pulling for their survival. This story also employs one of Hitchcock's more ridiculous MacGuffins, an overly complicated device involving the memorization of a certain tune. It's a fun movie that holds up really well to repeated viewings even after the villains are known. For more details, check out my review for PopMatters of Hitchcock's last great British film.
PopMatters