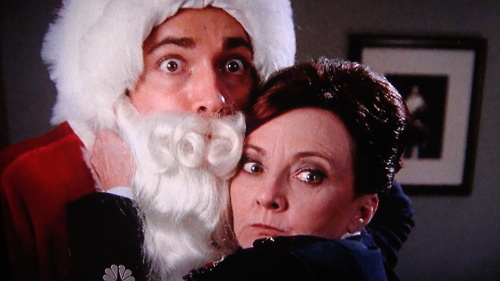 It's refreshing to see the resurgence of Chuck during the past few weeks. After jettisoning the one-note Decker as a key villain, they've raised the stakes and delivered two great episodes. The fifth season's opening stories had some fun moments, but the tone was inconsistent. Thankfully, the latest episodes have offered silly comedy plus enough drama to keep the tension. With six episodes left, it's a relief to feel excited again for this show's final run. There may be more hiccups, but there's a much greater potential for a strong finish.

"Chuck Versus the Santa Suit" brings back Brandon Routh as Daniel Shaw, a former CIA ally who's turned to the dark side. He's been pulling the strings all season, and it's time for Chuck and Shaw to meet face to face. How will Chuck and the gang defeat an opponent with the Intersect in his head? It will take the entire group (even a few surprise participants) to pull of this amazing feat. For more details, check out my review of this excellent Chuck episode for the fine folks of Sound on Sight.