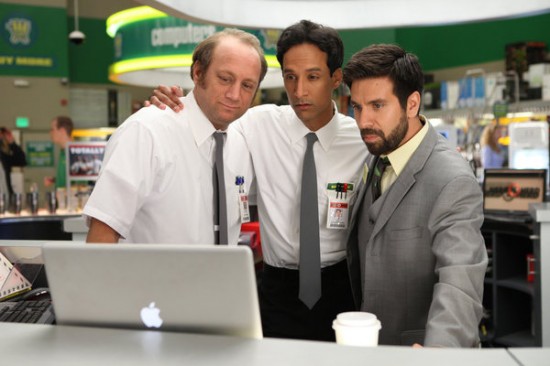 I've been watching Chuck since it premiered back in 2007, and there have been many excellent cameos from geek culture. This season opened with Mark Hamill playing a villain with a ridiculous accent and chewing up the scenery. This week, Danny Pudi from Community joins the expansive ranks with a silly appearance as a smooth guy who may be a new Buy More employee. His scene also includes a fun surprise that I won't spoil here from another recognizable face. It's a quick moment but adds just the right level of fun that's been mixing from a good portion of the fifth season. The silly events have often felt forced, while the main plot isn't consistent.

This week, Chuck and Sarah infiltrate a nudist camp to steal a nasty computer virus, and the results are a mixed bag. There are enjoyable moments and a few big twists near the end, so it succeeds overall. However, I'm still hoping that the future episodes strike a better balance of the main plot and the silliness. Right now, the primary story is still floundering, but there are some positive signs heading into next week. For more details, check out my episode review for Sound on Sight's great television coverage.
Sound on Sight TV Review