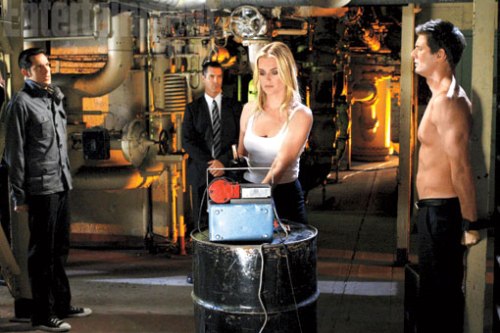 During its heyday of the second and third seasons, Chuck was the type of show that I'd recommend to friends. It took a slight downturn during its fourth year but still had some great moments. Unfortunately, its fifth and final season has been all over the map as the writers struggled to find a long-term story. There still are some question marks, but the sixth episode is easily the best of the season. "Chuck Versus the Curse" involves all the main characters in the action, which has been rare this year. Ellie and Awesome accidentally end up in the middle of the danger, which raises the stakes and provides some good comedy.

Rebecca Romijn guest stars as a rogue CIA agent trying to obtain a nasty computer virus from Chuck at any cost. The device is pretty much a MacGuffin, but it works because it's part of an entertaining story. I'm still a bit concerned about the season as a whole, though this episode's success is a great sign. It goes back to what made Chuck great in the first place and at least slightly renews my hope in the remaining episodes. For more details, check out my review for Sound on Sight's excellent TV coverage.
Sound on Sight TV Review