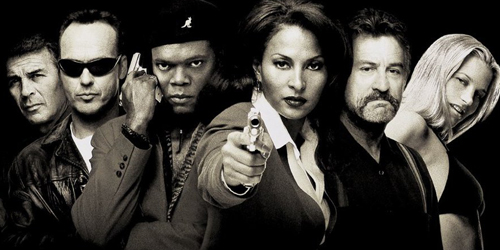 Ever since its 1997 release, Quentin Tarantino's Jackie Brown has remained at the top of my rankings of his filmography. While my feelings haven't wavered over the years, I wondered if the choice was a subconscious attempt to be a contrarian. I can't argue strongly against those who place Inglorious Basterds, Pulp Fiction, or either of the Kill Bill films at the top. I've enjoyed all those films, but they lacked that extra touch to make them a personal favorite. I revisited the Blu-ray release of Jackie Brown last week, and it reinforced my feelings that it's Tarantino's finest achievement. It combines the heist film with a love story and subtle offbeat comedy in an effortless manner. Pam Grier and Robert Forster are perfectly cast in the lead roles, and Samuel L. Jackson, Robert De Niro, Bridget Fonda, and others are excellent in supporting performances.

The success of Jackie Brown also comes from the combination of two inventive genre experts, Tarantino and Elmore Leonard. The story is based on Leonard's book Rum Punch, and it offers a unique mix of the two writers' styles. One of this the director's best moves is the soundtrack, which adds depth and style without ever becoming intrusive. Classic soul tunes like Bobby Womack's "Across 110th Street" and The Delfonics "Didn't I Blow Your Mind This Time" fit perfectly with the overall tone. Leonard writes great characters, with his best on-screen adaptations being Out of Sight, Get Shorty, and the TV series Justified. Tarantino changes the characters but retains their core elements. Check out my PopMatters review for more details on why this charming story remains my favorite Tarantino film.
PopMatters